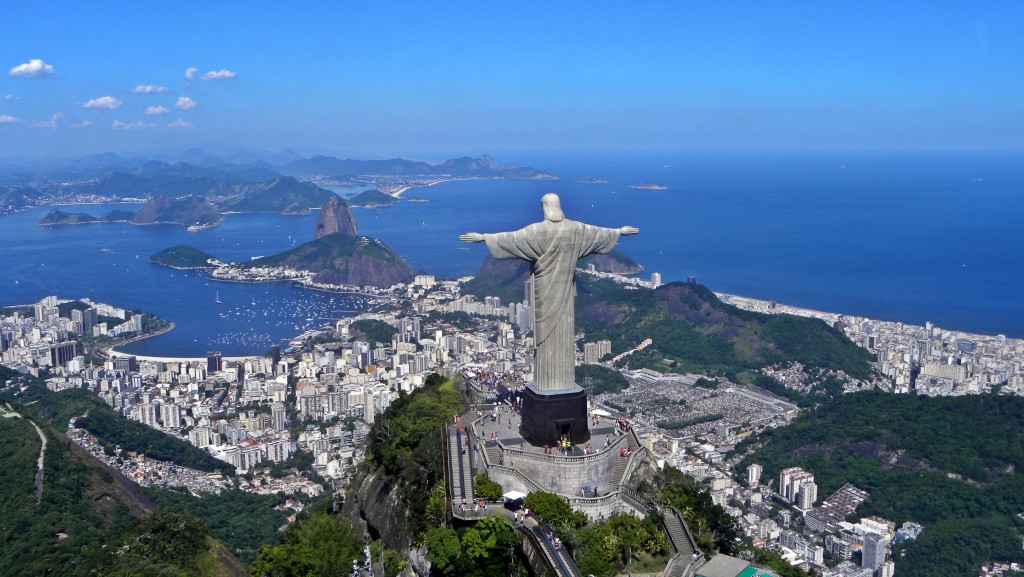 We’ve already explained how Rio’s Olympic sailing venue is literally full of crap.  Yesterday, our friends at Sailors For The Sea took aim at this nasty little problem; check out Tyson Bottenus’s take on it.

Last December Alan Norregaard, a Bronze medalist from the 2012 London Olympics, was just barely edging out Nico Delle Karth for first place as he approached the windward mark in the 2nd race of the 2013 Intergalactic Championships in Guanabara Bay, a rather large protected bay outside of Rio de Janeiro.

And then disaster struck when his 49er shuddered to a halt. He and his crew watched helplessly as the entire fleet passed by. Backwinding their mainsail, they peered into the murky water to see what had happened and what they saw was both infuriating and outrageous: their 49er was stopped dead in the water by a large plastic bag wrapped around their centerboard, floating haphazardly in the bay.

“I have sailed around the world for 20 years and this is the most polluted place I’ve ever been,” Norregaard told reporters after the race. He isn’t the only one complaining. This February, the Irish Sailing Team put out a request for funding to bring a doctor with them to Rio de Janeiro to assess “potential health concerns posed by untreated sewage water.” Stories and anecdotes are cropping up of dead horse carcasses and mattresses floating along the racecourse.

“The sewage is visible and we have identified it as a significant health risk to our athletes,” said James O’Callaghan, ISA Performance Director, to the Irish Times this February.

In 2016, sailing teams from all over the world will descend upon Brazil to take part in the Summer Olympics. Individuals and teams from around the world have been training for most of their lives for their chance to earn a medal. The least that can be hoped for is clean waters to compete.

Human impacts dating back to the late 1880s were found by a team of researchers when they analyzed sediment samples from the bottom of Guanabara Bay. But when these researchers looked closely, they found a significant increase in heavy metals dating back to the 1950s – approximately when Rio’s population began increasing exponentially. From 1950 onward, Rio’s population has ballooned more than 400%.

The effects of this population growth can be seen. According to the Associated Press, nearly 70% of Rio’s sewage goes untreated. Guanabara Bay is also the center point of a complex river drainage basin. Over 50 rivers flow into the bay bringing the untreated sewage and any disposed waste dumped from the 14,000 industries, 14 oil terminals, 2 commercial ports, 32 dock yards, more than 1,000 oil stations and 2 refineries that surround the bay.

A little more than a third of the 13,000 tons of solid waste produced every day in the Rio de Janeiro area is ejected directly into Guanabara Bay where it’s expected to make its way out with the tide. (Haven’t we learned that the solution to pollution is not dilution?) More often than not however, the trash ends up on Rio’s beaches and enmeshed in the meager mangrove forests that are left along the coast.

On top of that, three major oil spills have left a dirty mark on Guanabara Bay. While entering the Sao Sebastiao terminal in Guanabara Bay in 1975, an oil tanker from Iraq ran aground and spilled 70,000 barrels of oil. At the time it was the worst oil spill to ever occur in Brazil.

Twenty years later the Brazilian refinery operator Petrobras reported that a leaking pipeline had spilled over five times that amount. This put an immense strain on fishermen and their livelihood on the bay. Three years later Petrobras again admitted fault in yet another oil spill, this time because they had failed to install modern sensors on their pipelines.

The result was utter devastation. Brazil experienced an economic downturn as Guanabara Bay’s fisheries collapsed, leaving fishermen to find other sources of income. Environmental groups were furious at the level of incompetency demonstrated by Petrobras as Greenpeace protested by leaving oil-soaked birds and by chaining themselves to the railings outside of Petrobras’s headquarters.

As of today, there are less than two years till the 2016 Olympics. Can Brazil clean up over a century of economic development in the blink of an eye?

The Olympic Games have long been derided from an environmental standpoint as an unsustainable event. Think about all the resources that go into making the Games happen. Stadiums need to be erected, ski slopes must be carved, vast quantities of bottled water need to be on hand. It’s safe to say that the relationship between sport and sustainability is not always the most harmonious.

But if Rio is serious about it’s commitment to cleaning up Guanabara Bay, then this commitment has the potential to change the relationship between sport and sailing. For the sailing to happen, change must happen alongside. Only time will tell what kind of legacy Rio 2016 will leave behind.

blazers not required When we April fooled many of you about US Sailing inviting the Ed and me to keynote the Yacht Club Summit last week, we were only half-joking.