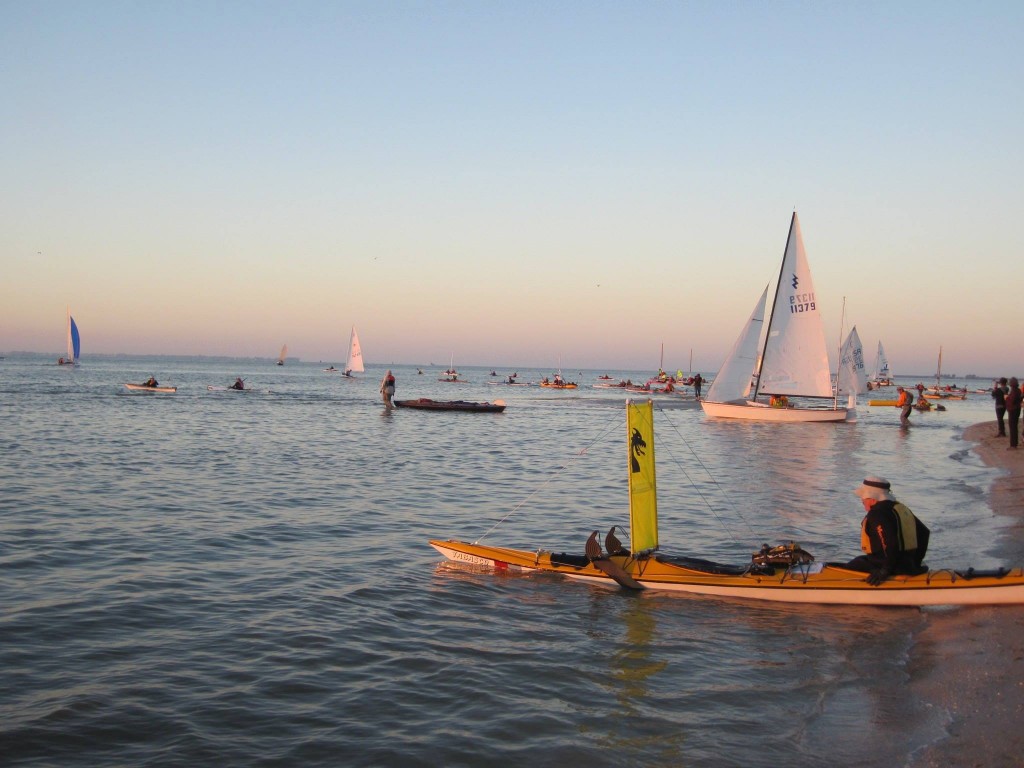 SA’er “zerothehero” filed a number of reports from the most unique race in all of sailing; the paddling, sailing, portaging, and pushing Watertribe Everglades Challenge.  You can see all his reports as well as a pile of other info and video in the thread, and below is a great excerpt.  Photo from another SA’er – Tom Ray.

So dinner in the boat was a bad idea for me.

After clearing the last of the mangroves we settled in on port, and after about an hour, Per got to dinner.  Earlier, my cafe con leche had spilled in the bilge and I had only gotten a few sips.  Oh, well.  The dinner had also fallen in the bilge, but I thought I had saved the top one.  So after Per ate, I opened my container to find it full of water!  One problem with that: Per had been peeing in the bailer which had a crack in it so who knows what was in that water.  Not eating that!

Per analyzes the numbers and says that, under current conditions, we will need to head out 25 miles to lay the cape.  I answer that there’s no way I am sailing 25 miles off shore in a Lightning at night.  We analyze the conditions constantly and come up with a theory; the wind will back more and more and we may not have to tack at all.  The wind was strong and we were going to weather, making sleep very difficult.  We both managed a little, but really not enough.  I developed a headache and wasn’t feeling great, I was starting to not take care of myself properly and this would become an issue later.

That night I had vivid hallucinations: The stars were traced into made-up constellations.  It was very cool but unnerving at the same time.  I kept thinking I could see shore even though I knew we were well past where we could see it.  There was a phantom palm tree following me just off to port, and we were 11 miles off the Everglades.  While sailing along in the dark we suddenly stopped, and a really weird feeling came over me.  I clicked on my head lamp and looked at the water, we were in the middle of a huge boil of water upwelling from below.  The water was full of sand and grit and had a strange color to it.  Spooky.  We pulled up the centerboard and rudder and drifted off the boil, finally free of its grip.  All-in-all, an unsettling experience in a night of them.  Even as far offshore as we were, the water depths are only around 20 feet or so and there are several currents converging out there.

Our theory on the wind played out and we kept getting lifted.  A little before dawn, we passed East Cape close enough to hear the birds.  As dawn broke, SOS and Poptarp came screaming out of Checkpoint 3 in their tri, Mosquito.  They gybed, and passed us to close to leeward.  Great looking boat.  In our 2 second conversation, we learned they were going outside, the long way around.  Not so painful in a boat that can do 20+ knots!  We continued tacking up into CP3 and a while later we saw Sambasailor leaving the CP.  This put the fire in Per.  We analyzed their course and figured they too were going south.  Per decides we are going to strike out across the bay, it’s our only option if we want to try and beat Sambasailor.  We get into the checkpoint, grab some food and caffeine, use the facilities and leave.  Total time in CP3, about 20 minutes.  Up next, the exciting finish…Read on.

Environment, US Gov stays out of your bilge