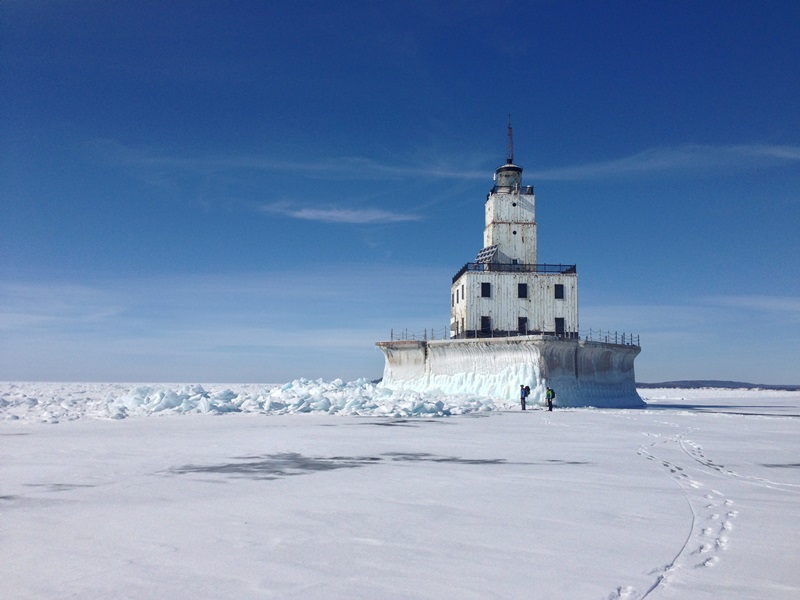 Tens of thousands of Chicago Mack crews will know what this landmark is even if they’ve never seen it look like this.  Check out this story of a recent hike – the first attempt in some 40 years – from Glen Arbor, MI to North Manitou Island.

On Thursday, March 6th, 2014, we attempted something that hasn’t been done for 40 years: to hike the treacherous ice across the Manitou Passage to the islands 8 miles out.

In the 1970’s, Bob’s father and two brothers left the shore in Glen Arbor early one morning to attempt the crossing. They were cut off by open water a mile from South Manitou. Their hike took so much longer than planned that Bob’s mother called the Coast Guard in panic! Having heard his father and brother tell stories of the adventure, Bob has been waiting for his chance to hike to the Manitous for decades.

The winter of 2013-14 has been one of the most severe in living memory. It has seen temperatures plunging to -20°F, enormous amounts of snow, polar vortices, and fierce storms. The near record-level ice coverage on Lake Michigan has been a big part of the story, as have the amazing ice caves along the Leelanau shoreline.  All this cold weather and ice build-up allowed us to attempt such an adventurous (some would say foolhardy!) hike.