you know what it is

Rob Shaw wraps up the double handed win on Blink in the North Island Two-Handed Race. 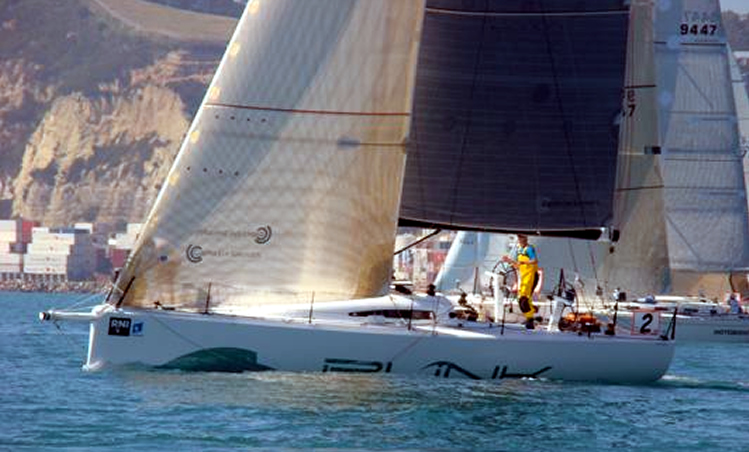 We kind of knew what to expect when our weather consultant Mike Quilter cheerfully said ‘Looks like you can vacuum pack the gennakers for this leg’. The fun was over in terms of gennaker rides and it was going to be on the wind or a two-sail all the way back from Napier to Auckland.

We started once again in super-light conditions, and edged our way across Hawke’s Bay to Portland Island at the tip of the Mahia Peninsula by later afternoon. We had a slight lead on the fleet but managed to lose it after a headsail change went wrong. Bushido was as usual in close company but they stayed inshore as we took a long board out to sea, putting in a couple of reefs and getting down to number four jib as the wind built.

After an uncomfortable night we headed back inshore again and came back together with the Bushido north of Tolaga Bay, with us about three miles ahead. The wind had settled down again and we had a reasonably pleasant if intense day exchanging tacks with them, keeping a cover as we headed for East Cape.

Once we were around the cape the next phase of breeze set in, giving us a decent two-sail and a chance to actually eat a freeze-dried meal and have a bit of a sleep. Then the wind started to build again as we reached across to White Island. We got the timing of the next shift right and laid through between the island and the Volkner Rocks, while Bushido was forced to tack behind us, giving us a little bit of a jump. We then got the forecast shift to the south and we able to tack and start reaching rapidly across the Bay of Plenty and up the Coromandel coast, laying the Mercury Islands. We had pulled out to a lead of about nine miles by this stage but we were conscious of getting as big a lead as possible before going around Cape Colville and coming back onto the wind in the forecast fresh southwesterly.

We were quite keen to go outside the Mercs but as ‘the beach boys’ as we had dubbed the Bushido crew seemed likely to go inshore, we thought we had better cover them. As we approached Cape Colville we listened to the Hauraki Gulf forecast and nowcasting and got set up for 25 knots gusting 30, with the number four jib and two reefs. It turned out to be much fresher than that: as we passed Channel Island it was already 30–35 and the nowcasting was recording gusts of 40 on the island.

We laid a big board over to the back of Kawau Island, with the wind slowly turning south. We had a major dilemma: we were way overpowered with the number four, but changing to the storm jib, with the way the inner forestay was set up and the bullet hank system on the jib, was just impossible in those conditions. We went bareheaded for a time as darkness came, knowing that Bushido would be eating into our lead but damned either way. We just hoped the wind would abate as the night came on, to give us some relief.

By the time we got the storm jib on tacked at Kawau and started heading down the coast towards Auckland, the breeze was topping out at 48 knots and had shifted into an even more southerly direction, making it a dead maggot all the way down. The sea was rough and visibility was challenging: we kept a close eye on the chart plotter as we picked our way down the coast through the Tiri Channel and past a few notorious reefs and rocks.

We could see Bushido’s lights ahead of us and knew there was no way we could catch them. The wind lightened a little and we really needed to go back to the number four but we had run out of time to go though that performance again. In the end we cruised into the finish in a puffy Waitemata Harbour around 2am, about 12 minutes behind Bushido, who had gone back to full main and number four.

We were utterly exhausted and disappointed to have lost our lead in the final stages, but had done enough to fulfill our goal of being the fastest boat around the North Island and win the race on total elapsed time. We hadn’t really slept or eaten for 36 hours, so after a quick pack up it was a quick rum then off to bed for quite some time.

Finishing the race — let alone winning it — is a huge achievement, and a great honour for the 22 boats that made it round this year (compared to the 2011 race, when around half the fleet was forced to pull out, everyone completed the race this year). It’s a great event, with a tremendous feeling of camaraderie on shore as well as some fierce competition on the water.

I feel honoured to have been able to share in Tony and Vesna’s Wells’ vision for Blink and to have got to know her really well as we pushed her hard around the North Island. It was a totally different experience to going round in Karma Police three years ago and I don’t think it could be topped…but ask me again in another three years…

A huge thanks to everyone involved, especially our Blink Shore Team!