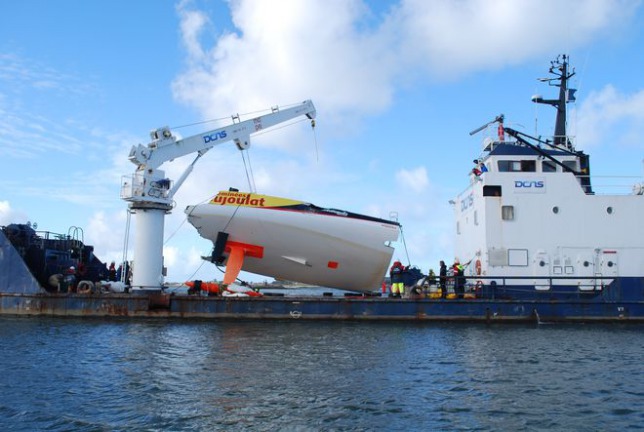 Having followed Bernard Stamm and his Cheminees Poujoulat program for years, we have a few lessons to share with prospective Open 60 skippers.

1) “Win or Break” may be a silly axiom, but when it comes to sponsor exposure, nothing is truer.  And “Just Break” may be even more effective, especially when you pick the wrong designer and have no chance to win.  Proof:  Bernard and his sponsor have gotten more press since his Juan Yacht Design cracked in half on a delivery sail in December than he ever received sailing around behind the lead pack in any major race – except for when he crashed into an island.  And then again he got a lot of notice when disqualified by the Vendee Globe for outside assistance.

2)  As a follow-on to (1), if you want lots of exposure for your major race campaign, bring in JuanK to your design team.  We’re not saying that any of the recent disasters were his fault – after all, a big boat is a big project – but between the Artemis AC72 disaster, Cheminees implosion,, and Rambler 100s capsize and near-death experience, nothing can get those journalists fired up quite like a JuanK boat.

3) Nobody takes care of their boats like the French (and their kissing cousins, the Franco-Suisse like Bernard).  What American, Italian, or British skipper would spend months finding and recovering a boat that won’t even work as a garden planter? Remember during the infamous Route Du Rhum when half the ORMA 60 fleet was lost?  Only French boats made it back, often upside down and useless.  And guess what?  Some of those boats are still sailing today.  It’s no wonder the French can keep finding sponsors – the French sailors will just about die for them!  And you’ll never catch a Frenchman polluting on the ocean.  Unfiltered cigarette butts don’t count.

We joke, but only just.  Keep up with the latest on Stamm’s busted up ride here.