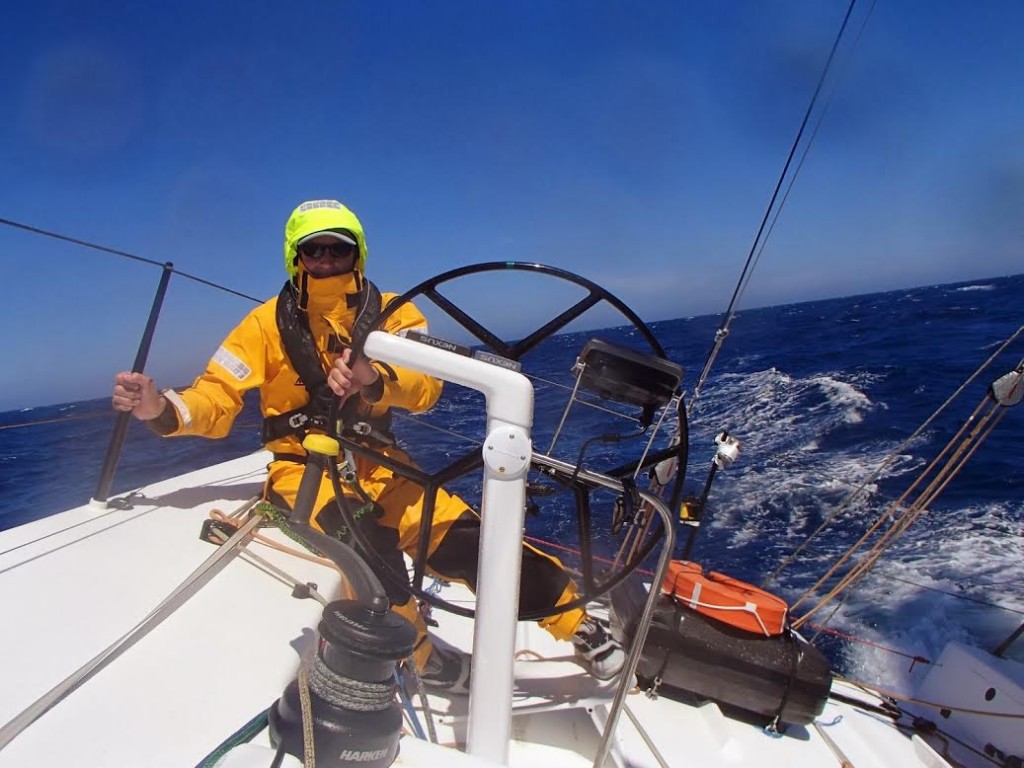 Rob Shaw on the Blink gives us the real

If you’re going to sail two-handed around a small island in the Roaring Forties, sooner or later you are going to get a bit of a kicking from the weather. This time we got it on the third leg, from Wellington to Napier (although with one more leg to go, there’s still potential for another one).

This RNI leg started out benignly enough, with ‘windy Wellington’ turning on a stunner of a day and very light winds for the late afternoon start. We drifted out of the harbour into a very light southerly and ghosted across Palliser Bay to take part in a full-fleet Cape Palliser park-up as night was falling. Our main competition, Bushido, managed to get away first, and as we finally wriggled free (leaving some boats to spend most of the night there) we knew we had some catching up to do.Heading up the Wairarapa coast — an inhospitable stretch of shore with nowhere to go if anything goes wrong — we stayed reasonably close in overnight, then started to head a bit further offshore in hopes of hooking into the right-hand shift our weatherman Mike Quilter had predicted would come in the afternoon.

The breeze steadily built as we headed out, until we had 35 knots on the nose. We bashed along under two reefs and number four jib in a big sea for about 12 hours, but other boats had it for longer. That’s Blink owner Tony Wells driving to the left. One hand for you, one for the boat!The shift materialised pretty much bang on time so we started heading back inshore. As we came back in sight of Bushido we saw we had made up the five or six mile deficit and we now even slightly in the lead. We decided to stay on a more inshore course, tacking up the coast to keep a cover on them.

We got our big break in the middle of the second night. We had both run out of wind finally and we could see Bushido about four miles astern of us. The wind started to fill in a little bit from offshore so we reached away from the coast under code zero, while Bushido continued to head in and fell in a hole. The breeze we had came and went a few times but by dawn we had pulled out to about a 20-mile lead.Getting across the lower Hawke’s Bay and into Napier from Cape Kidnappers is always a bit of a trick. It got pretty sticky but finally a land breeze filled in enough for us to enjoy a nice code zero lay across to the finish line. We ended up finishing five and a half hours ahead of Bushido, with division three boat Marshall Law pulling off a blinder of a leg to finish third, only another 45 minutes further back. Interestingly, they had gone even further offshore than us — several times — and it had really paid off for them.

They deserved to win the leg on overall handicap.So now it’s a few days relaxing and recovering in Napier — including the infamous competitors’ wine trail —before heading for Auckland. Forecast is for more upwind work, which will suit us quite well. We are leading on overall time and one point off overall PHRF, a very similar position as we were in on Karma Police at this stage in the 2010 race. It’s still a long way back to Auckland though, with the notorious East Cape and the Bay of Plenty (of Holes!) yet to negotiate.
ScotFebruary 19, 2014
Leave a reply