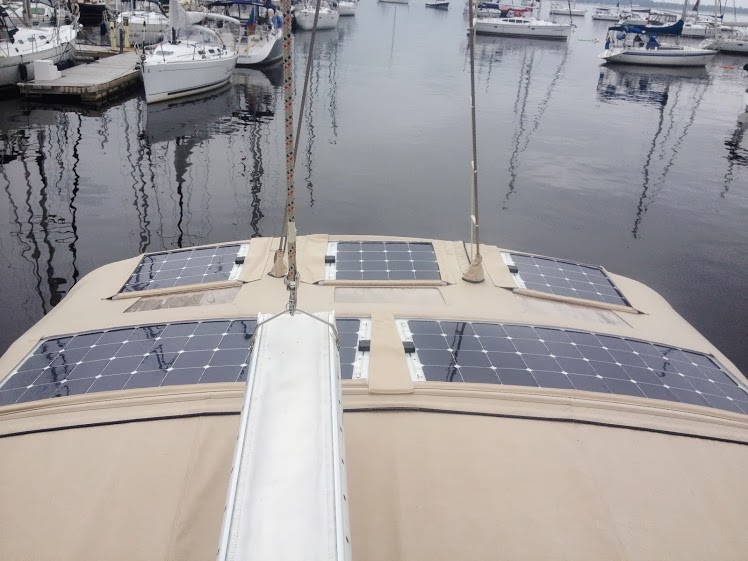 Time to raise my tired gaze from the never-ending battle with Quickbooks, and update our SA friends on what is happening here at OceanPlanet Energy (aka Bruce Schwab Energy Systems).  The past year has been a blur, as our bite into the niche market of marine energy storage and charging systems seems to have hit a major artery.  I know that we should never complain about being busy, and it is all great fun and interesting stuff to work on.  However there is always a mild nagging fear that in the flurry we’ll forget about sending someone’s Solbian solar panels and/or Genasun GLi batteries and/or something else to their boat or boatyard somewhere. Not that we have forgotten yet (knock on wood)…but I do tend to worry.

Thankfully (you may have noticed the “we” above), our new assistant Julia Carleton has been a huge help as the biz grows.  A real live EE (Electrical Engineer, vs. just another old sailor like yours truly), licensed captain, and long-time Outward Bound sailing instructor, Julia will be helping here out much of the time.  That is, with occasional breaks for Antarctic scientific expeditions as a supporting skipper.  As a former RTW solo ocean racer, I am hardly one to criticize such extracurricular adventures.

So anyway…I’m finally back in Maine after an ill-fated trip to the NW for the Seattle boat show.  Wound up catching a nasty cold/flu bug, and after a brief outing to the Lake Union in the water show (stopped by the Genasun GLi equipped Coastal Craft 450 IPS), I was fading fast and retreated to my mom’s pad in West Seattle.  The next several days were spent in bed and I never even made it to the indoor show!  Oof.  Whatever bug I had eventually mutated into a sinus infection and I was unable to fly home as scheduled.  On the plus side, being at your mom’s is the best place to recover when you get sick…;-)

Eventually some prescribed antibiotics seemed to be do the trick, an so almost a week after the schedule return (and springing for an expensive ticket), am back to where the snow rarely melts until April (Maine).  I should be healthy enough soon to get back out XC skiing, which is what living in Maine is largely all about. Well that and Cyclocross racing. May also be trying out a friend’s ice boat if conditions allow.

In the meantime, we’re upgrading our SA banner ad with added emphasis on Solbian and Genasun.  All those years ago in the OceanPlanet RTW adventures, the community here on SA was a big support of the Dream; and I’ll never forget that.  So it’s nice to return the favor and support SA whenever possible.  At some point I will crank out some bits on energy management at sea, GLi energy storage (vs. Pb), options for lightweight solar power, hydrogenerators, energy system monitoring….etc.  So much to talk about, but let me get healthy first.