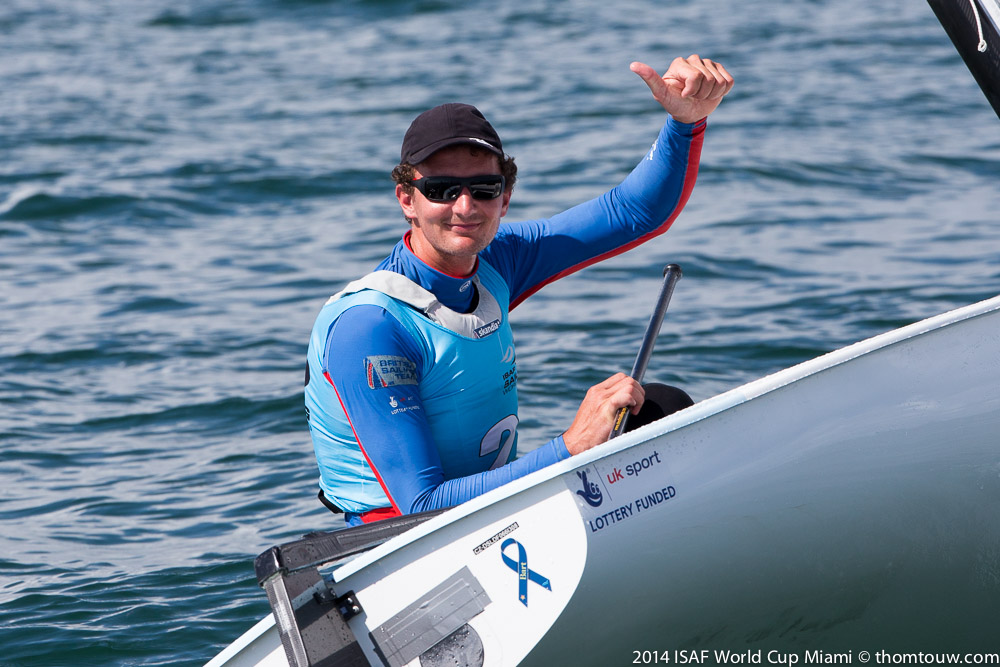 On the generally calm waters of Biscayne Bay last week, one of Team GBR’s brightest hopes, Giles Scott, took the Finn class gold medal at the ISAF Sailing World Cup Miami in a last gasp push on the final lap of the medal race. Australia’s Oliver Tweddell had dominated the light wind week, counting no worse than a second place going into Saturday’s medal race.

But even that was not enough for the mathematical upsets that are so often a feature of the medal race. On a race by race score, Tweddell had overcome the 2011 World Champion in five out of the six races sailed. However, medal races were created to provide a gripping finale and that is what transpired. The race itself was dominated and won by the returning 2010 Finn Junior World Champion, Luke Lawrence, from the USA, but the real interest was in what was happening behind him. Tweddell had taken a nine point lead into the double scoring medal race and just needed a consistent race to pick up his fist ever World Cup gold medal. After a nervous first upwind he was in trouble with four boats between him and Scott, but after the downwind he had closed to within two boats of Scott and it looked like it was job done.

But with the wind at just 3-4 knots and quite patchy, the final upwind was decisive. Scott banged the left corner, which Lawrence had so confidently controlled on the first upwind, and slid into third place. Tweddell, looking for something that wasn’t there, was further to the right and paid the cost, dropping to eighth. Scott further sealed the gold by slowing his opponent in a match racing move. Scott said, “I managed to dial him down on the port layline when I was coming downwind.” Scott then moved into second on the final downwind to put six boats between them and take the gold by three points. Tweddell said, “The medal race was extremely tough. There was more pressure on the left and I really struggled with my upwind speed. Even though I’m extremely disappointed with losing the gold, I’m still stoked with how I sailed all week.”

Medal races are meant to be tough, but Tweddell’s score for one race was exactly double his accrued score from the previous five days. With two days lost earlier in the week through lack of wind, and only six races completed, the medal race became even more pivotal in deciding the medals. A sixth place in the medal race was enough for the current world champion, Jorge Zarif to hold onto the bronze medal. It wasn’t exactly a convincing performance, but got the job done for the Brazilian. However Lawrence’s race win was convincing and his performance this week will surely be noticed by the US selectors as the race for Rio hots up. With 37 entries the Finn fleet was one of its largest on record at the Miami OCR and that bodes well for an exciting season ahead, culminating with the first country selections for Rio2016 at the ISAF Worlds in Santander.

For now, it’s just eight weeks until the next leg of the Sailing World Cup in Palma, Mallorca and the new young stars are starting to rise. It’s interesting to note that out of the top six boats in Miami, three have been Finn Junior World Champions within the last six years, while three more in the top 15 have picked up a medal. It seems there can be no better start in the Finn class. – Robert Deaves.