SA’er “point” checks in with a look at the upcoming Extreme Sailing Series; perhaps the healthiest series of any in the sport today, with multiple teams on the waiting list if any of the ten teams pull out.  With 8 stops including a new one in Sydney (but interestingly not a single one in the New World), the series is poised to continue to gain viewers and sponsors while keeping costs down; hopefully there’s enough coming in to help fund the move next year to a less antiquated boat.  Hit the thread if you think you know if anyone can topple King Leigh. Paul Wyeth photo… 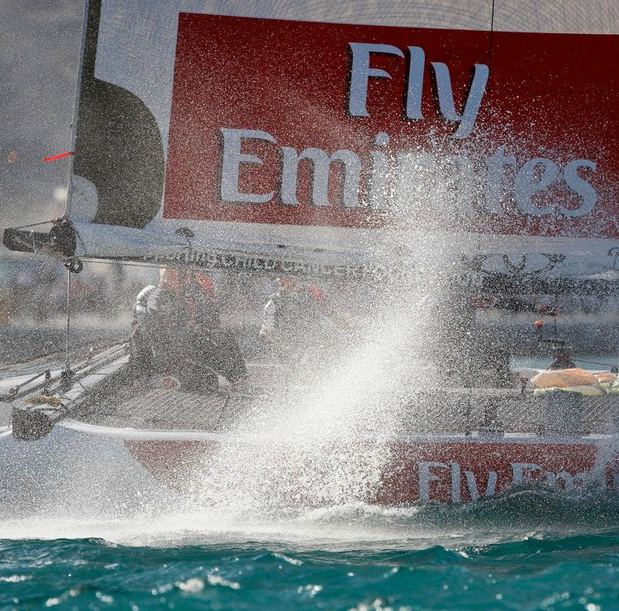 Whilst the backroom negotiations between Challenger and Defender continue in the Americas Cup (AC), the established players and wannabe teams for AC35 have predictably spilled back into the Extreme Sailing Series (ESS) for 2014. For those that were following along back in 2010-11 a similar set of circumstances saw aspiring AC teams gave the ESS a shot in the arm, now with the momentum of AC34 behind new format racing in multihulls this could be a cracking season of racing across eight venues:

Teams confirmed as competing in the series so far include:

• The Wave Muscat – 2012 and 2013 Series Champions – return seeking a hat trick with Leigh McMillan on the tiller – team profile
• Alinghi – 2013 runners up – will be back with Ernesto Bertarelli at the helm and backed by the same quality team as 2013, including American Morgan Larson on tactics – team website
• Red Bull Sailing Team – 3rd in 2013 series – are bringing the energy drinks marketing muscle back for another year… the AC connections also run deep with this team being heavily involved in the Youth Americas Cup program in 2013 – team website
• SAP Extreme Sailing Team – 4th in 2013, and returning for their 3rd consecutive year on the ESS circuit – team website
• Realteam – officially finishing mid-fleet for the series in 2013, in reality it got pretty patchy passed this point, will they be competitive in 2014 or just making up the numbers? Hopefull they take their serious D35 skills and sail as well as their web designers build team websites – team website
• GAC Pindar – Could this be the genesis of an Australian teams return to top level competition? With young Seve Jarvin on the stick, Ed Smyth on trim, Sam Newton on bow and Troy Tindall pulling the strings (in more ways that one it seems). Ian Williams will also be on hand to point them in the right direction. – vsail press – GAC Pindar website
• Oman Air return with Rob Greenhalgh in charge and backed up by Will Howden, Tom Reynolds and two Omani sailors – Hashim Al Rashdi and Musab al Hadi  – press release
• ETNZ – having taken their medicine it’s a mix of the old guard and new blood at ETNZ with Dean Barker rotating duties with new reruit Peter Burling, will a phoenix rise from the ashes of AC34? –ETNZ blog
• J.P.Morgan BAR – according to the British sporting press Jesus himself has arrived and is sailing in the ESS. Until we see Big Ben actually walk on water it’ll be interesting to see how he fairs out from under Uncle Larry’s wing and in the lead up to launching his own AC assault – Team Blog – Press
• Groupama Team France – If anyone is going to rain on the other teams well planned parades it’s Cammas. In a tight class like this he’ll have a target on his back all season… but something tells me he’ll come out swinging –  Groupama Team Blog

It’ll be interesting to see who else jumps on the ESS bandwagon during the course of the year, with the AC35 protocol announcement due in the coming months its fair to imagine this will become the proxy forum for challengers looking to sharpen their skills, get each others measure, and start lining up their resources and alliances.

Personally I’m excited to see the series hit Sydney Harbour… it seems the Rolex Sydney Hobart won’t be the only big show in town come December 2014.

So let the Anarchy begin!