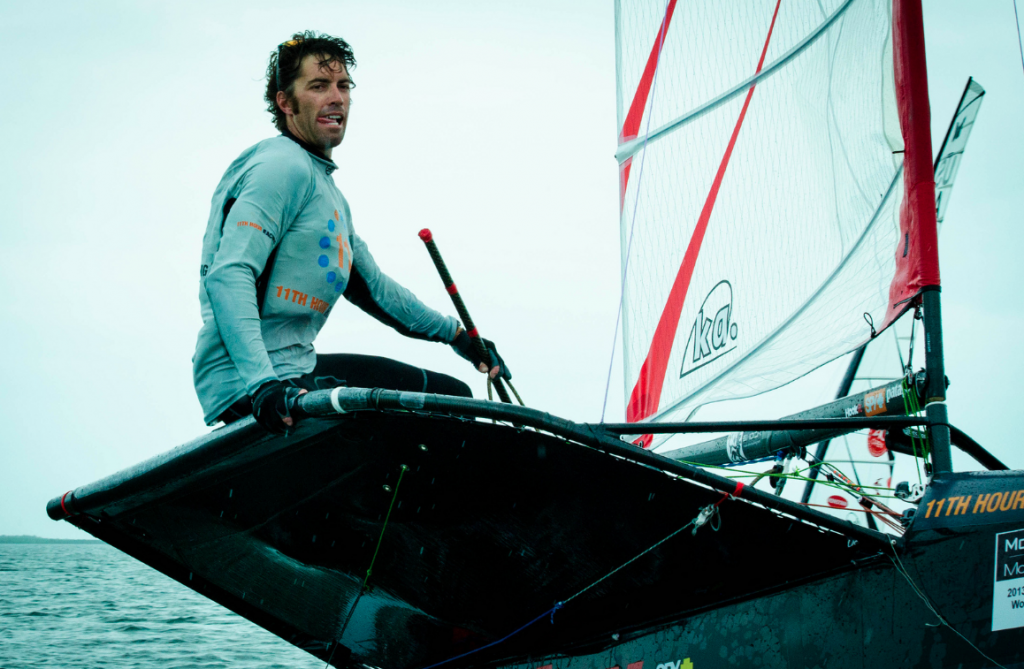 Anthony Kotoun continued to chip away at the faster Bora Gulari in their continued duel in the US Moth fleet this weekend, with the Newport pro beating Detroit’s finest in the first Moth Winter event of the year.  The pair makes up the winner list of almost every major US event over the past couple of years, and born just a few days apart (and not particularly recently), it was Bora who brought Anthony into the fleet back in 2010.   With Bora taking his second World Title last October in Kaneohe Bay, he got the right to fly the coveted “USA 1” sail number for the year while Kotoun barely broke into the top 30, but last weekend it was Anthony’s turn to strike back in the 16-boat fleet at the Upper Keys Sailing Club in Key Largo.

Located about an hour south of Miami and a bit of a secret spot for those outside the SE catamaran racing circuit, the venue is perfect for fast little boats: Clear, warm,

and board-flat water coming over the Keys, a small club with members dedicated to sailing, and a broad range of talent across the fleet to make sure everyone had someone to race against.  It was a common sight throughout the weekend to see class veterans helping the newer Moth sailors get rigged and tuned up, sharing gear and tips and of course, trash talk.    The fun continued off the water where the sailors shared a huge house down the road; just another way the Mothies keep costs down and the fun factor up, allowing a solid travel schedule and strong fleets despite few of ’em having three nickels to rub together.

Day 1 was the slalom, and Anthony came out of the gate hot, winning each of the qualifying races before snagging the winner-takes-all final over Charleston’s Pat Wilson.  The trend continued on Saturday after a string of equipment problems for Gulari; he broke an inner wing bar just before the start of the first race, broke an outer wing bar before the last, and after sailing slower than a fleet that he usually dominates, learned at the end of the day that his main foil hinge had been partially wrecked for much of the day.  Light winds on the last day meant no racing, denying Bora any comeback hopes and giving Kotoun five points in six races, a horizon job in this fleet.  2008 World Champ and expat Aussie (now Chicagoan) John Harris took second, with George “Bear” Peet taking third.  “It’s a good thing this was two sailing days after Worlds and not during”, Harris told Gulari at the end of the day…Full results are here.

Both spectators and sailors are welcomed to join the fun at the UKSC next month for the second event in the 11th Hour Racing Moth Winter Series; check the Class Facebook Page for for reports, videos, photos, tuning tips, and a few stream of consciousness ramblings from Mothies who tried to have a long conversation with the remote control at the bar.

Canine pic from Tracy McLaughlin and top shot of Johnny Nugs (looking like the stud he is) from Ben Winkler Photography with a full gallery here.  Thanks to Matt Knowles and the US Mothies for contributing to this report.

their cup does not runneth over