Plastic Oceans – Jet got a bit wet in the line of duty. 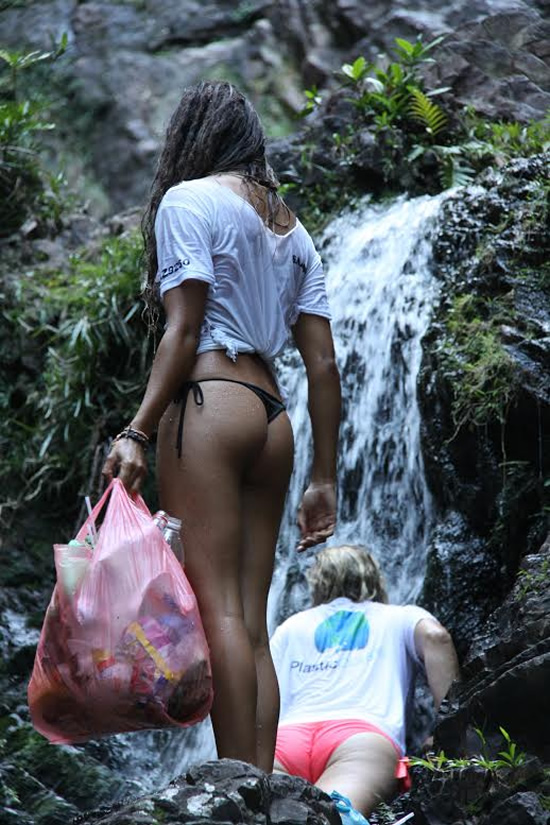 After racing in the Kings Cup some of Sababa-Plastic Oceans delivery crew visited a waterfall in on Langkawi Island Malaysia. The crew were very sad to see this beautiful place was full of trash and plastic waste and decided to do a clean up.

In the last Volvo Ocean race Ken Reed said he could not get over the amount of shit in the water in the Malacca Straits I thought he was joking. But unfortunately it’s all true as we sailed up from NZ it started at East Timor and got worse as you moved North. We are on our second water pump from shit getting sucked up the intake.
We decided to support and promote Plastic Oceans Charity in the Phuket Kings Cup and Langkawi Royal Regattas and branded the boat and had tree shirts printed. We did this to raise awareness of this growing man-made global catastrophe.

The word is getting out about plastic pollution here in Langkawi, and it is a stunning part of the world. Local business do regular beach clean ups, and this happens even daily on the main beach. But still you see litter just dropped every where even right next to a bin.

When are people going to get it, most of the plastic that ends up in the water is swept down stream from their local waterways and back yard into the ocean. It has to start with education so with that in mind Plastic Oceans decided to make a HD documentary and it will be used in social media and to educate people about the environmental and health issues associated with plastic pollution in the Ocean.  Please go to their website for more information or to donate to their cause.

Title inspiration thanks to Faith No More.

anarchy in the front A breezy weekend in San Francisco nets a shot of foredeck anarchy from this weekends St. Francis YC J/Fest regatta,