a place in the sun 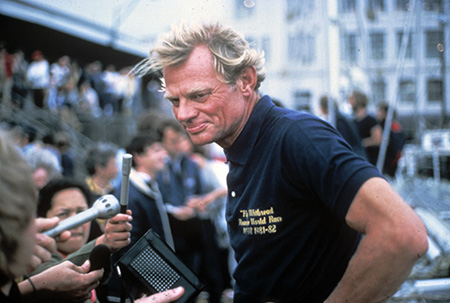 Many young offshore sailors will not know the name Connie Van Rietschoten and you can’t blame them. Connie was from a different era, but the impact that he had on offshore racing greatly shaped the way many top ocean racers now view an around-the-world yacht race.

Connie was the only skipper to have won two Whitbread Round the World Races (now Volvo Ocean Race). He did so, back to back, in 1977/78 and again in 1981/82, on boats he named Flyer. This larger than life, true gentleman died yesterday of a stroke at the age of 87.

Before Connie the Whitbread was largely a race for adventurers, misfits and those running from trouble. Sure there were some good sailors competing but they were few and while they pushed hard it was not easy to race a Swan loaded down with a teak interior and cases of wine and beer. Connie commissioned Sparkman and Stephens to design him a state-of-the-art 65-footer for his first race, one of the very few custom designed boats to compete in the event. He had Royal Huisman Shipyard in Holland build the boat and with a crack crew dominated the ‘77/78 race.

There is an iconic image of Flyer roaring down the Solent toward the finish line in a strengthening gale with full main, full mizzen, a Yankee poled out to windward, and just for the heck of it a blooper (remember those) set to leeward. The Flying Dutchman, as he was affectionately known, was piling it on even though he had already won the race. The iconic image is of the boat broaching wildly and the blooper shredding to bits.

Four years later Van Rietschoten returned with a new, larger Frers design Flyer. Where he changed ocean racing was in his preparedness and attention to detail. He brought a true racing attitude to an event that many viewed simply as an extended cruise, albeit a difficult one. The crew on Flyer were young and adventurous ready to push hard, striving for victory. Among them was a very young Grant Dalton, currently the Manager of Team New Zealand. On the Volvo Ocean Race website Dalton shared his thoughts. “Nearly all of us can track our careers to Conny. We were all young, restless, most of us totally unproven and yet Conny took a chance on us. He allowed us to be ourselves, sometimes guiding us, sometimes coming down hard on us. He taught us how it was going to be done in the future and he introduced a professional business approach to offshore sailing. He was indeed a pioneer.”

Van Rietschoten and Flyer II won again in 81/82 but this time he had some true competition in the form of Peter Blake and a top Kiwi crew on Ceramco New Zealand. Deep in the Southern Ocean in a neck-and-neck race with Ceramco, Connie suffered a heart attack. The boat doctor wanted to contact a cardiologist racing on board Ceramco for advice, but Connie would hear nothing of it. “If Blake and his crew had known I had a health problem, they would have pushed their boat even harder,” Connie famously said afterwards. “The first time they were to know about my health was when they saw me floating by in a body bag.” He was a fierce competitor who pushed hard when the time was right and backed off when it wasn’t. He also had two simple rule on his boats; no one was to talk about religion or politics and everyone, himself included, was to use the toilet seat bolted to the transom no matter the conditions.

The level of professionalism that Van Rietschoten brought to the Whitbread forever changed the race. Despite being 27,000 miles long Connie treated it like it was short sprint and encouraged his crew to push hard each and every day. Those young sailors who sleep on the windward rail and move sails from side to side at each tack owe it all to Connie, a true Flying Dutchman. May he enjoy his long off watch in a warm, dry place.

Photo thanks to PPL – more here.

they are the jackals