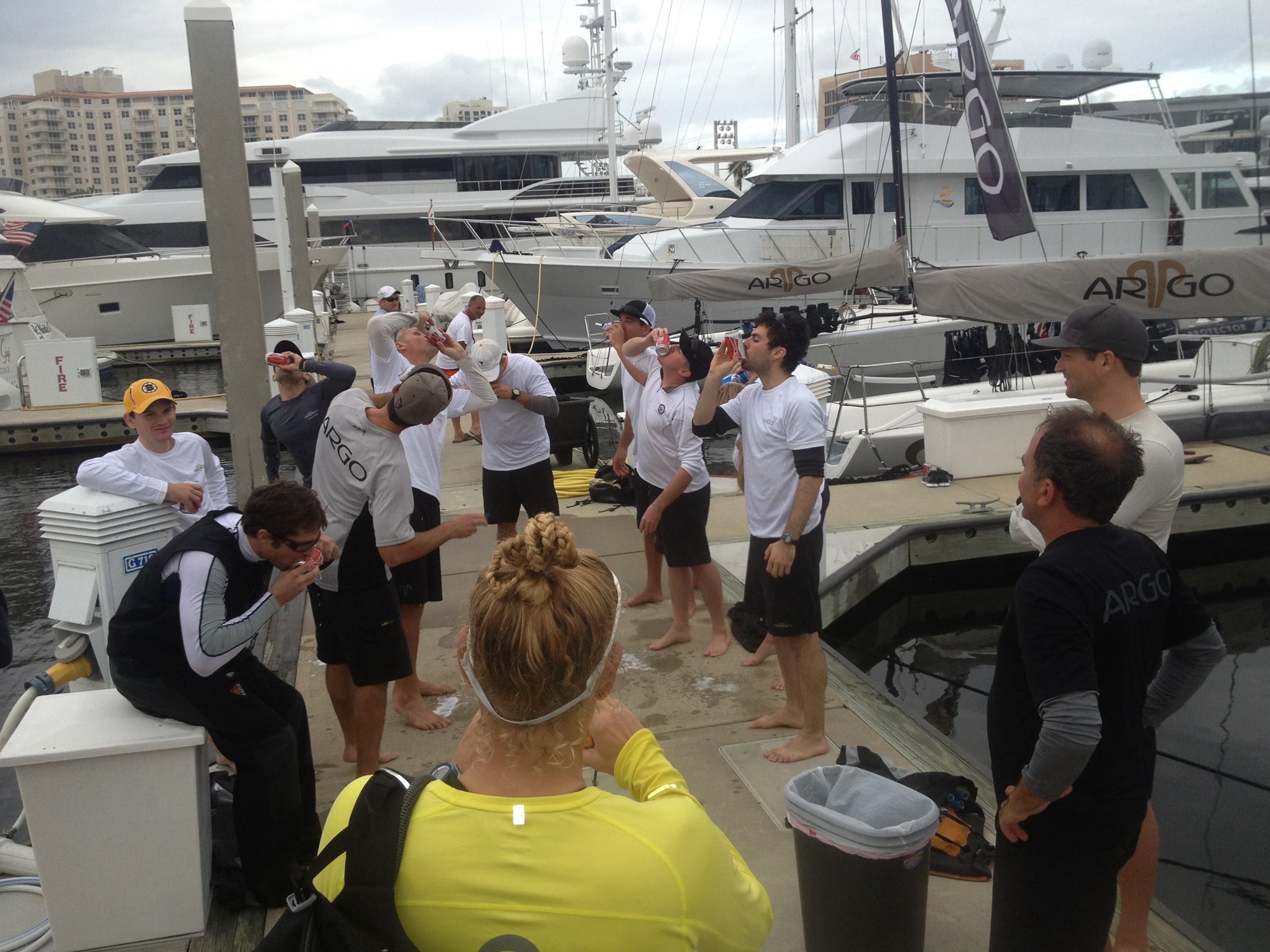 Melges 32 World Champ and videographer extraordinaire Petey Crawford checks in with this report from Fort Lauderdale and the entry-challenged US Melges 32 fleet.  It’s good to see that there’s still some humor and fun in a class that’s been decimated by escalating costs and poor class management.

Fort Lauderdale’s Melges 32 Gold Cup was the annual regatta that really launched the M32 Class.  Run for years out of a parking lot at the Bahia Mar with a decidedly relaxed and amateur attitude  and sailed in classic South Florida wave and trade winds, it was widely regarded as one of the annual calendar’s most reliably good events.  And this year, it was cancelled for lack of interest.  Add that to the cancelled National Championship in Harbor Springs, and you have to scratch your head; what is going on with one of the world’s few remaining Grand Prix fleets?  Was the NorthAm fleet just taking the year off after a pricy, tough 2012 Newport Worlds?  Or is something else going on?

Whatever the reason, I have a ‘hard time’ understanding why we weren’t racing in classic Fort Lauderdale conditions.  Wait…I was actually racing in those conditions, but only because  2013 M32 World Champ Jason Carroll had earlier decided that, no matter what the class was doing, Team ARGO would be there to represent.

So, despite the Gold Cup cancellation, The 2013 Team ARGO “Dust Bowl” went off with A-Argo, B-Argo (pronounced BAR-GO), and the boys and girls of the Devos family’s Delta.  We had our usual crew with the sole addition of Charlie Ogletree, who replaced a busy Cam Appleton (busy winning his 3rd straight RC-44 season championship).  The Bargo was another story, a motley bunch of past Argonauts: Chad Corning, Danny Pletsch, Julie Howe, Brian Fox, Clay Bischoff, John Baxter, and Patrick Mauro. With additional help from Sam “Rasheed” Rogers, and Charlie Smythe, this bunch came to play with a big attitude and a chip on their shoulders.  DELTA was its normal top notch crew, but with guest skipper and rock star amateur Brian Hill gladly stepping onto this top-notch program to drive the bus.  Rounding out the group was Anderson Reggio as PRO, Matt Knowles as the Match Racing Umpire, and El Grande, Dave and Buzz who served as the OTW support crew.

As would befit such an informal bunch, the format was simple: 2 days of racing, mixed up between match racing round robins and fleet racing, and all I have to say about the first day is ‘dust bowl indeed’.  Even the 10 AM dock out was a bit aggressive considering our combined ‘dustiness’, and much of the crew of both ARGO boats were, let’s say, wounded.  As we entered the box for the first match against BAR-GO, it became clear that Jason hadn’t match raced much.  Charlie looked at Jase and said “perhaps we should have had this chat yesterday, or at least on the sail out.”  A wave of laughter went across the deck as we picked up our first penalty for an early entry.  BAR-GO didn’t need any more than that to smoke us in the first race, getting a big enough lead to add a drinking penalty to ARGO’s score by completing their own spin before the finish.  Ouch.  BARGO clearly came to play,  and they easily beat Delta to sit on 2-0.  We knocked Delta down and got our first point, but next up was a two-lap fleet race — something we’re quite good at — and we won that one.  Back to match racing, though things got sort of fuzzy, memory-wise, and I do vaguely remember getting better as the day wore on, dropping two drinking penalties on BAR-GO compared to the one we copped, and we led the day, followed by the B’s and then the D’s.  Penalties were exonerated on the dock promptly upon landing, and they didn’t cancel out.  We won that battle, too. 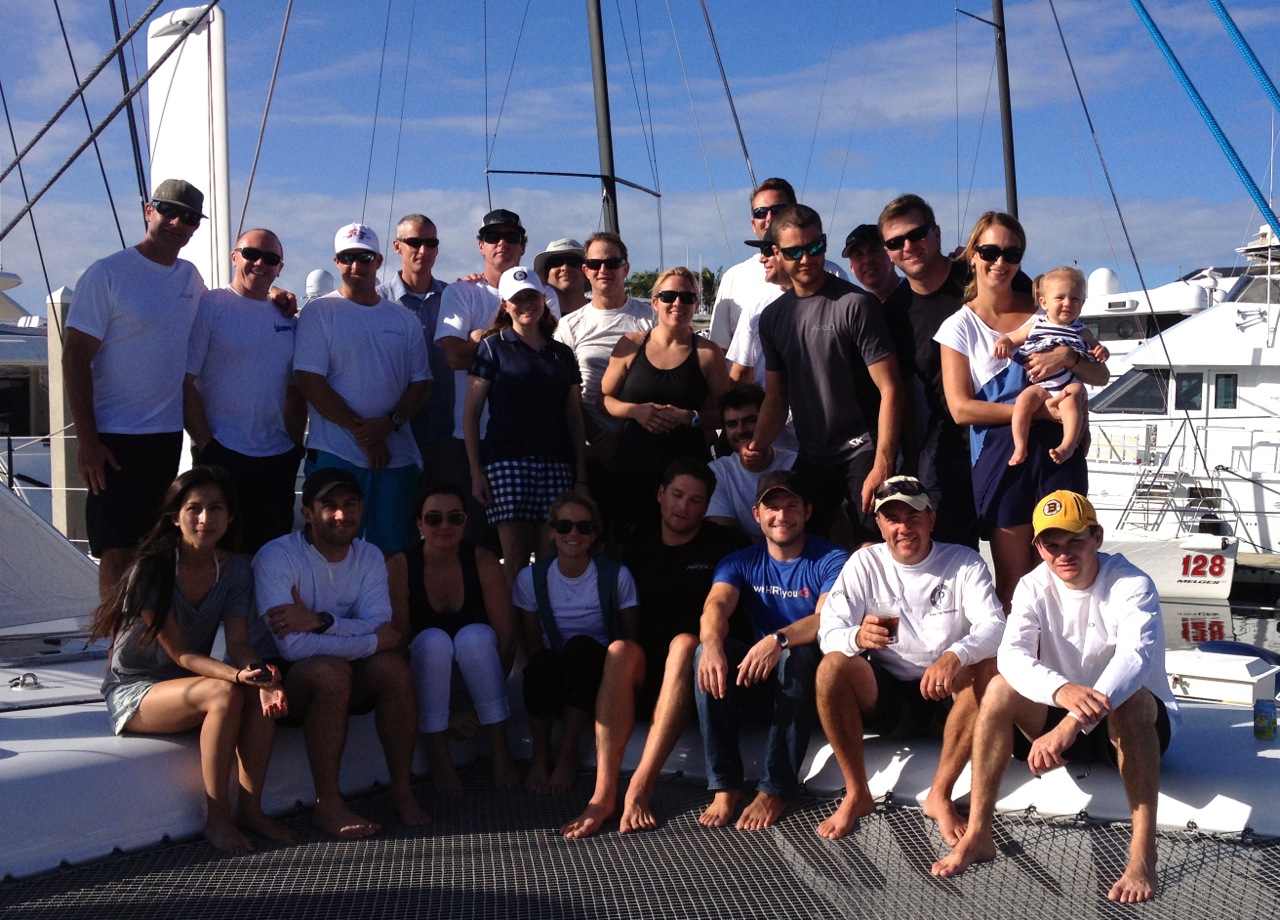 A massive group dinner that night at Steak 954 got the ball rolling pretty good; Sam and the restaurant staff even granted me a fake birthday. Sorry to all of you that thought it was actually my birthday, but blame Sam, not me.

Day 2 dawned and somehow I think most everyone felt better than on day 1, we actually felt dusty as opposed to downright filthy. Same set up; match racing followed by fleet racing, after it was all said and done, it was a 3-way tie going into the final race, a fleet race to crown the first ever King of the Dust Bowl. Clearly Delta cheated by feeling better than we all did and easily schooled us to take the win, and the chip carrying BAR-GO got the best of us and took second, but hey we still got a podium spot! All jokes aside, Delta sailed great on the final day and deserved the Crown.

All in all, while it was a shame that nobody else came to play, we had an amazing, competitive, and very enjoyable weekend of racing in classic Lauderdale conditions: big waves, and big breeze.  We all really hope things are headed in the right direction for the M32 Class, with some changes coming down the pike including a scheduled 2014 Winter Circuit, Miami getting some traction, and summer in Newport.  It’s one of the most exciting production raceboats ever built, and we’re looking to show the world that the Melges 32 is still at the very top of the heap when it comes to great one-design action.