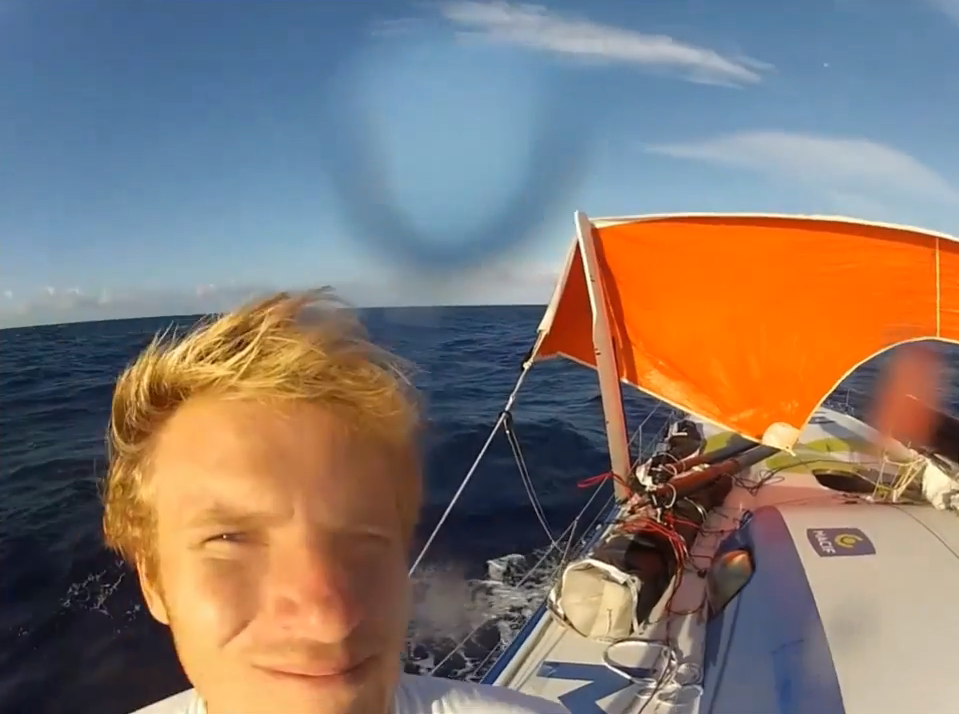 A couple of days ago in the doldrums, Open 60 PRB – probably the lightest Open 60 ever built, caught up to Gabart and Desjoyeux aboard Macif, who’d been leading almost from the gun.  Young Francois and the grizzled veteran Michel showed what they and their latest gen VPLP/Verdier boat could do that night, putting almost 20 NM on the orange boat by morning.  But maybe they are a bit too fast.

Macif continued to stretch her lead until yesterday when her rig went over the side, not all that far from where the same pair last lost the rig off the nearly identical boat during the Barcelona World Race (though that was Foncia, sistership to Macif).  The duo cut the mast away and are proceeding under jury rig to Salvador de Bahia, and they are still fast, sailing almost six knots with no mast at all.  Check the short jury rig video here, and track PRB, Maitre Coq, and Safran as they fight for the win with just one day left on the course.  More from Gabart:

“We were sailing on port tack under full main and big gennaker in 15-20 knots with a small seaway coming from behind.  An hour or two before we’d had some gusty wind but the wind was stable when the mast broke.  We were under autopilot with myself in the cockpit and Michel resting inside when the mast went, breaking a dozen meters above the deck, meaning 18 meters of mast in the water.  The standing part was supported by the cabin top/coachroof.

We turned downwind, fortunately all safe when it happened.  It took about an hour to separate the upper part from the lower part, making sure we could preserve the boom for a jury rig.  We’re both in the same state of mind: Sad and disappointed, but we are forward looking people and at these times it’s better to do that than to dwell on problems.

Within two seconds of the first noise, the mast was down, so it’s hard to speculate on what might have happened…I suspect it was a tube failure rather than fittings or attachments.  We were definitely pushing the boat but in a very usual way and in normal conditions; certainly not the first time I’ve pushed this boat since her launch!

After the Vendée Globe, we stepped a lighter mast that would hopefully not sacrifice reliability, but it was maybe a bit more fragile in the harsh conditions of this TJV.  I don’t want to second guess much, because maybe the Vendee Globe mast might have been fine, but maybe it would have broken too.

I don’t think our match race with PRB had any impact on how we pushed the boat.  We took a step back at times, our goal was to sail better consistently. We did not want to overdo it, we wanted to sail cleanly and even if PRB had been a few miles ahead, or behind, then nothing would have changed.”

“I have had two dismastings in my life, both in IMOCAs between Brazil and Africa and both sailing two up with with Michel . We think of the dismasting which happened two years ago in the Barcelona World Race. But the reasons are different. But there is the same feeling of sadness because all of a sudden everything just stops. At the same time we look to the positives, it could have happened at any other time and that would have been worse for us and for the boat. It’s been great since it happened in the Barcelona . There is no reason why we can’t follow on the same after this second dismasting.”