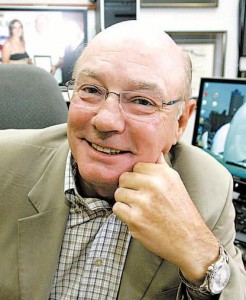 Well-regarded Canadian yacht owner Dick Oland (Southern Cross 52 Vela Veloce) was murdered more than two and a half years ago, allegedly bludgeoned to death with an axe handle while sitting at the desk of his New Brunswick office.  This sort of thing isn’t really a regular occurrence in the Canadian Maritimes, so the lack of suspects or arrests for some 28 months was surprising to everyone, though with last week’s arrest of Dennis Oland on the charge of second-degree murder, things are becoming perhaps a bit more clear.

Police say Dennis Oland and his father had a sometimes combative relationship, and that Dick’s son found himself in financial straits in 2011, owing his father more than half a million dollars.  Police also found a blood-spattered jacket in Dennis Oland’s home with DNA belonging to Dick, and evidence that Dennis had lied to investigators about wearing a different jacket on the day of the murder.

As damning as this evidence may be, Oland’s family hasn’t made it easy; the St. John police seem to have spent a lot of time trying to keep the investigation secret, and six months passed between the DNA evidence and this arrest.  And now, the family says the police are just flat-out wrong. “We wish that the police would turn their attention to finding out who is really responsible for Dick’s [Richard Oland’s] death,” a statement from them reads. “We know that Dennis is innocent. We are devastated that this nightmare for Dennis and for all of us is going to continue.”

It’s certainly a nightmare, but will justice ever come for the killer of this passionate Canadian sailor?  It’s hard to be optimistic, but you can talk about it in the thread.