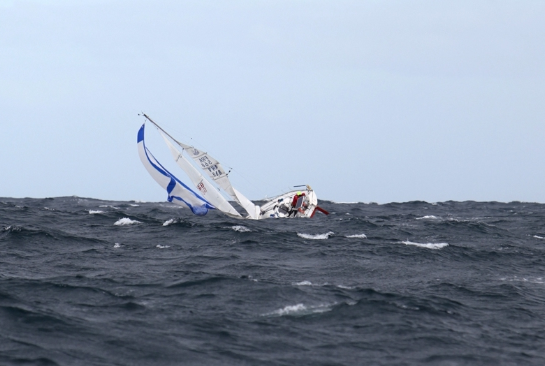 The latest from the MiniTransat…

As expected, the Portuguese trade winds continue to push hard. The wind consistently exceeds thirty knots as one moves away from the coast and the combination of a cross breeze over a residual northwesterly swell gives the senstion of being in a pinball machine. Several competitors have had bitter experiences and for some, the punishment has resulted in retirement, either becuase the vessel has suffered too much damage, or simply because, there comes a point when enough is enough and you simply want it to stop. This Mini Transat, with its long days of waiting, has helped to blunt craving for adventure amongst some shrinking violets. The test has not spare anyone from prolonged waiting, crossing the Gulf of Biscay was brutal, then a pit stop in Spain and for the vast majority of the fleet there was a difficult delivery passage along the Asturian coast . Finally, they have been accompanied on their passage down the Portuguese coats by a particularly vicious north easterly system. One thing is certain: the winner of the 2013 edition wont just be a good sailor, they will by necessarity be a truly accomplished seaman.

Breakages and lessons
The Portuguese trade winds have already pulled the rug from under a number of competitors, include two podium contenders in both the series boats and the protos. Ian Lipinski (Pas de Futur sans Numérique) paid the price for coming off a big wave. Bad luck struck when Ian, just out of a nap, was about to go on deck, he was caught by a wave that filled the interior of the Pogo in no time. At the same time, the boat turned turtle sitting with its keel in the air for a long time before coming upright dismasted. Ian was collected by a cargo ship that was en route to Sfax in Tunisia. Later that night, it was Gwénolé Gahinet (Watever / Logways) requesting assistance from the race organisation, when one of his keel bearings broke. The navigator, who could have lost his keel at any time, was finally able to board a Portuguese fishing boat. Other soloists who have thrown in the towel are: Joel Garcia Miro (Argo 650) who will not leave Camarillas where he had taken refuge. Yann Le Pautremat and Sébastien Picault have confirmed their retirement, alongside Bert Bossyns (Netwerk) who took refuge in the port of Peniche. Finally, Gilles Avril (Evolution Marine) hit a log in a surf. The bow of the boat did not survive the crash. He is now safe aboard one of the support boats.

Meanwhile, Giancarlo Pedote, Benoît Marie (benoitmarie.com), Nicolas Boidevezi (Nature Addicts) and Bertrand Delesne (TeamWork) are leading the dance masterfully, which speaks to their extensive offshore experience. Other competitors have chosen to temper their approach, for example Stan Maslard (Sefico Group) has clearly opted to stay closer to the Portuguese coast to to take advantage of the calmer sea and a less strong wind. Renaud Mary (www.runo.fr) is taking the same strategy. It’s a choice that may pay off, since Renaud is credited with the biggest gain over 24 hours from noon to noon. And the fight between Aymeric Belloir, Justine Mettraux (TeamWork) and Simon Koster (Go4It) remains spectacular ….

Pit stop
For still others, the race has been put on hold for the duration of a technical stop. In Porto, Clement Bouyssou (No War) and François Guiffant (Scidiam) are due to leave tomorrow morning. This is also the case for Pip Hare (The Potting Shade), François Lamy (Guadeloupe Espace Océan) and Diane Reid (One’s Girl Ocean Challenge) who have all called in near Lisbon. Others, like Carlos Lizancos (Reyno de Navarra) or Pilar Pasanau (Peter Punk) have not yet confirmed their intention to continue the race. They will sleep on it …