Question Of The Week

Longtime Anarchist, occasional Anarchy I.T. Department head, and now Caribbean cruiser BJ Porter asks “Did I do it right?” after receiving a Mayday in the southern Caribbean over the weekend.  Got an answer?  It goes here.  Note:  The photo is NOT of the fisherman in the story; just something random and descriptive that we liked. 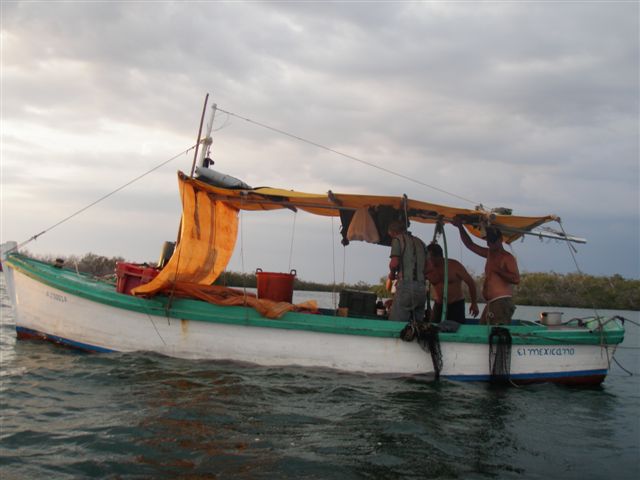 Not just some clown in a Bayliner calling the USCG on Narragansett Bay with smoke coming out of his engines, we got a for real Mayday the other day.

After trying to get a response back from the guy, I finally got a burst of frantic Spanish.  I tried slow English…more Spanish.  OK…by now someone has dug up our copy of “Spanish for Cruisers” and I am able to get a few phrases like “We speak very little Spanish” on the air.  Slow pigeon English from the other boat…”No fuel!  No water!  No Food!”.

As I was responding and trying to raise a response we saw a boat…distance was tough to tell, but it was disappearing and reappearing.  Eventually when I asked for their position they said “You just passed us” and I knew that was the boat.  So we pulled off the preventer, turned the boat around and beat back to them.  When we arrived we lowered the sails and motored around him in the rolls and chop.  The boat was roughly 20′ long, center console…sort of, there were tarps on it, with three fisherman on board.  Given the location (NE of Bonaire, nearby some of the remote Venezuelan islands) we figured they were Venezuelan.

It did enter in our minds that this COULD be a problem, there have been some incidents off the Venezuelan coast.  But given the relatively rough conditions boarding would be something only someone pretty desperate would try.  We fetched the machete we bought for opening coconuts up and left it in the cockpit…

Conversation came to it that we couldn’t easily get him fuel, as we only had six gallons of gas on board in our dinghy and no good way to get any of it to him, if we could even pour or siphon some out without spilling it.  Given that they had what looked large twin outboards, the two gallons or so we might be able to get to them wouldn’t get them all that far even if we could figure a way to pour it, store it, and get it to them uncontaminated.  It was rough enough that there was no way the vessels were coming together intentionally, someone was going to get damaged if we got within six to eight feet of them.

So they asked us to “Give us food, give us water.”  Their vessel was sound and not sinking and clearly just out of fuel and they did not ask to abandon it or get rescued.

So we scrounged up some fresh water and what food we could find that was in cans with pull tabs (there was no way we were going to be able to have a coherent discussion about can openers!) or in packages that might survive a dunking and put it in a water proof container.  We tied this whole mess to an orange PFD and an inflated white trash bag (for visibility and more floatation).  When then dropped it in the water upwind of them, at which point we very quickly figured out that their boat was drifting a hell of a lot faster than a little package of food and water…oops.  So we circled around a few times and fished it out then tried again from down wind which worked much better since they drifted down on it quickly.  They recovered it on the first try and thanked us on the VHF.

At this point we felt there was little we could do beyond relay their position to someone else who might be able to get them.  They didn’t want off their boat, and no one else had heard their call in the area.  If we stayed all we could do was circle them and try to call someone with our higher VHF or SSB.  So we talked to them and they asked us to relay their position to someone, and we headed back to our regular course.

I wasn’t completely sure this was the right thing to do, but I couldn’t see what we would do hanging around them either, except stay on station in case their boat started to sink (unlikely) and they needed to be pulled off.  But we could do nothing more to affect their rescue, except try to get in touch with authorities on their behalf which wasn’t working too well with VHF from this area.  Wind and currents were both pushing them West, towards Curacao and Aruba.

I spent the next hour and a half trying to get in touch with ANYONE in authority.  At one point I hailed “Coast Guard” on 16 and received a scratchy, inaudible but lengthy reply which made it clear the recipient could hear and understand me even if I could not hear them.  So I relayed all the information I could; our boa name, last position of the other boat, name of the captain (we could not get him to understand that we wanted his BOAT name, or it didn’t have one), number of people, their problems, our actions, etc.  I was trying VHF 16, and all of the SSB Emergency Hailing frequencies.

Nothing.  Not a whisper of a response.  I even went so far as to send Winlink e-mail messages to a bunch of people I knew, on the off chance that they might be awake still and able to at least forward the info to the USCG who would know how to contact the proper authorities in Venezuela/Bonaire/Curacao.  Alternatively I was contemplating breaking into some yammering hams and asking them to do the same for me, but we got a hail back before I needed to try that.

Eventually I got a scratchy hail.  Turns it out was from a freighter named Malmo about eight miles away from us; he could hear me but I could barely make him out but he’d heard my boat name and that we’d helped a boat in distress.  He was able to relay to Curacao authorities the position and situation, and speak with me to clear up the details.  And his course was going to take him right back through where we left the boat, so I think Curacao asked him to check in on them.  I don’t know where it went from there, as we were passing out of VHF range and could not follow the conversations after that.  The last thing we hear was that Malmo had “Made contact with a boat with Spanish guys they could not understand” which sounded a lot like our fisherman.

I am still second guessing myself on my actions.  Questions and thoughts for discussion…

1) Should I have stayed on station?  There was no immediate or even short term risk of life or injury to the fisherman, they were out of fuel in an area with reasonable shipping traffic and not insanely far from shore and now had some food and water.  Could I have accomplished anything at all by continuing to circle or drifting with him all night?  Eventually we would have raised Malmo as she came through, but I couldn’t know that at the time.

2) SSB/VHF  – OK, I’m going to look into Sat Phones now.  This was a real eye opener for me that they really can be quite useless as no one seems to answer the damned things.  Or no one can hear my SSB, though I talked to a guy in Moscow with it a few months ago.  Two minutes on a Sat phone and I could have reached the USCG or local authorities if I had a number to call.

3) On board procedures.  We are still more reliant on me than we should be – while at the helm I can’t operate the SSB, but I’m the only one that knows the detailed operations of it.  No one was comfortable taking the helm in close quarters with another boat in 25+ knots of breeze in 6-8’+ seas.  My wife went to sleep reading “The Guide to SSB for Idi-yachts” tonight; we’ve decided that EVERYONE needs to know how to operate it and we will be doing some training and practice.

4) The other discussion this brought up with was quick accessibility to food and water if we had to ditch – based on my wife’s experience trying to gather food and water in a pitching seaway.  Yes, there is a ditch bag with a PLB, VHF, GPS, Flares, food rations, some water, hand pumped watermaker, etc. etc. ready to go.  But if we have to ditch we’d also want to grab as much as we can that time and conditions permit.  And if you open a cabinet to grab some canned goods and everything comes piling out on you, or you need to dig three layers deep under the floorboards…this could be problematic.  We realized that we had two types of emergency water – the stuff deep in the boat in case the water maker pukes, and the regular drinking bottles in the fridge; 10L or so of water we can grab quickly and toss in the life raft.  And some discussions about what to grab…bags of salted snack peanuts for example should never end up in the life raft!

So, that’s the story with my concerns and misgivings and thoughts.  I’d love to hear what others would have done.

end of the storm

to the land of shakespeare