adminNovember 12, 2013
At 21:54:35 Europe Standard Time (20:54:35 GMT, 15:54:35 Eastern Standard Time) Team 11th Hour rejoined the Transat Jacques Vabre after making an unscheduled pit stop in Lorient, France to repair a failed strop on their forestay. Here’s the story from co-skipper Rob Windsor of a super fast pit stop and hospital visit – thanks to some folks on shore that y’all might have heard of before; check the thread here. 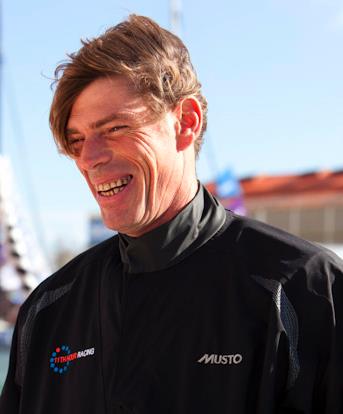 After our forestay detached from our rig, we spent the better part of 30 hours getting to Lorient to try and fix the problem. When we arrived in Lorient we found three people waiting for us on the dock: Ryan Breymeier, a good friend and fellow American short-handed sailor, Yann Le Bretton, prepareteur who we met in Charleston this year at the Atlantic Cup and Yann’s girlfriend who’s name I didn’t catch. As soon as we got to the dock they hopped on board. Ryan had a dock cart full of bits to sort out all of our trouble; a mast jack to jack up the rig so we could fix the forestay problem, vacuum bag material to fix our leaky rudder post, and a bunch of rigging bits to put it all together. On top of all of that they brought 2 large pizzas.

It’s pretty awesome to be in another country, in a harbor you have never been in, pull in with a broken boat (and broken Rob but we will get to that in a minute), see two faces you know smiling at you telling it will all be OK and pull off the dock just 4 hours later with it all fixed. Ryan asked if I was OK because Hannah mentioned that I had hurt myself. So, sometimes I over do it. People that know me will laugh at that because maybe it’s more than sometimes. Anyway, I think I pulled something too hard and both my forearms were swollen and really painful. Anytime I pulled or grabbed something I was in a lot of pain and of course sailing is all about pulling and grabbing so nedless to say, I was suffering. Ryan told me he had spoken to a doctor at the hospital and that I could go to the Emerrgency Room and walk right in. He said there would be no wait and that the doctor would sort me out. I ws thinking no way. I was just in a hospital in France 2 weeks ago getting stitches in my finger and it took 4 hours for 3 stitches. Yann’s giirlfriend took me to the hospital, we walked in and the doctor took me in in less than a minute! They took some blood and spoke a lot of French words I didn’t understnd and told me I pulled tthe tendons in my hands and forearms. They gave me some pills and cream and a splint for one arm and we were out the door in an hour.

When I got back to the boat, all the work was done. All the tools were being put away and they were tossing us our lines. As I write this, I am smiling from ear to ear. We have worked so hard to get here. We will never give up. As of now we are back on the race course, going down wind at about 14 knots! With the help of some friends and some good sailing from us, we will be right bck in this race very soon. Thanks to everyone for your support.”

songs of the south