Tasmania’s Richard Hewson was leading the fleet when the Mini-Transat was abandoned last week, and coincidentally, he spent a few days with our man (and woman) on the ground, Ryan and Nicola Breymaier when the start was first postponed.  The Breymaiers learned some interesting stuff about an interesting Ozzie; he skippered the winning Clipper RTW boat in the last race, is a licensed Merchant Mariner, and an all around good guy with his head firmly screwed on and a mature outlook.  Along with being good fun at the bar, of course.

With the Mini-Transat just announced as a single-leg event (from Sada to Guadaloupe) beginning next Thursday, this year’s race becomes the longest single leg ever sailed in a Mini race, and Ryan had a chat with Hewson to get his take on it, and the race itself, yesterday.  If you want more information on Rich’s series boat, go here.  And like him on Facebook here, please.

We were upwind out of Douarnenez, then reaching through Raz de Seine. It was rough but good, and a lot better than I expected. There were no big standing waves, and it was only blowing about 18 knots, gusting 22. The whole race average wind was only about 16, gusting 20 – 24. Warm surface air and cold frontal air were mixing and giving us very gusty conditions. I went through with a reef and the jib, Jeff put up his zero but I waited until leaving the Raz before I put it up.

When we got out of Raz de Seine and offshore there was a 2m swell and chop of 1m on top so big holes for a little boat. I was reaching with code 0 and two reefs; the rig loves it like that. Not rough enough to worry about the baby stay. I am impressed with how solid the rigs are. It was lots of reef in, reef out all that time, looking out for fronts/squalls and trying to reef in time. It only takes 2 mins to reef so that’s no problem.

Heading offshore and south towards Sada we were reaching for a while and then breeze turned more west.  Original plan was to head high, to try to keep gauge on the finish, but I was doing so well that I was in the lead pack and decided to do the same as the others and put up the Code 0.  I sailed for a while like that then the downhaul on the pole slipped, and I had to drop the zero and the sail went over the side; spent 10 min. getting it on the boat and by then I had lost the front pack so I reverted to my strategy from the beginning, head high and get into the next shift.  This worked out well, as the next one was more NW, which allowed me to put up the A5 and the RG650 was doing 14 – 15 knots, lots of fun.

Then the breeze started dying and went back forwards, so I rehoisted the zero and as it shifted worked my way to windward.  It only died for an hour or so then picked back u,  and I played the shifts to windward under jib. My strategy worked out, only hiccup was that big pattern changes were 1 or 2 hours out compared to the weather bulletins. I figured that out and worked my way up through the fleet.

I was in the lead when they cancelled, by that stage I had gotten enough weather gauge to lay Sada on starboard, the wind was up and I was doing 10 knots with code 0 close reaching direct towards the finish with many of the others becalmed.

I was 55 miles from the finish, then they cancelled race at 1800 sched.   Problem was that we were on the VHF but the support boats interpreted the message differently and then in English it was even worse. Some people were told to go to closest port, some told go to Gijon, for me would have been easier to go to Sada as I was laying it under code 0, but they told me I had to go back to Gijon, which was like 100 miles downwind.

It was a bit of a mess due to poor communications, competitors everywhere, and the support boats all interpreting things differently.  At this point the problem is that the boats are split up in two different ports, with 5 prototypes in Sada, and the rest of the fleet in Gijon. Even though it would be easier for the bulk of the fleet, the RC think its unfair to make the 5 boats go backwards, and in any case it is better to start the fleet closer to Cap Finistere.   All in all I am extremely happy with the first leg, even if it had to be abandoned.

I look at it as a show race; everyone is impressed with the boat’s speed and at one point I was keeping up with protos, which is really cool. I can’t wait to get going and hopefully I can do it again. This boat is super quick reaching and downwind, but everyone noticed it is fast upwind as well, which is not the point of sail it is designed or moded for.  There is lots of rake in the rig for the Mini Transat; we should kick some ass downwind.

I take as little shit aboard as possible, as weight is super important.  I learned a valuable lesson at the start; I loaded the boat up with the max amount of water allowed in the rules, and the rough weather made my water jugs break and I found I was much quicker with an extra reef and no water weight, even though it was stacked. The less ballast you have to use, the better.

The boat has no real damage, just a bit of chafe and one of the nuts fell off one of the spreaders’ inboard ends. I have a few leaks to fix up, and to reseal the mast, which moved a bit in the partners.

So you’re not pissed off they cancelled the race?

I would have been more than happy to just keep going to Lanzarote. I have had heaps of rest because I was sleeping that day so I could be awake when the storm hit.  I’m so happy with boat performance that the stop just doesn’t matter. 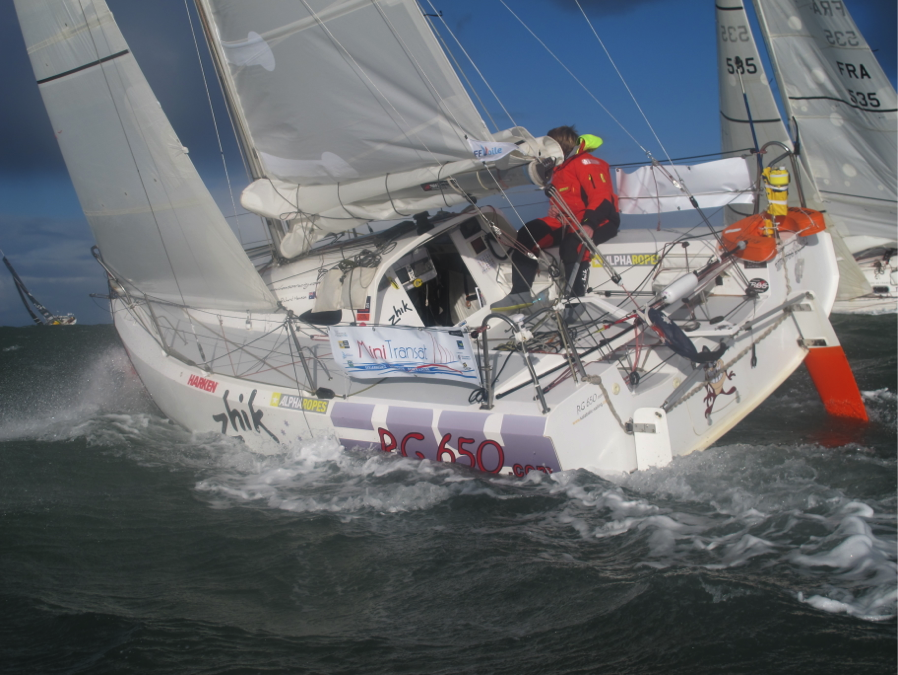 I don’t want to shitcan the RC, who have enough on their plate, and don’t need to be killed by everyone. The RC is doing what they have to do. The biggest problem is the fleet is so widely spread. If we’d kept going to Sada there would have been 3 days difference between the front boats, i.e. I am going twice as fast as the slow series boats, so the RC have a big job on their hands looking after everyone.

Besides, we found a great reef-and-beef steakhouse that’s super cheap with house wine for 4 euros so we’re off there for dinner, as we have been for a couple days, getting fueled up 🙂