The annual Sydney-Hobart ‘Let Multihulls Race’ thread is raging nicely in the forums, and the rambling discussion turned to the reasons behind the Hobart fleet’s shrinking trend, both in fleet size and worldwide stature.  Compared to the record fleets of recent Fastnets, Caribbean 600s, and Middle Sea races the Hobart is stagnant, even with one of the best Maxi/Canter/Mini Maxi fleets in recent memory on the line.

Longtime SA’er and master debater ‘Chris 249’ got deep into the reasons for the Hobart’s decline, and his opinion is our Post Of The Week.  Continue the debate in the thread.

The Hobart is very much a big-boat fest these days, whereas when it was more popular the fleet was mainly composed of much smaller boats. That means that very few people can now afford to run a “competitive” boat, as in one that will finish close enough to the bulk of the fleet and among a group of similar boats.

The change can be seen by looking at the Hobart itself over time, and in comparison with the Fastnet both now and then. The fleets used to look quite similar in terms of the proportion of big boats to small boats; now the Fastnet has a vastly stronger small-boat and medium-size boat fleet.

Looking at the last races (and throwing Hobart PHS boats and Fastnet 2H IRC boats in their respective divisions) we see that there is a striking similarity in the number of boats of TP52 size and speed and more in each race. The Fastnet had 24 starters in the Canting and Zero classes (One 100′ supermaxi, TP52s, fixed keel mini maxis, Volvo 60, Swan 60, Farr 52 OD etc) whereas the corresponding classes in the Hobart attracted 23 boats, including three 100′ canters and a 100′ fixed keeler.

If you add in the Class 40s and Figaro IIs (one designs I left out of the above calcs as there is no comparable scene in Oz) the proportion of ‘small’ boats in the Fastnet increases even more.

It’s also interesting to look at long-term trends. I found the ’79 Fastnet and ’77 Hobart fleets to compare their composition with the current fleets. At the time, the Hobart fleet (132 boats) was much healthier (compared to today and to populations) compared to the record Fastnet fleet (303 boats).

The Hobart fleet’s composition was also strikingly similar to that of the Fastnet, in terms of boat size and design apart from the fact that Class I (50 to 43 foot racing boats and big old cruisers) was miles bigger in the Fastnet, partly because of the 50-ish boats that did it because of the Admiral’s Cup*. For example if we look at (roughly) IOR 34-30 footers we see 116 boats in the Fastnet and 53 in the Hobart; pretty close to the ratio between overall fleet sizes.

Over time, though, the races have diverged to the Hobart’s cost. In the Fastnet it looks as if the number of “raceboats” over 38′ has actually declined as the fleet has grown and people move to cruiser/racers. The number of boats of 36′-ish and less has stayed static. The growth has been in the 40 foot cruiser/racers like Benny 40s….the sort of boat so many slag off but which keep so much of the sport going.

And why have the small boats stopped? Not sure. The Cat 1+ safety requirements have hurt. The accent is also all about the big boats, and there’s no real stepping stone from small boats and small races like there used to be. I think in the last days of the “small boats to Hobart” scene there was a strong (and often expressed) feeling that anything under 36 feet just was not welcome. As another example the CYCA, which used to have a JOG division (= MORC, for boats under 31′) AND a separate half ton class, now bans any boat under 30′ from even doing day races offshore. We have nothing like the Euro/UK quarter ton and half ton scenes or UK JOG, or the smallish OODs of the USA; there’s no replacement for the JOG and half/quarter scenes of yore. No owner-measured IRC certs are allowed so almost no small boat owners spend the extra bucks for full measurement and there’s no PHRF, so for the small-boat owner there’s only golf handicap and therefore no reason to try hard or sail well.

I sold an investment property a few months back and thought of chucking the cash into a boat for the Hobart etc, but decided there was no point when the small-boat numbers have dwindled so much that there’s no one to play with. It’s a vicious circle, especially when no one seems to give a fuck about stopping the spiral. So I race dinghies and boards and will do some local racing; ironically now I’ve moved away from Sydney’s big boat oriented scene I can race my 4kt “SB” again. CBF crewing on big boats as I don’t want to specialise in doing just one thing.

What the Hobart and Fastnet analysis does show, IMHO, is that increasing the proportion of big fast boats, and the emphasis on them, really does nothing to increase the race’s status, viability, fleet size or competitiveness. The idea that putting in big multis will increase interest and therefore numbers falls down, IMHO, when we see that putting in big canters has done nothing to increase fleet sizes and may have reduced them. People are not getting into the race because the fast boats are getting faster….. in fact they are no longer turning up like they used to. It’s no fun getting to Hobart to find that the party is over.

As is so often the case, it’s the much-abused practical boats like Beneteaus that are keeping the sport strong and healthy, and the scene that concentrates on spectacular boats is the one that is sick.

And the Fastnet shows that people WILL still sail offshore in fairly small and cheap boats if they are encouraged, rather than bagged out for sailing 5 knot shitboxes. But there seems to be a big cultural difference between the RORC and CYCA these days.

All just my 2¢ worth, it’d be interesting to hear from Fastnet and Bermuda racers and guys who still do the Hobart.

* 57 boats did the AC but at least 9 or 10 of them were chartered UK boats or boats from France, Holland, Ireland etc which would have done the Fastnet even if there had been no AC. 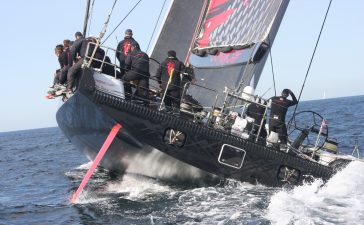