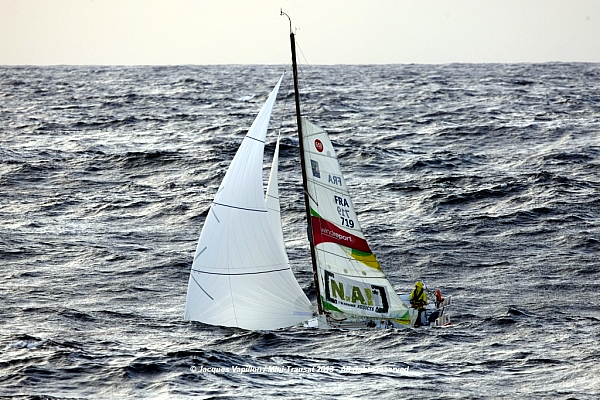 With conditions deteriorating quickly in the Bay of Biscay, the organizers of the Mini Transat have abandoned the first leg of the race, recommending nearest shelter for the already quite spread out fleet.  Disaster magnet Jefferey MacFarlane’s story ends badly; the American skipper dismasted while near the front of the fleet and is on a ship, shadowing the fleet.  625 lost his keel and is on a cargo ship.  Two others collided near the start.  And the list of damage and injury throughout the fleet from the first two days must be long and nasty.

Half the fleet is headed for Gijon while most of the front runner protos will get to Sada and some may scatter for whatever port they can make, considering the awe-inspiringly bad sea state that still awaits those stuck at sea. Once Poseidon settles down, there will be a lot of running around trying to figure out how to salvage one of the world’s best races; keep abreast in the thread.