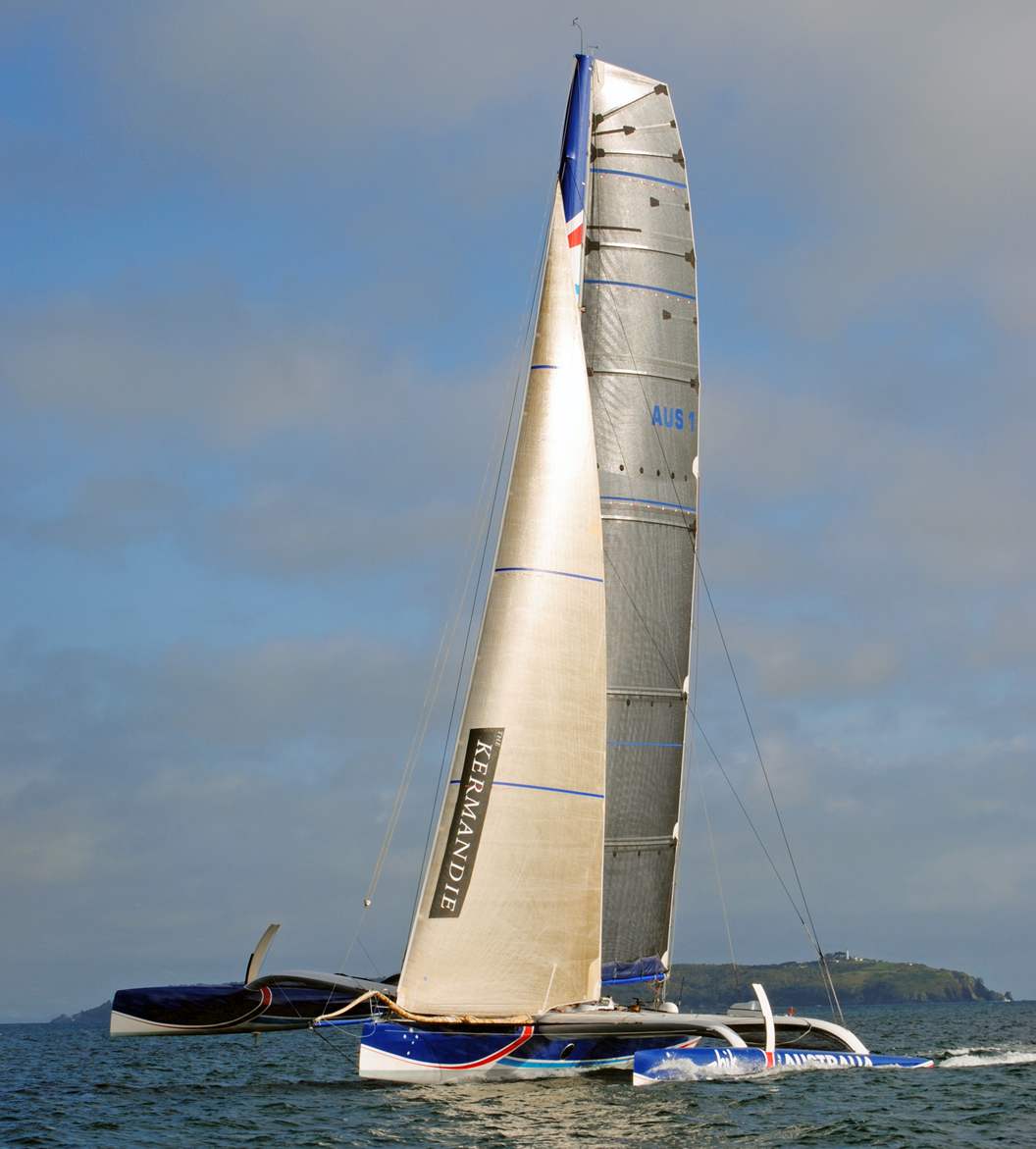 Sean Langman’s Team Australia (ex-Banque Populaire IV) just set the reference time for the Sydney to Auckland passage at 2:19:02:45 – that’s an average of just under 19 knots for the rough and unpredictable stretch of water. TA dried themselves off in Auckland, grabbed ‘pick-up crew’ Moose Sanderson and Dean Barker, then promptly sailed the wrong course to lose a practice race to the big South’s other ORMA – NZ’s Team Vodafone Sailing (click here for cameraphone video).

Both boats square off later today as the Coastal Classic begins, and NZ’s marquee fleet race is clearly doing something right; 139 monohulls and 25 multis entered for a 100+ mile race in a country no bigger than a shoebox ain’t bad!

Here’s the report on the record run from crew Ben Kelly, and be sure to check the thread for the trip ‘as it happened’: 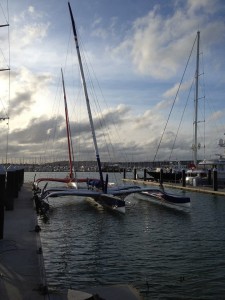 “Funny, I expected the boat to make the speeds feel like less, but doing 22-25 knots a couple of hours out from the heads felt crazy fast because of the sea state and our high angle to the breeze. Then as we slowly cracked away into the night I got to experiance 25-30 knots, this is pretty full-on in 4mtr waves and quite a violent action on the body that took some time to get used to. By early morning we were seeing up to 40 knots of wind and the speed sitting around 32 knots, and every now and then with an insane burst of acceleration, we would get a run on that would take us to 36-38 knots and then work its way back to around 32 again.

I would say that whilst the high speeds are quite full-on and the adrenaline is definitely pumping, the action of the boat improves by the time you are doing 35-40 knots.  With the boat simply obliterating whatever whatever it’s going through, it’s more of a vibration, and one of the best felings I have ever experienced.  I’m sure the motion changes depending on the sea state and direction and especially the angle to the breeze.

“The best true wind angle seemed to be 115 degrees, at this angle in 30+ knots of wind the driving is easy, the boat behaves insanely well, she is bow up with 2/3 of the leward float out of the water and the centre hull in/out constantly. Unfortunately we had the wind at around 80-90 for a big part of the leg across which just held us back a little from consistantly higher averages, basically if the top end of NZ had have been 100 miles further south I think we may have done 600+ nm for the 24hrs. You have to trust the foil when driving, on non foil boats you tend to have to run away with the pressure. With a foil that works so effectively when the power comes on and you are staring down the back of the next big growler you head up (if you react early enough), put more power into the boat, the bows rise as the boat accelerates and the foil works even more, then you get to the back of the wave in front and launch over it from behind as if it is a ramp, basically the best feeling ever!

“The problem is at 80 degrees true you feel like coming up is a bad option and you feel like going down is bad so quite often you just hold your course and your nerve and let the boat do its thing! Give me the helm of that thing, 25-30knots of wind, 4-5 metres of swell 2 x reefs in the Main and the smallest HWJ jib and I would be in heaven! I miss it already.  All the best to the crew of the Coastal, I think they have the legs….”

But here’s even bigger news:  In just 60-odd days, if this interview with Sean Langman is accurate, Team Australia and Team Vodafone will race against each other in the Sydney-Hobart!  But before you old Sydneysiders fall off your rockers – no, Bob Oatley’s America’s Cup challenge hasn’t suddenly spurred the CYCA to join the 21st Century, and no, the Hobart Race won’t stop being ridiculed as the race that allows diesel-driven keels and winches…but no multihulls.  Apparently, dealing with these conditions doesn’t make a boat safe enough for the Hobart…

Instead, the two ORMAs will sail the S-H pirate style, starting two hours after the last boat is off and presumably tearing through the fleet handily on their way to a new S-H record that Wild Oats fans and motor-driven yacht lovers won’t claim is ‘unfair because of different conditions.’  This is going to be the most exciting Hobart in years, thanks largely to two boats that aren’t even allowed to race.  Follow that thread here.

give it away now