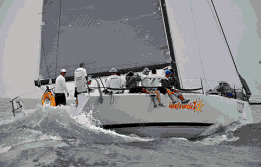 At 0135hrs local hours on Friday 18 October, Royal Hong Kong Yacht Club (RHKYC) Sailing Manager, Alex Johnston, received a distress call via satellite phone from the skipper of Walawala 2, Steven Manning, reporting that the yacht had lost its rudder and was taking on water. in the RHKYC Audi Hong Kong to Vietnam Race. Manning also advised that there were no injuries to the 10 crew.

The RHKYC also set into motion their Crisis Management Plan with the team assembling at RHKYC Kellett Island and the yacht Krampus, another competitor in the Race, was identified as being the closest to Walawala 2 and was directed to Walawala’s position.

The crew of Walawala 2 were safely on board Krampus by 0405hrs and by 0440hrs the GFS helicopter was reported overhead. Given the distance of 130nm offshore and the limits on operational flying time at the scene, only 8 of the 10 crew were able to be winched aboard safely in that time.

The remaining two Walawala 2 crew remained on the yacht Krampus who subsequently made the decision to retire from the Race instead of continuing to Vietnam, and began making their way back to Hong Kong.  Meanwhile, the GFS helicopter returned to Hong Kong with the 8 Walawala 2 crew members and were picked up at the airport by RHKYC staff and taken to the Club’s Kellett Island clubhouse.

Early reports indicate that Walawala 2 lost their rudder which in turn allowed water ingress at such a rate and volume that Manning was forced to make the decision to abandon ship.
The crew on board range in age from 21 to 59 and some are Hong Kong residents. Their nationalities are British, New Zealand, Australia, Singapore, Australia and Canada.
Walawala 2, a Sydney GTS 43, was one of 17 yachts competing in the RHKYC organised Audi Hong Kong to Vietnam Race.  The event is sailed under ISAF (International Sailing Federation) Category 1 Offshore regulations which require at least 50% of the crew to have completed a sea survival course and first aid training.

a death in florida