How’s about a little HD action after a busy week?  We’ve got you covered.

In his decade-plus-plus of Melges 24 racing, Brian Porter’s Full Throttle has w0n everything there is to win – except a Worlds.  It’s a remarkable record, especially considering Porter is a real dude with a real job, though it doesn’t hurt to count folks like Melges Prez Andy Burdick as some of your closest friends – and your tactician.

In any event, with just two races to go in the ‘it’s not normally like this’ M24 Worlds in San Francisco, Porter is exactly where he’s found himself so many times; one point behind the leader.  With longtime FT trimmer Sam “Rashid” Rogers off on new baby duty and four-time M24 World Champ Fed Michetti subbing in for the week, will Porter’s bad luck streak end with that elusive victory?  Not if Flavio Favini has anything to say about it!  Some nice vid from an anonymous videographer, with voiceover from long time SA’er Justin Chizz.  Pierrick Contin photos here.  And some really pretty HD vid from AC boffin John Navas here.

Kiteboarding not quite extreme enough for you?  Surfing or boardsailing just too ‘grounded’?  Or maybe you’re just looking for a way to get more performance out of your dirigible?  Have we got a product for you!  It’s French, of course.

Grant Dalton helped foster the idea that a loss in AC34 would probably mean the end of the team.  But after the performance of their lives, it’s great to see the homeland ain’t giving up on the Kiwis just yet!  During a massive homecoming welcome in Auckland, Economic Development Minister Stephen Joyce pledged government $upport for a TNZ challenge for the next Cup, and given the ROI for the 2013 event – and the continuing credibility it gave not only Kiwi sailors but also the Kiwi boatbuilders that built both ETNZ and Oracle’s AC72s – it’s easy to anticipate at least a portion of the tens of millions going back into the TNZ coffers as the early stages of contract negotiations and sponsor hunts begins.  If not, there’s always the public, and they’re digging pretty deep themselves, and already have more than 20,000 Facebook fans behind them in just 10 days…that’s 10% of what the Cup has after 3 years…

On another note, SA’er “DryArmour” seems to have figured out where it all went wrong for the Kiwis…story title inspired by the Dummies. 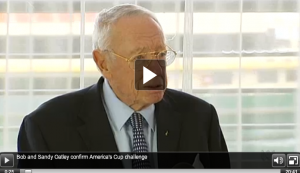 Given GGYC’s last Challenger of Record’s humiliating withdrawal and replacement CoR Artemis Racing’s feeble effort,  questions abound about the seriousness of the Oatleys’ Hamilton Island Yacht Club Challenge for the 35th America’s Cup.  It’s early days, but given the wine baron’s age and net worth and the luxury resort’s need for marketing, they seem like the real deal.  Judge for yourself after 20 minutes with Sandy and Bob Oatley in this ABC-recorded press conference.

dead but not gone