Rob Windsor is getting ready to do the Transat Jacques Vabre with Hannah Jenner on their Classe 40. Here’s his take on sailing with The Ladies… 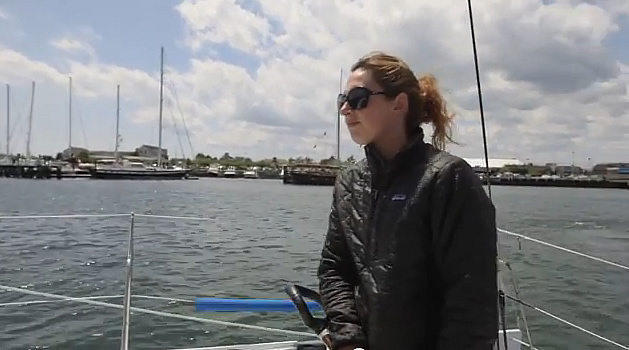 I have had the pleasure of sailing double handed on Class 40s with 3 different women. I sailed with Emma Creighton in the 2012 Atlantic Cup. We spent the whole month of May together. It was my first experience sailing double handed with a girl and I was a bit worried at first. There was nothing to worry about, Emma said, I can do everything you can do. Some things might just take me a little longer. She was right, sailing with her was a real eye opener for me. It also taught me an awful lot about myself and about good teammates. Emma is now sailing with her fiance Dan on a Class 40 {momentum racing}.

Next up was Sara Hastrieter. Sara and I delivered a Class 40 from Maine to Charleston with a little pit stop in Norfolk VA for hurricane Sandy. Sara is the one who explained how tough it is for a girl to get a spot on an offshore racing boat. I never really thought about it before. I have sailed lots of offshore miles, but not many with women aboard. She also taught me a lot about looking after your co-skipper. Sara is currently in the running for a spot on the women’s Volvo Ocean Race team.

Now on to my current co-skipper and the woman I have sailed the most miles with, Hannah Jenner. Hannah is my favorite. She is the best all around offshore sailor that I have sailed with, guy or girl. That may be because I have spent more time at sea with her than most or something else entirely. Hannah out works me! That is just unbelieveable to me because I am a work hog. I am always the one who says, I’ll get it. I’ll take care of it. Well not with Hannah. I go off watch and when I come up she has shaken the reef out and changed to the big code sail all by herself! Now, we are talking about a 5′ 5″ maybe 1?? lb girl.Hannah was the first female skipper in the Clipper Around the World race. She also came 3rd in the TJV in 2011 and set the Class 40 record in the RORC 600 this year, oh and she was on Dorade, the boat that won this year’s Transpac.

I started with all of that to show you who I have learned from. Saiing with women is a lot different than sailing with guys. Women are smarter than men, sorry guys but I had to say it. They use a winch right off the bat when they think they won’t be able to pull a rope. Unlike me, who will pull so hard I rip the skin off my hnands and then in the end put it on a winch anyway. Women think about their teammate more than guys do. They wonder abut how you are feeling and in turn, you ask them how they are feeling. It makes for a closer team which makes for a faster boat. Women take care of themselves better than guys, that is for sure. When my watch is over, I am lights out asleep in minutes. Women wash their face off, maybe have some food, moisturize. It sounds funny but it’s true and in the end, they are better off and better rested than I am because the have looked after themselves.

Since I started sailing with women, I have changed my way of doing things. I try to look after myself better than I used to. I also try to look after my co-skipper as well. After all, we are out there on a boat with just the 2 of us. There isn’t anyone else to do it. I try to use my head more than my braun. I use a winch instead of ripping my hands apart {most of the time}.

There are a few more things to remember if you want to try this for yourself. Even though you are on the boat together and you call it “our boat” it’s really her boat. If you want to enjoy the trip you will need to remeber the little things. If you need some advice, I will give you my wife’s number and she can give you some of the pointers she has given me over the last 20 years. Check out the video.

in the beginning, there was…