are you there god? it’s me, larry. 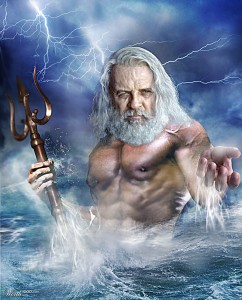 We’re not saying anarchists are eavesdroppers or anything, but SA’er ‘Grrr…’ has some info on an unpublished post-race interview with Larry Ellison on Oracle Team USA’s seemingly charmed life over the past few days.  If you don’t get the title reference, you’ve clearly never had your period.  And before you get your panties in a bunch, yes we edited this slightly, and yes you can find the original post here.

Gary Jobson: Larry, it’s been amazing in the last serveral days.  Races called off for too much wind while you were losing.  Races abandoned because they were past the time limit.  This string of luck just can’t continue.  Do you have any comments?

Larry Ellison: Well Gary, we knew the luck was going to swing our way.  Just a couple days ago we added a new team member to the payroll.  He’s a creative guy and he’s really given us an edge in every area – design, wind prediction, wind production…he’s really been instrumental to our recent success.

Gary Jobson:  We haven’t seen any new sailors on board, Larry?  Who is he?

Larry Ellison:    I had his direct number, Gary. I’m Larry Ellison, after all.  It’s not like money is an object!  God and I concluded the deal in just a couple minutes, and you can see how it paid off.   He did mention that he’s been wanting to talk to the New Zealanders for a while but really hasn’t had a chance.”

Larry Ellison: Yeah.  Something about them and their sheep.  No idea what that’s about.