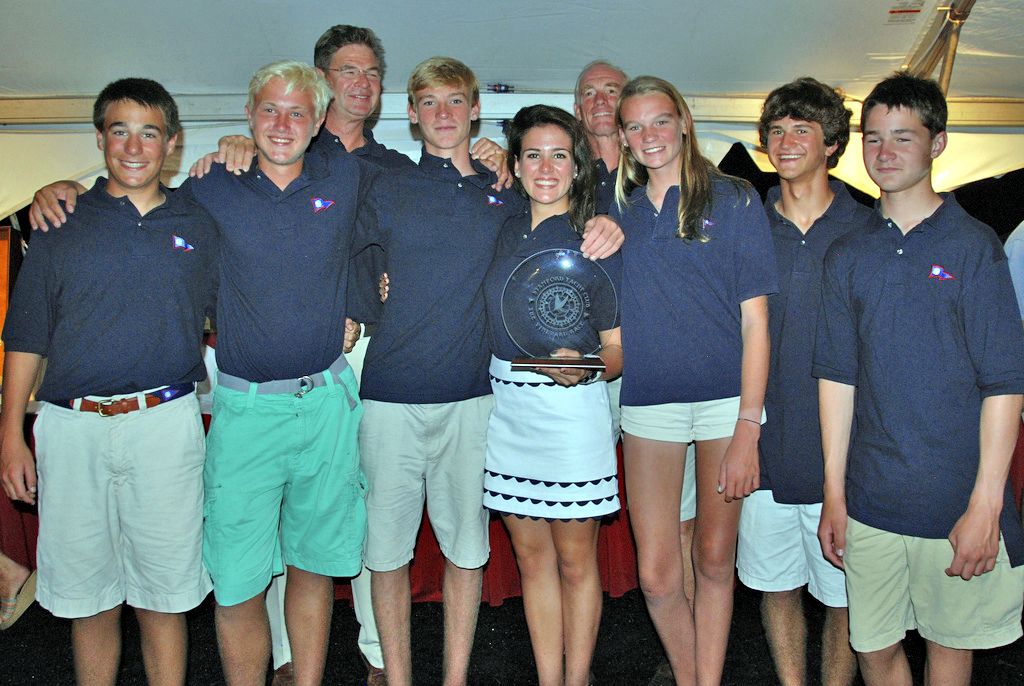 Many sailors compete a lifetime without winning a Vineyard Race, despite countless tries. But for eight junior sailors from American Yacht Club the first time was a charm as they captured the prestigious Vineyard Lighthouse trophy given annually to the boat with the best corrected IRC time.

The junior crew, sailing the J/122 PATRIOT, received the loudest cheers Sunday night at the awards ceremony on the front lawn of host Stamford Yacht Club for accomplishing something many in the crowd can only hope to do. They were also the first winner of the Corinthian Challenge trophy created last year by the SYC’s Vineyard Race to encourage young sailors to participate.

“I’ve never won a Vineyard Race, so this is a pretty magical moment,” said Peter Becker, head of the junior big boat program at American Y.C. who was one of two adults on the boat. “And to do it with our young sailors makes it even better.” Doug McKeige, father of one of the junior sailors aboard, was the other adult. Patriot beat out Rambler, George David’s sleek 90-footer, on corrected time, a feat they didn’t think possible when returning to Stamford late Saturday when they spotted her heading East off New Haven. “So she was 100 miles ahead of us,” Becker said. “How do we beat that?”

“You always wonder if there’s some smaller boat that is going to finish way behind you and beat you on corrected time,” Becker added. “This weekend, we were that little boat.” After the crew finished Saturday evening, they headed back to Rye from Stamford and it was only when they got to the dock they realized they had a chance when one of the crew received a text from a friend. It was confirmed when Becker headed back to Stamford to return his transponder.

The crew of Patriot comes from the junior big boat program Becker heads up at American. The eight juniors – Will McKeige, Colin Alexander, Sean Walsh, Key Becker, Carina Becker, Madeline Ploch, Haley Rodriguez and Sam Papert – have spent the summer with others in the program, not only racing but also cruising and learning all about big boats. “Big boat sailing delivers all kinds of experience and offshore racing is one such experience,” Becker said. 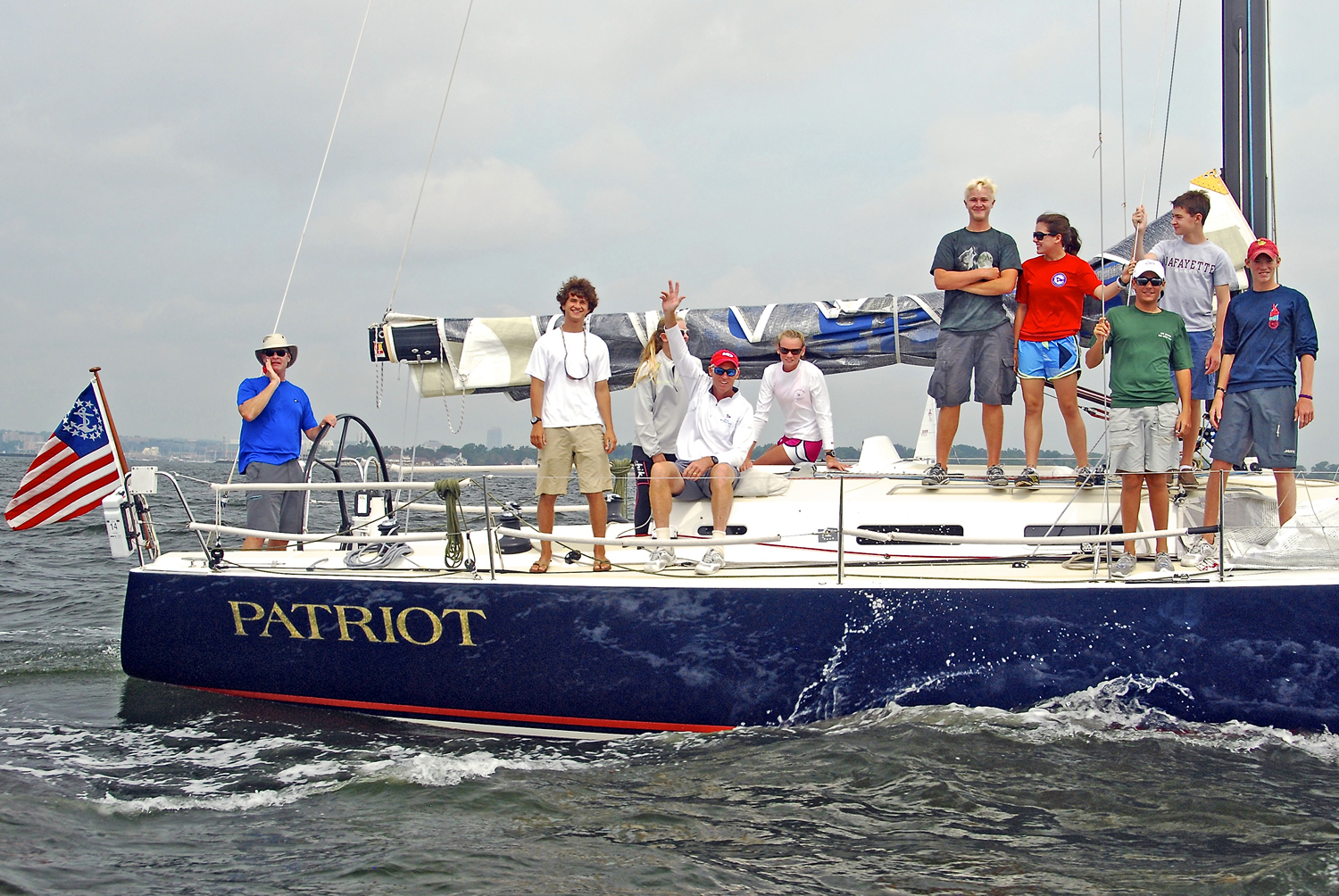 That’s when they started thinking about the Vineyard Race, but not many of them wanted to do it on a J 105. So the Vineyard Race was a bright star on their horizon and they wanted to figure out how to do this race.” Eventually they were able to secure the use of Patriot, co-owned by former American YC Commodore Steve Furnary and Vice Commodore Peter Duncan. The team had use of the boat for the Beach Point Overnight junior race in early August, but not much other time to prepare. One of the biggest challenges was learning how to use double halyards something they mastered pretty quickly.

The first hint they had that they were in the running for hardware was on the way out. The crew stayed with its original plan to stay down the middle of the Sound despite their competition heading off to one of the shores. The crew saw that several boats they thought should have passed them by Port Jefferson were still behind them. They continued to stick with their plan to go out the Gut, even though that was tested when they had a tight reach getting around the island after the lighthouse.

Most of the tactical decisions were made by the junior sailors. “I was playing navigator,” Becker said. “I presented various options and concepts. Doug (McKeige) would check various weather reports on his phone and the kids were into it and made the key decisions.” One of the junior sailors, Madeline Ploch, 12, was competing against her father, sailmaker Mark Ploch, sailing on Lir. During the ride out, when Lir was behind Patriot, Mark texted images of Patriot’s transom to his daughter wondering if they would ever be able to pass the smaller boat. They eventually did, but not before Patriot gave them a run. “It was fun having that father/daughter competition,” Becker said.

The eight junior crew members ranged in age from 12 to 16. Becker made special note of Madeline Ploch’s accomplishment. “If she does the Vineyard Race for the next nine years she will become a Buzzard before she ages out of the Corinthian class.” What’s next? After the team wraps up the 2013 season they’ve set their sites on Bermuda. They don’t have a boat yet, but are starting to look. Based on what they’ve accomplished in the Vineyard Race, that shouldn’t be too hard.

Patriot was one of five boats that competed this year in the newly-formed Corinthian Challenge. To compete for the challenge boats must have two thirds of the crew between the ages of 14 and 24 and enrolled in high school or college. The Challenge was created by David White (sailing coach at Fairfield Prep School) and Stamford Yacht Club’s Vineyard Race Committee to encourage more youth involvement in the event and sport.

Stamford Yacht Club Commodore Tom Campfield presented the Chelsea Clock trophy to the team for their IRC win and praised them afterwards. “Stamford Yacht Club is a strong supporter of junior sailing so Patriot’s win is very meaningful. We hosted several junior events this summer so this is a fitting cap to a great season. Congratulations to American Yacht Club and its team.” This was the 79th running of the Vineyard Race. This year 98 boats entered and 89 started on Friday of Labor Day weekend.

frank, gerry and me