of models and multihulls 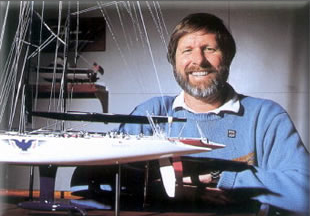 World-renowned model maker and all-around ultra good guy Ken Gardiner passed away last night after a long bout with cancer.  A craftsman who impacted so many sailors in so many meaningful ways, post your memories or photos of Ken’s work and life here.  From Alan Andrews:  “What a tough loss for his family and the sailing community.  Ken will be missed but will be remembered every day when looking at the 20 or so Gardiner half models of Andrews designs on our office walls.  He was the best model builder I know and it was a privilege to work with him when he had models to build for our clients…Sail on Ken.”

And from SA’er Morgan Crew: “On the bottom is USA-11, the 1992 IACC AC yacht that lost the defender series finals to “Citizen Cup”, Bill Koch’s America3 USA-23.  When I purchased this half hull from Ken during a trip to SD the keel was a generic blade as he was not allowed to divulge the actual shape of what was going to be used for the race.  After the race was over Ken contacted me and said that if I wanted to return the model to him, then he would re-keel the model with an accurate finned-bulb keel for me at no charge.  I took Ken up on his offer.”

SA also shares condolences with the family and friends of Alex Kozloff, who died last month at 89 years old.  Alex wrested the the Little America’s Cup back to California from Australia in 1976 and spent much of his life designing and engineering better ways to succeed in the adventure sports he loved.