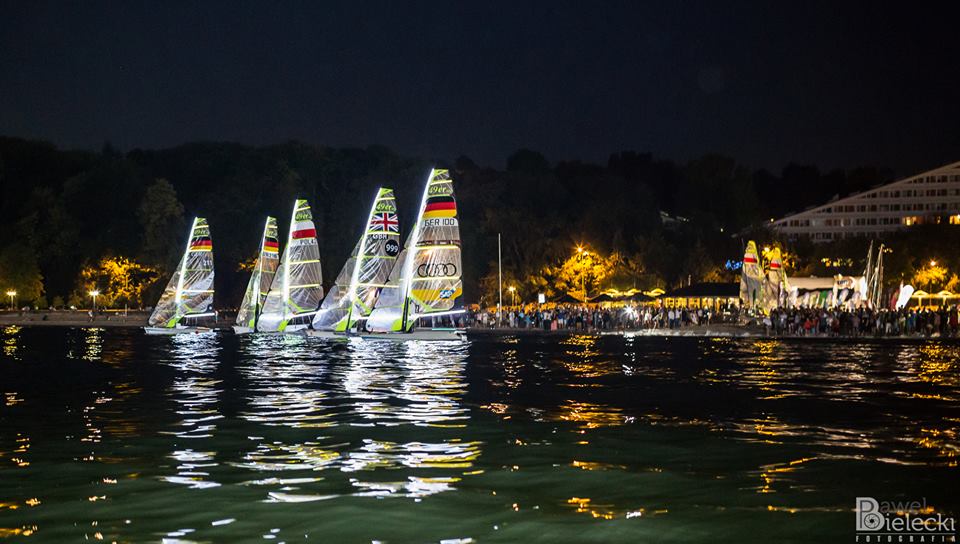 The 49er continues to dominate the skiff racing world, with nearly a hundred 49ers registered for this week’s Worlds in Marseille, France and another 53 girls’ teams registered in the FX.  And class scribe Ben Remocker puts it together pretty nicely in this guide below.  The pic above is not from Marseilles but from the 49er Grand Prix in Gdinia, but it’s awesome so it stays.

Marseille, France is the host venue of the 2013 Seiko 49er & 49erFX World Championships.  This championship has the largest attendance for the 49er since 2001, with over 96 49ers registered.  Additionally, there are over 53 49erFX teams registered, so the Mediterranean Sea will be a buzz with skiff sailing action.  Catch all the action Sept 24-29 on 49er.org, including live broadcasts from the semi finals (27,28 sept) and finals (29, Sept).

Both fleets face a similar challenge to each other.  There are two clear favorites, and each will be chased hard by the pack.

Nathan Outteridge and Iain Jensen have an impressive string of victories behind them with Gold medals from London 2012 and World Championships victories in 2009, 2011, and 2012.   They were unstoppable in London, the last time they raced against the fleet but since then have not sailed the 49er very much.  Nathan was called up to Team Korea to sail AC45′s, and then was picked up by Team Artemis.  He won the spot to steer the Artemis AC 72, Big Blue, and added Iain as his wing trimmer before too long.  After elimination from the AC, they’ve had about a month to get back up to speed in the 49er ahead of the worlds.  It will be interesting to see how the professional experience complements their game.  We’ve seen more experience with less practice work at times, with Iker Martinez and Chris Draper, but in the end it’s seemed like the ‘pro’s’ don’t keep up with the Olympians.  How will Nathan and Iain handle the dual focus?

Behind them is a large and talented pack of sailors dying to reach the top, in some cases again, but for the most part for the first time.  At the top of the list is Peter Burling and Blair Tuke.  London 2012 Silver medalists and recent Red Bull Youth America’s Cup champions, these two have been on an amazing trajectory in their sailing careers.  They recently won the 2013 49er Europeans in a dramatic final race shootout.  We got the pleasure of hearing Nathan discuss the rivalry between Australians and New Zealanders as he commentated the RBYAC and to be sure these two each wants to beat the other!

There are a whole host of other teams who could also win the event.  After london 2012, there have been 11 different champions of the major 49er regattas, so there is no shortage of talented and able teams who can step up and win.

In the 49erFX fleet, it’s a similar narrative and very different conditions.  On top, Ida Niesen and Marie Olsen have won every event they have raced in the 49erFX, but the gaps are narrowing.  They had a commanding victory at Palma 2013, where they showed the fleet how it can be done in big waves and big wind.  Since then, however, their margin of victories has been shrinking, and we saw some vulnerability in the lighter winds of the 2013 Europeans as some of the other teams are highly skilled in the lighter air.  Specifically, the Brazilian pair ofMartine Grael and Kahena Kunze along with Germany’s Victoria Jurczok and Anika Llorenz seem to relish the light air, and if that’s what we end up with in Marseille, Ida and Marie could be in trouble.

The real threat, however, is the bulk of the fleet and the pace at which all 49erFX teams are improving.  The now 55 boat fleet have only been sailing these boats for 10 months to date, and while some teams may have gotten off to a quicker start than others, it is the 4 year effort that will make all the difference in the end.  Most of these top teams are travelling and training with their 49er countrymen and coaches, soaking up 2 decades worth of knowledge as fast as possible.  There are so many talented teams, and so many champions out learning skiffs right now.  5 teams already have Olympic medals from other classes and they all are working like crazy to get back on top.  The other source of talented teams is the 29er phenoms.  Like in the 49er, more and more of the top teams are coming stright from 29er success into the 49er and 49erFX fleets.  To say that Ida and Marie have a target on their back is no understatement, not that they’d let that pull the smiles from their faces.

Join us for all the action on 49er.org to see if anyone can unseat the favorites.

our money is on the red one. we mean the black one.