Based on what we saw yesterday, Russell Coutts won’t need to search too far to see where the wheels came off the bus.  It wasn’t ruddergate.  It wasn’t the cheating or the penalties (though Russell Coutts is taking a hell of a bollocking on his Facebook Page). It wasn’t too much or too little partying, or bad designers, or bad outfits, or having an old boat.  It had nothing to do with safety, or with Bart.  And it certainly wasn’t a pre-start no call by the umps.

Nope – Oracle Team USA lost the 34th America’s Cup almost a year ago; October 16th, 2012 to be exact, when Jimmy sent the boat down the mine and got blown out to sea.  And it wasn’t the capsize itself; had Fresh and Tugboat and the other great seaman on Oracle properly planned for capsize and righted the boat without destroying her only wing, Oracle would almost certainly be on top now.  Or tied at zero, at least.  But in a competition where time is the single most important commodity, that cold day in October changed everything.  It stole months of training, modding, developing, and sailing from Spithill and his team just as ETNZ was learning how to sail above the water. 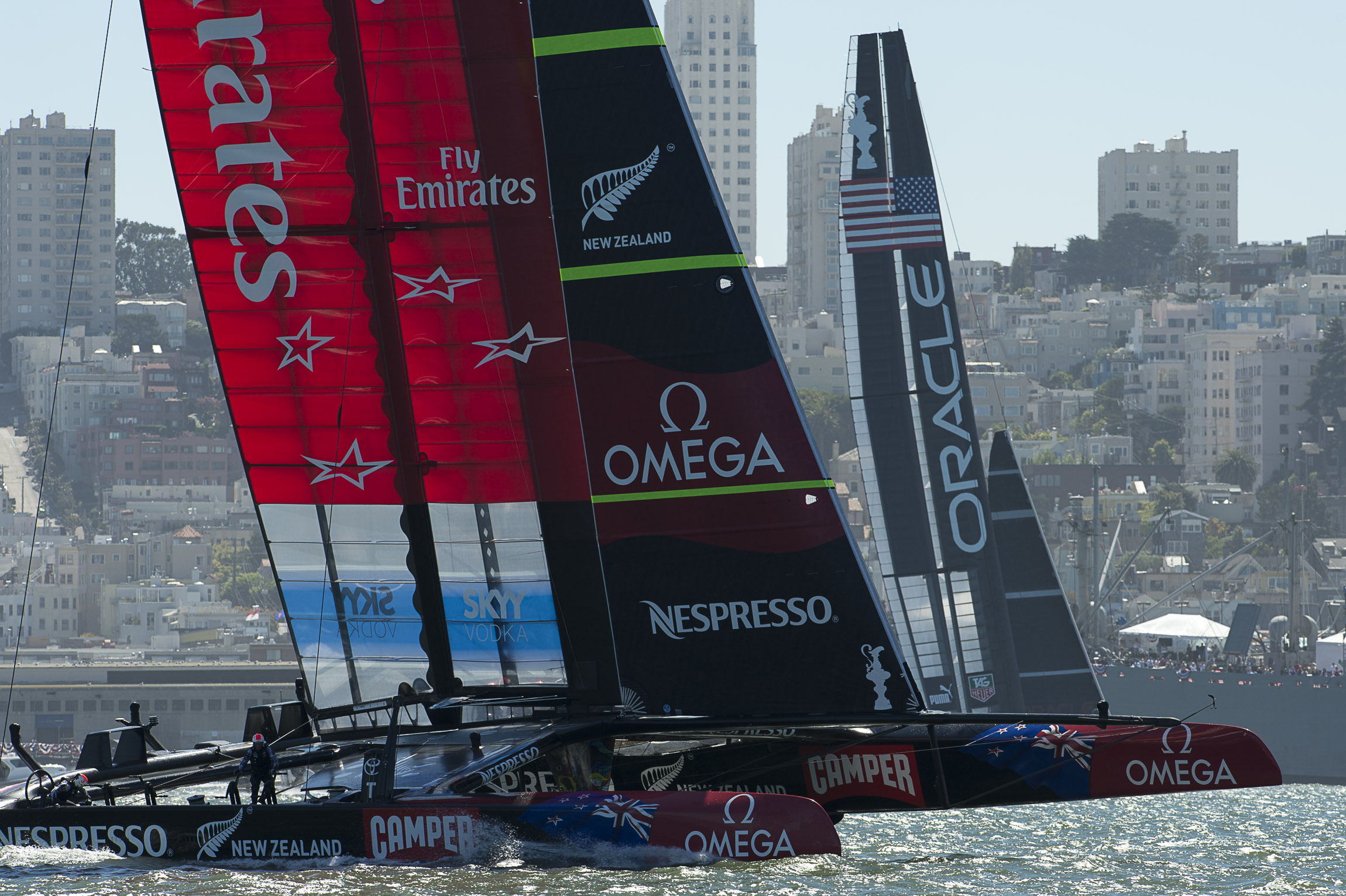 ETNZ are winning not with a major design advantage; they are winning it with practice, hard work, and time in the boat.  Have a look at the detailed data (Race 1 Race 2); Oracle are a second or two behind on the legs they sail well, with major errors costing 20 or 30 seconds.  The Kiwis are quicker to accelerate, quicker to gybe, and significantly faster at getting up to speed after tacks – that’s opening up their starts and making their tactics a lot simpler, and as long as Ray Davies keeps sailing perfectly, and if the wind stays strong, by next Sunday the Cup will be sitting in First Class on its way to the land of the long white cloud.

NOW YOU SEE ME

Meanwhile, the live TV feed from Race 1 was perhaps the single most exciting sailboat race we’ve ever seen on any screen.  For all their problems, the AC72 is simply awe-inspiring at speed on a big flat screen.  When they’re changing leads with every tack, coming within inches of each other through the spray and the noise, and it’s all caught by amazing cameras and the brilliant LiveLine system, it’s easy to cheer for Larry Ellison even as his team fades.  Could the commentating be a lot better? Sure.  Do we wish the NBC feed had no commercials?  Of course.  But from the graphics to the intros to the shots to the action, Race 1 was as good as any Super Bowl or Tour De France we’ve ever seen. 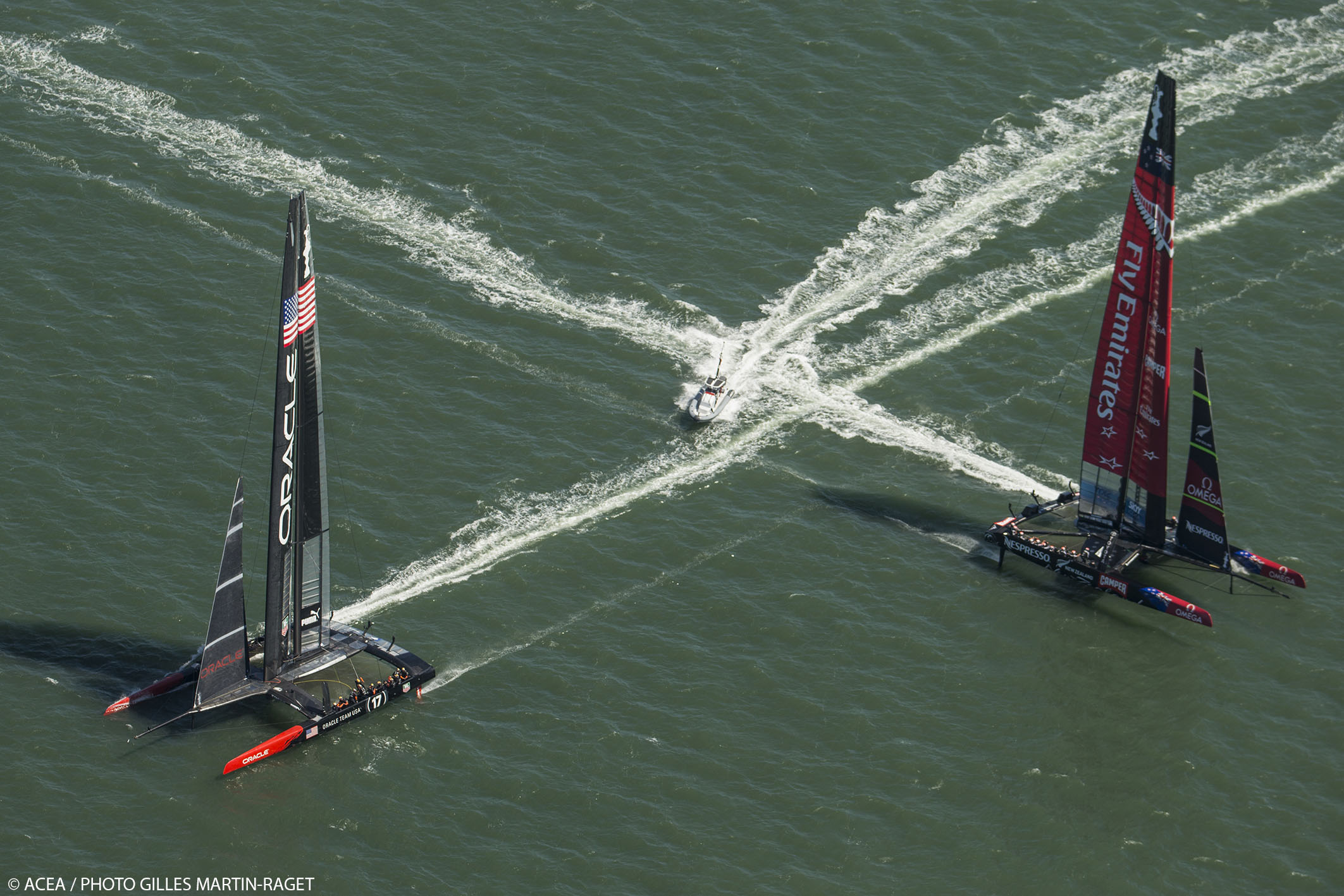 Furthermore, someone seems to have pulled all the Youtube geo-restrictions down for this America’s Cup, letting anyone, anywhere watch the action live.  We’ve been asking for it for months, and it’s great to see someone at ACEA decide to focus on maximum audience, rather than maximum TV audience.  Nice going, all – especially Ken Read.  The full replay (unfortunately, without Ken Read) is here, the Virtual Eye animated replay is here, and it’s worth checking out the 22-minute press conference here.

Is it time for fans of Oracle Team USA to slit their wrists?  Not quite yet, though Spithill and Kostecki’s look and sound at the post-race presser wasn’t inspiring.  If the wind stays below 15 or 16, a good start may win the race.  Under 10, Oracle may be a a lot quicker – no one yet knows.  The data say that NZ sails faster on all points of sail, even if they have to sail extra distance to do so.  Kostecki and Coutts and Spithill spent all night learning what it means, and Sunday’s racing should be something special.  We’ll have it right here on the front page.  Martin-Raget and Cameron photos.