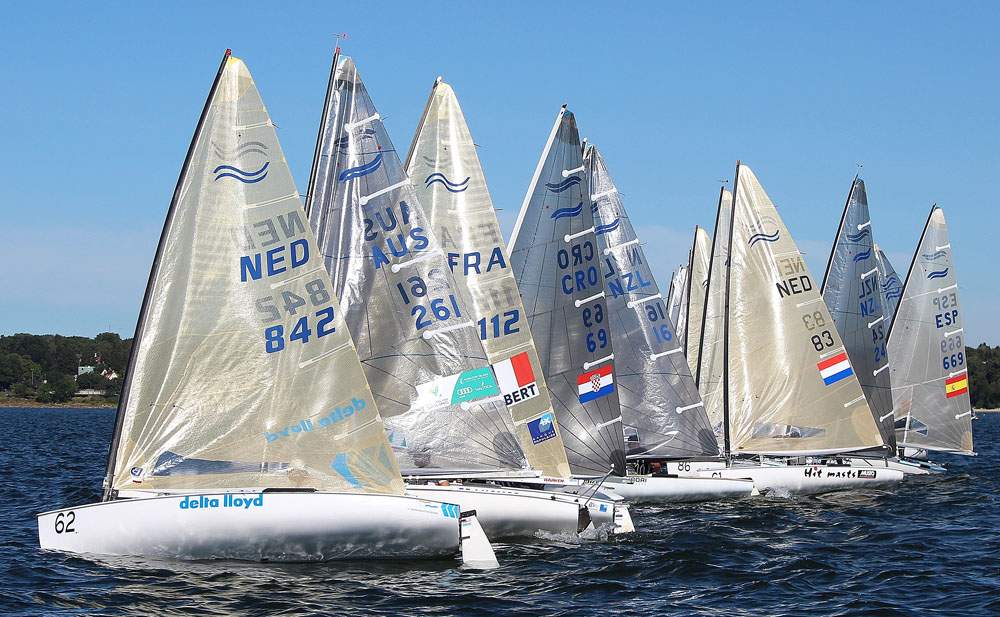 Finn sailors at the Finn Gold Cup in Tallinn have been putting down some big numbers on the score card as light and unpredictable winds have plagued the sailors for the first three days.

If it carried on like this it really will be the one who makes the least mistakes that will go home with the Cup. With four different race winners from four races and all but two of the top 10 having results outside the top 20, the scorecard makes for pretty interesting reading, as well as a reflection on missed opportunities by many sailors. The results may look like some random dice throwing game, but the racing has been surprisingly good, located inside Tallinn Bay, with the forests on one side and the city on the other. It really is a spectacular place to sail and the sailors are thoroughly enjoying being in Estonia.

So far the only sailor who seems to be making any sense of the conditions, or at least has made less mistakes than any one else, is Andrew Mills from Great Britain. Normally preferring strong winds he is slightly surprised at his performance but still not taking anything for granted. Monday’s race winners were Oliver Tweddell from Australia and Jorge Zarif from Brazil, both winning their first Finn Gold Cup races. In addition to two top ten places each, Tweddell has a 22 and 33, while Zarif has a 44 and 24, and they are both inside the top ten overall, before the discard come into play after the fifth race.

Second and third after the first day were 2010 World Champion Ed Wright, from Great Britain, and Matt Coutts from New Zealand. Their results of 28, 21 and 43, 37 respectively on Tuesday tell their own story of the tricky conditions the sailors are facing. Tuesday winners haven’t faired much better. Pieter-Jan Postma dominated the first race of the day, but then recovered from around 60th at the top mark in the second to cross in 36th, to add to his 45th from Monday.

Mills won the final race on Tuesday to seal a 17 point lead at the top, a lead which stands at the end of Wednesday after all racing was abandoned as the wind failed to build beyond the five knots required for racing. Some are hesitantly forecasting a bit more wind for the remaining three days. Racing continues to Saturday. Results are here. – Robert Deaves.

this bud's for you