Unsurprisingly, slapping foils on the most popular race boat in the world has got the Anarchists a-buzzin’.  SA’er “Phil S” has a few things to add; from the thread: 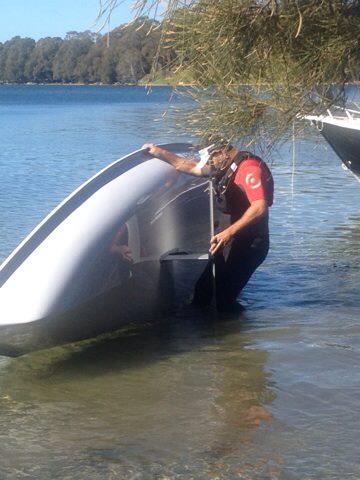 I may be able to answer some questions. I know both the gurus involved and that they have been working on this proect. I have not seen any of the kit but spoke to one of these people a few days ago. This is what I understand from that conversation.

The Laser does not need any modification, not even any additional screw holes. There is an insert which is bolted through the centreboard case, into which the foil strut is inserted and which has the necessary fittings to retain the foil in place and control the angle of attack. The rudder is installed into a standard Laser rudder box. They do not rely on the Laser bent tab to retain the rudder but a snail pin through a hole as is std Laser practice at least in Aust.

It is possible to insert the foil only from the bottom but it can be slid up so that the boat can be floated in shallow water. So far they have launched the Laser, walked to shallow water, rolled the boat over to insert the foil, then sailed out to deeper water before lowering the foil and rudder to foiling depth. Both the horizontals rotate on the T joint, the wand controlling the main foil angle, but somehow the rudder foil is free to rotate until the rudder is fully down. WardI has used this main foil system on his Moth for some years.

They are very pleased with the downwind performance so far but know that upwind will be more of a challenge and are working on techniques to achieve upwind foiling. They have some experienced foiling people planning a to test ride and provide input.

This is a serious effort, they have had tooling made and will shortly be doing some serious marketting. It may not be for everyone but with so many Lasers in existance only a small percentage of owners is still a viable market.