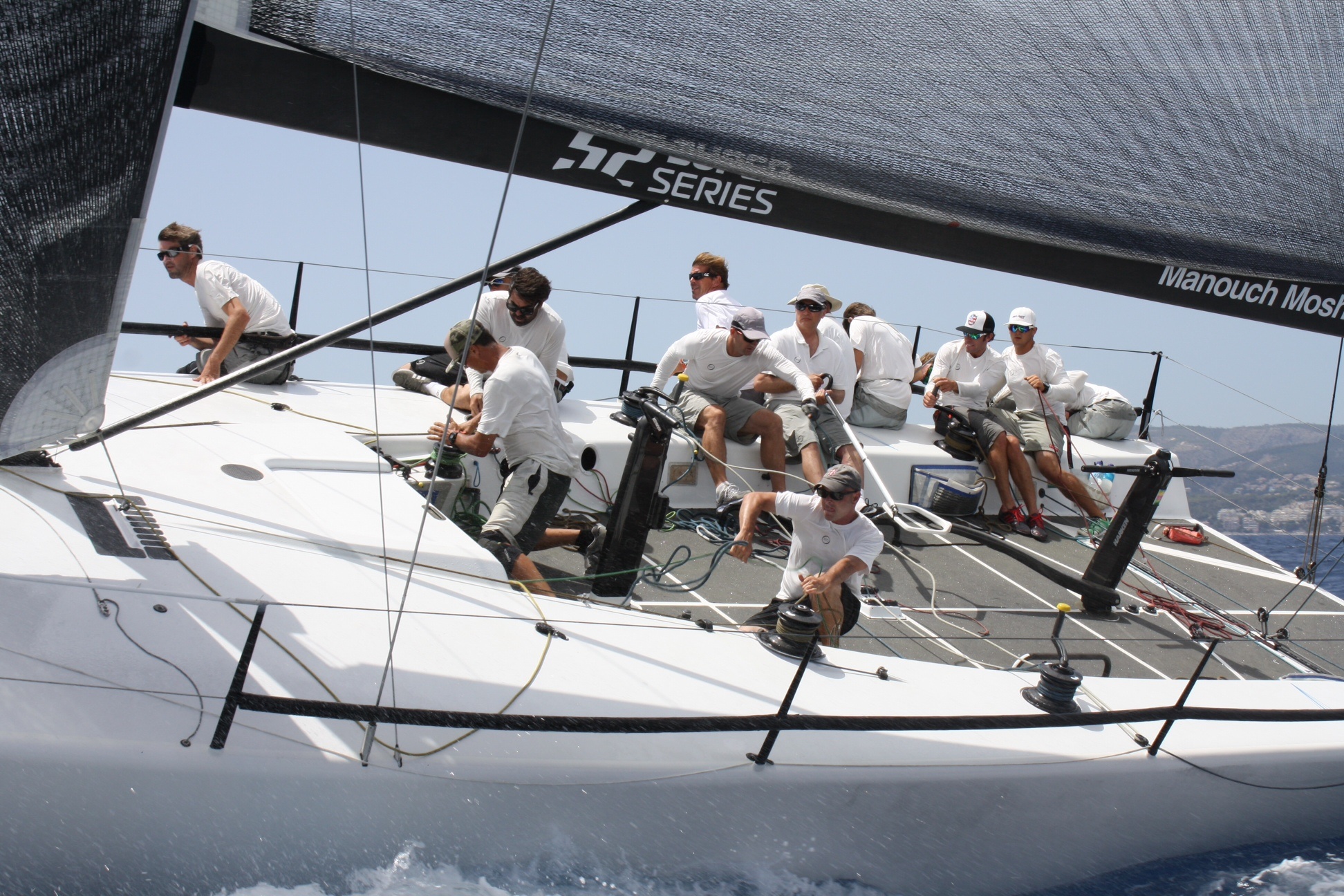 JP Penrod spins a monster of a tale from the TP52 SuperSeries/Copa Del Rey in Palma last week.  You gotta read this one.  Photos thanks to Mrs. Eduardo and Jonny GoldenNugs.

Team Rio, Manouch Moshayedi’s 2011 Botin designed TP52, is screaming downrange towards the final leeward gate of the regatta. We are in 5th place, by design, as we have ignored the fleet to match race Provezza, the Turkish entry, for fourth place overall.

25 knots of Mediterranean sea breeze and accompanying wind waves have Rio fully wound up under her A2 and the time-on-layline numbers called out by our brilliant navigator Paolo Persi keep dropping at an astonishing rate: “one twenty and thirty! one and twenty! 50 and 10!” Pulses quicken and throats tighten for the bow team: Morgan Gutenkunst, bowman, myself on the midbow, and Hogan Beatie in the pit.

Strategist Johnny Goldsberry says he likes the left going up the course. Tactitian Dee Smith says he wants the left gate and a quick tack to get us going left and directly on Provezza’s wind no matter how she rounds. In lighter airs this is a conversation I would never hear, being 30 feet forward, but in full-on conditions the bowmen hike at the aft quarter, waiting for the call to sprint forward 50 feet to the battlefield.

Dee calls out “straight in, left mark, and standby for immediate tack.” “Ok”, I think to myself, “the weather takedown is always the safest.”

Flash forward 20 seconds. Mo and I are running forward, just clearing the primaries- the drop is less than 10 seconds away. The grinders are disconnecting from the primary sheets and linking to the drop system. And bang. A windshift. We are not laying straight in and a deep and slow dive down in this sea state is a very, very bad idea.

What happens next takes a little bit of explaining for those unfamiliar with the modern inshore TP52. You see, we don’t really “drop” kites anymore- we rip them out of the sky via belly-cords connected to all four grinders turning on an internal high speed drum. It is a pure momentum game as the system requires a mechanical disadvantage to the grinders. All the different permutations of this move from leeward to weather to jibe drop require subtle, but critical variations in timing by the driver, by the lead grinder, by the pit man, frankly- by every single person on the boat.

Our jibe drop here, at this critical moment for team Rio in the 34th Copa Del Rey Mapfre, began as a different move- and because of that the timing was wrong and it could not be fixed. And just as time waits for no one- the wind and the sea don’t wait either.

I’m at the leeward rail, sucking in the clew as fast as I can. The grinders are blasting the center of the kite toward the bow hatch. Mo calls out to me, in the subtle code we’ve developed on the bow: “PANIC!” Instantly, I know the tack is in the water.
Perhaps I’ve got a bit ahead of myself- I should explain who we all are, and how we got to this critical moment.

Owner/Driver Manouch Moshayedi has been a figure in the Southern California sailing scene for years. A few years back he acquired his first Rio TP52 and sailed in the the Southern California IRC TP52 fleet: some local bouy racing, some ocean races here and there. The core of his team was boat captain Keith Kilpatrick, pit man Hogan Beatie, and lead grinder Jeff Messano. Keith knew some very strong professional rowers- Val Stepanchuk and Dave Kreuger, and recruited them for horsepower. All of these southerners are with the Rio today.

For those who don’t know, you can take a northerner out of the bay, but you can’t take the bay out of him. Such it is with Norcal born and raised Hogan Beatie. When Manouch looked to bring some new blood on board the old Rio, Hogan reached out to Cambell Rivers, Pat Whitmarsh, Morgan Gutenkunst, and Dan Malpas.  After a successful season in the SoCal TP circuit, Manouch was looking for a new challenge. Cambell suggested a number of options- including “totally going for it:” the TP52 Super Series.

Manouch threw down the gauntlet and bought the new Rio.  With some of his old crew unable to make the time commitment, and Dan Malpas tied down with his commitments to Oracle Team USA, I came on board along with Johnny Goldsberry as strategist and Francesco Mongelli as navigator. 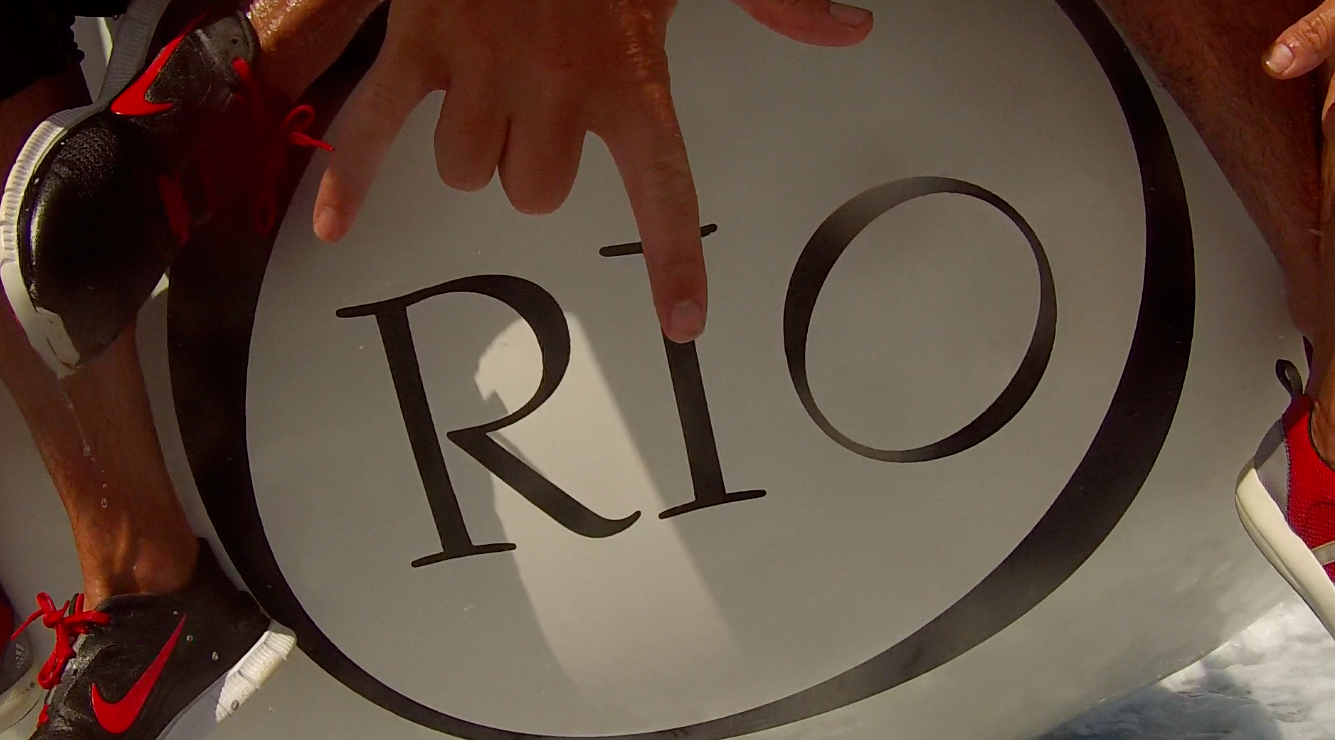 Our first two Super Series events were in Florida: Quantum Key West and the Gaastra TP52 Worlds in Miami.  Rio suffered through some teething pains in those regattas, and by the time we turned towards Europe, the final shuffling of the crew occurred bringing aboard a slew of well known international pro sailors: Mike Mottl, veteran of almost every Aussie America’s Cup campaign since the Kookabura, came on to trim the main; Ignacio Triay, the King of Spain’s trimmer through the Med Cup on Bribon, came on to trim the kite; and Andres Soriano, Volvo Ocean Race MCM aboard Team Sanya came on as our floater.

The braintrust in the rear of the boat has rotated based upon availability. Long time tactician (and personal hero of mine) Pat Whitmarsh left us after Ibiza on account of his impending wedding, bringing on board Dee Smith who did his best to try fill Patricks massive shoes. Francesco and Paolo Persi have rotated through the navigator position as their other commitments have allowed. The two constants in the command staff have been Jonny in the strategist spot and Manouch on the helm.

The first thing I was struck with racing at this level is how damn good all these other people are. The second thing I realized, especially through those first regattas, is how close we are to reaching them. Getting a front row seat to the best bow teams on earth setting and dropping gave Mo and I a chance first to emulate them, and now to try evolve beyond them. Crucial to our development has been the unwavering support of  Quantum Racing, who have essentially treated us as their B team, putting Brett Jones aboard during a practice day to check shapes, bringing their chase boat behind us during the pre-race tune ups to comment on our trim, and giving us world class service at the regatta sites. Also crucial to our improvement, especially in the last event, was Manouch, Cambell, Mottl, Ignacio, and Quantum Racing (especially Brett Jones) collaborating to develop our sail program- because in this fleet, the difference between first and last can be measured in meters gained during the first beat.

Although our results in Barca and Ibiza didn’t look a lot different on paper than the first two events, in fact those meters were slowly reeling in. In Palma, on her one lane race course, the gains finally came home and we were able to put consistency into our results, turning 7’s and 8’s into 5’s and 6’s, and 4’s and 5’s into 2’s and 3’s. As you all know- consistency is the key to this whole game.
Consistency goes deeper than just race results, however. Cambell, Mo, Patrick, Goldsberry, and I have sailed together for almost half of our lives. We’ve known and sailed with and against Hogan and Keith for almost as long. Likewise, Manouch, Keith, Hogan, Val, Dave, and Messano have been sailing together for years. Time in a boat is critical to success. Time together is critical for survival: especially when split seconds count.

Which brings me back to my tale from the bow. Morgan and I have a way of communicating that is almost telepathic (I am not exaggerating when I say that we have had 20-30 word conversations between each other during mark roundings that consisted of nothing but both of us shouting the exact same profanity (i.e. “[email protected]#%! [email protected]# %!!! [email protected]#&!!!!”), yet we communicated volumes about the situation and our next moves. Hogan has known us long enough to pick up on it as well- slamming clutches open and closed to give us precious milliseconds of unloaded sail.

So when Morgan came sliding back to me, arms wrapped around the guts of the tack, screaming “PANIC!,” I dropped the clew, wrapped my arms around the same section, and we simultaneously pulsed 100% of our strength, breaking the tack free, and gathering it into the boat.  Manouch carved a perfect arc around the right hand gate. Mo and I hit the rail, fist bumped, and looked back to see Jonny Goldsberry, standing at the aft stanchion, smiling ear to ear- because we are heading the way he had wanted to go all along.

Yeah, we crushed Provezza in that race.

where is my mind?

a cat in a lion’s den