turn the other cheek

Ron White made the F-31 trimaran Cheekee Monkee pretty famous over the past few years.  We dug Ron’s extensive modification program (including canting rig and big lifting foils) and his great success with the boat (including his overall Mackinac Shore Course record broken this year by Il Mostro).  But of course most people remember Ron for his penchant for flipping the boat over; once quite famously on the Mack, once at the start of the Lauderdale to Key West Race, and then there are the ones that went unreported…

Last year Marine City, Michigan’s Rick Warner scooped up the Monkee, and he filed this report on his first Bayview Mac as owner of the re-named Cheeky, which sailed against just 3 other multihulls on the Cove Island course. 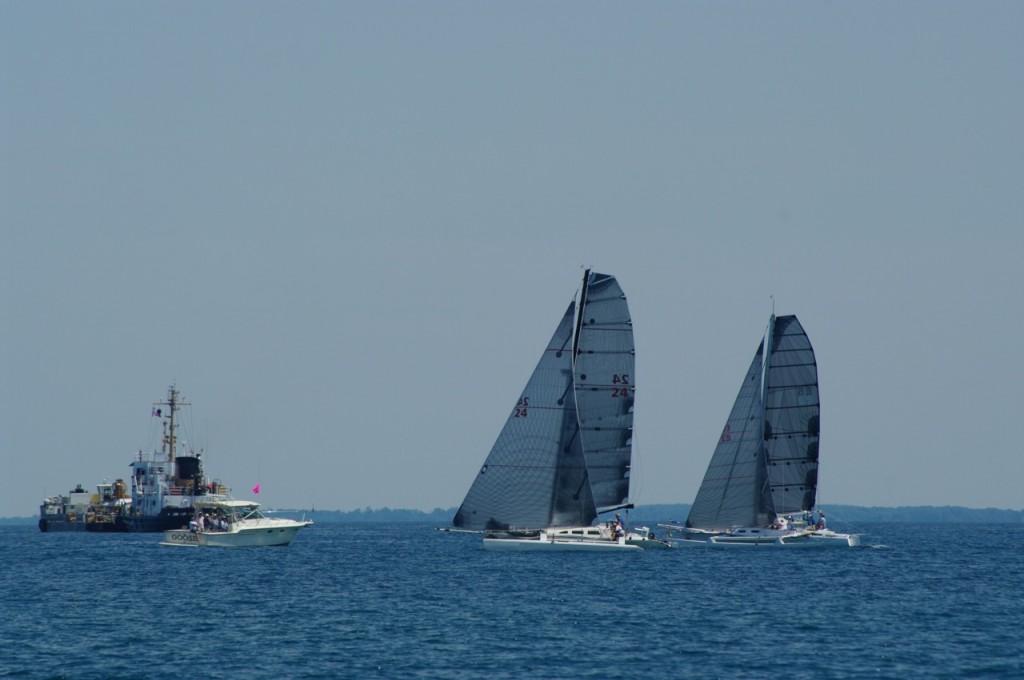 Last week’s Bayview-Mackinac Race  started after a team barbeque and a lovely ride on a 1930 Chris-Craft 100 Rum Runner as we prayed to the Wind Gods to step it up after the very light Chicago to MAC. Well, these gods delivered a friendly card or two to us on this one!

We won the start in moderate air, and watched the incredible Gougeon boats and their experienced crews slowly climb over our F-31.  It wasn’t long before a roll cloud began to form on the horizon.  Ron White, our navigator and a guy who knows this lake and this boat as well as anyone, gave his analysis; take the lifted board to Canada under this big cloud and bank on the eventual lift at Cove Island.

With 30 knots of apparent over the deck and Cheeky lifting on her foils and turning serious speed we pushed aggressively into the rapidly building chop and breeze.  It was almost like the wind knew when our shift change was up; Mike McGarry and I came on shift just as the wind began a quick build, and after throwing in a second tuck in the main, we locked in for a FANTASTIC 3-hour amusement park ride – one of the best of my life.

As Mike was reefing and I was keeping Cheeky slapping across the face of the water like she really likes, we rolled over some monohull; It might as well have been a big yellow dump truck for all we could see; at that speed, everything is just a watery blur.  Mike Fahle and Ron drove through another shift of fast, aggressive close-reaching, and when the son came up the next morning, we had a simple plan; stay on the Michigan side, work the rhumb line, and keep hauling the mail.  The next thing we knew, we’d bagged an incredible 9:30 PM finish. 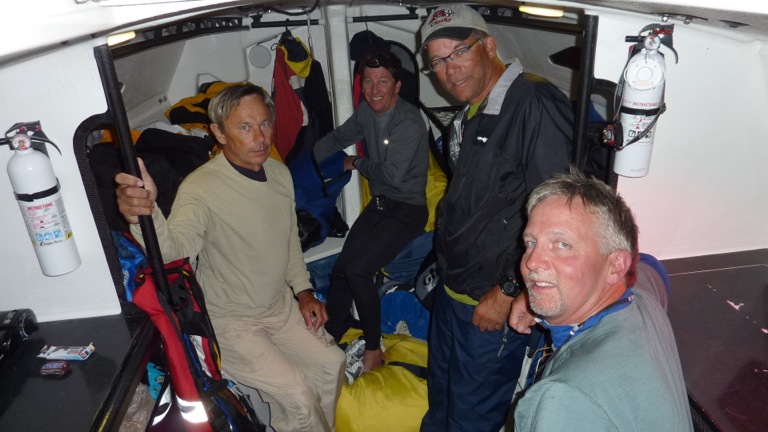 First to finish, first multihull, first corrected, and best elapsed and corrected time for all boats on the Cove course (including the GL70s, props to them for sailing the long course!);  Not a bad way to start your Mac career as an owner.  Sailing under Port Huron and Emeryville Yacht Clubs, an incredibly skilled set of guys brought us some more silver for a boat that can’t get enough of it.

I can’t say enough about them; sure, anyone who has competed against Ron, Mike, and Mike knows how good they are and how much fun they are to sail with, but what blew me (and our competition) away was just how confidently and skillfully they pushed the boat through some heavy conditions, making her modifications really shine.

anarchy in the front A breezy weekend in San Francisco nets a shot of foredeck anarchy from this weekends St. Francis YC J/Fest regatta,