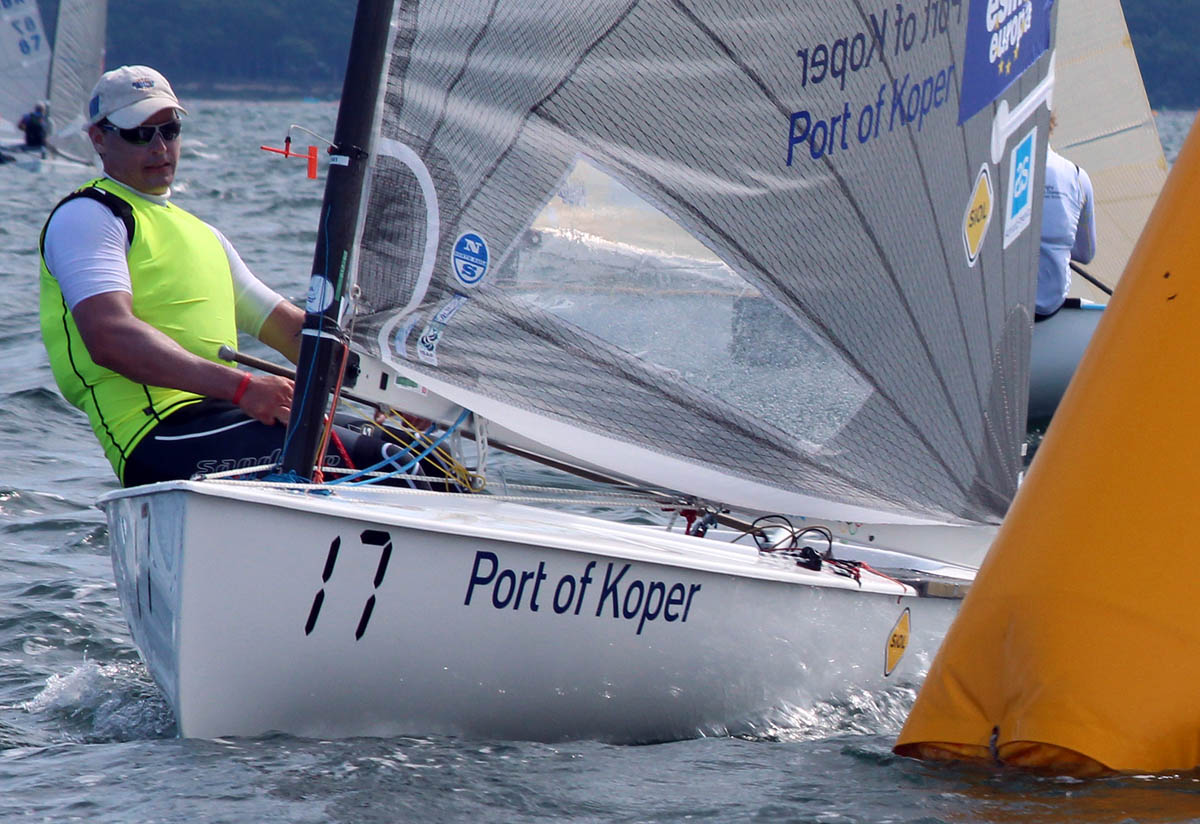 Already a national hero back home in Slovenia, and one of the country’s most recognizable sportsmen, Vasilij Žbogar took out the 2013 Finn European Championship in Warnemünde, Germany at the weekend without the final race being sailed. The event ended with a whimper on Saturday as lack of wind caused the cancellation of all the final races. However Žbogar was the deserved champion having clearly been the best sailor all week.

In an age when perhaps too much emphasis is being placed on end-of-regatta spectaculars, seemingly without a care as to who wins as long as there is drama for all, disappointment for some and a show for spectators, it was fitting that the best sailor won, and no-one, but no one, disputed Žbogar taking his first Finn class title.

In his past life as a Laser sailor he took the 2003 Europeans and then two Olympic medals. He then switched to the Finn to finish sixth in Weymouth last year, perhaps more an indication of the conditions than his ability. He placed second in last years light wind Europeans, but took firm control of the 2013 championship race from the opening day. Two races wins on the last two days capped off a consistent week in which he was never out of the top five round the first mark, which is some feat in a 103 boat fleet on a very shifty race course.

The promise of a big wind, big wave week in Warnemünde never really materialized though sailors got a good idea of the venue’s potential when the sea breeze reached 15 knots in a couple of races. Second overall Ed Wright from Great Britain was often faster upwind in the stronger breeze and it may have been a different week with typical Warnemünde winds in place. But Wright was one of the few consistent sailors in the record fleet and was justifiably pleased with the silver.

Bronze looked for a while to be going to new Kiwi sailor Josh Junior, but on the final day of racing another recent Kiwi recruit, Andrew Murdoch got more of the shifts right to trade places and sit in the bronze position going into the non-event medal race day.

And as if to prove that the UK had an inexhaustible supply of top sailors Peter McCoy took the Junior European title after a close battle with Australian world junior silver medalist Jake Lilley. The host country’s only medal was the Junior bronze for Lennart Luttkus. McCoy finished in 23rd in the main fleet, no small achievement in itself.

Many of the sailors left Warnemünde the following day on route to Tallinn, Estonia, where the Finn Gold Cup starts in a few weeks. Ironically, the day dawned with moderate to strong westerly winds, but unfortunately there were no Finns left to enjoy it. However, the Warnemünde organisers have vowed to bid for another Finn championship in the next few years and that would certainly be a popular choice.