Ronnie Simpson tells us s how their Class win went down on the good ship Criminal Mischief. Photos by James Clappier. 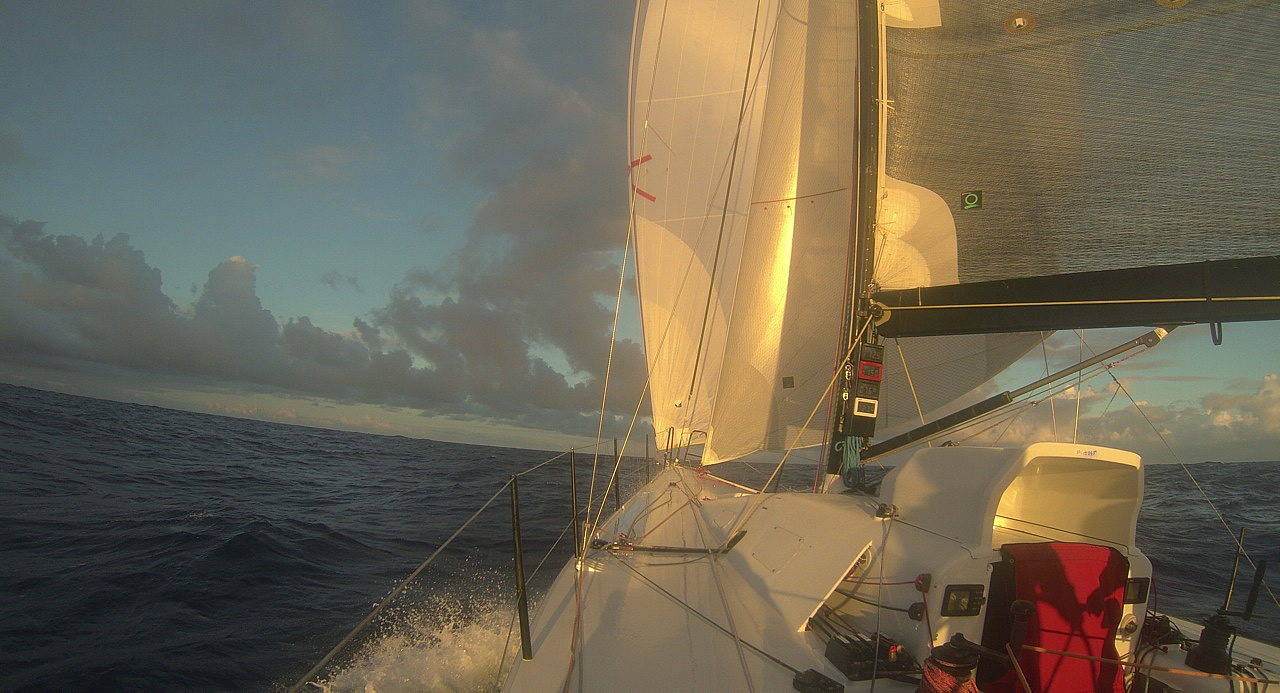 That was our margin of victory in Division 4 of this year’s Transpac. 3 minutes and 47 seconds… I’ve won and lost beer can races by more than that much time! What can I say, we had a great race on the R/P 45 Criminal Mischief. We found ourselves in a close race against good boats and good sailors but we scraped and clawed our way to a close win.

First, a bit of background to the team and program. Criminal Mischief is an R/P 45 built in New Zealand back in 2006. Formerly known as Beau Geste, she came to the Bay Area in 2008 and has been on a tear ever since. In 2009 she stomped to a Transpac class win and in 2011 she missed her class by under an hour. Add in a Pacific Cup class win and a few years of solid results and there was definitely some pressure for us to get a good result. Only skipper Chip Megeath and boat captain Andy McCormick were a part of the program during those earlier glory years and with the boat taking the 2012 season off, she had to start with an almost completely new crew. That’s where this current group of Criminals comes into play. We did sea trials in February, raced the Cabo race in March, did some local offshore stuff in the spring and now Transpac in the summer. So the boat has already been well traveled, raced hard and wrenched on for long enough to bring a new crew up to speed. Our practice during the ‘pre-season’ would come to help us greatly on Transpac.

We got hosed a little bit with being on the Thursday start this year. The Monday starters and Saturday starters had breeze leaving the coast, while we had full-on “Catalina Eddy” conditions; grey and gloomy, no breeze, and a localized low that caused nearly 360° of wind direction and massive holes with no breeze whatsoever. Drifting through much of the night with 0.00 on the speedo, we sailed hard but still managed to lose several miles to the two Rodgers 46’s, Bretwalda 3 and Varuna. The fleet made less than 100 miles that first day… We had dug ourselves into a hole early, and now our work was cut out for us.

Mostly sailing with the masthead genoa, we sailed at about wind speed, 6-10 knots. Cracking off and carrying the jib top and genoa staysail for a bit, the breeze began it’s transition to north, and so we cracked off further. The jib top was feeling a bit ‘cruisy’, so we knew something had to change. We were between sails and it was rapidly becoming decision time. Stay harder on the wind or put a kite up. The fleet was favoring the first option; harder on the wind with jibs and reaching sails, favoring the north side of the course. Navigator Brendan Bush and Ian “Coach” Kllitza discussed it and Ian made the call: “put up the A7”. 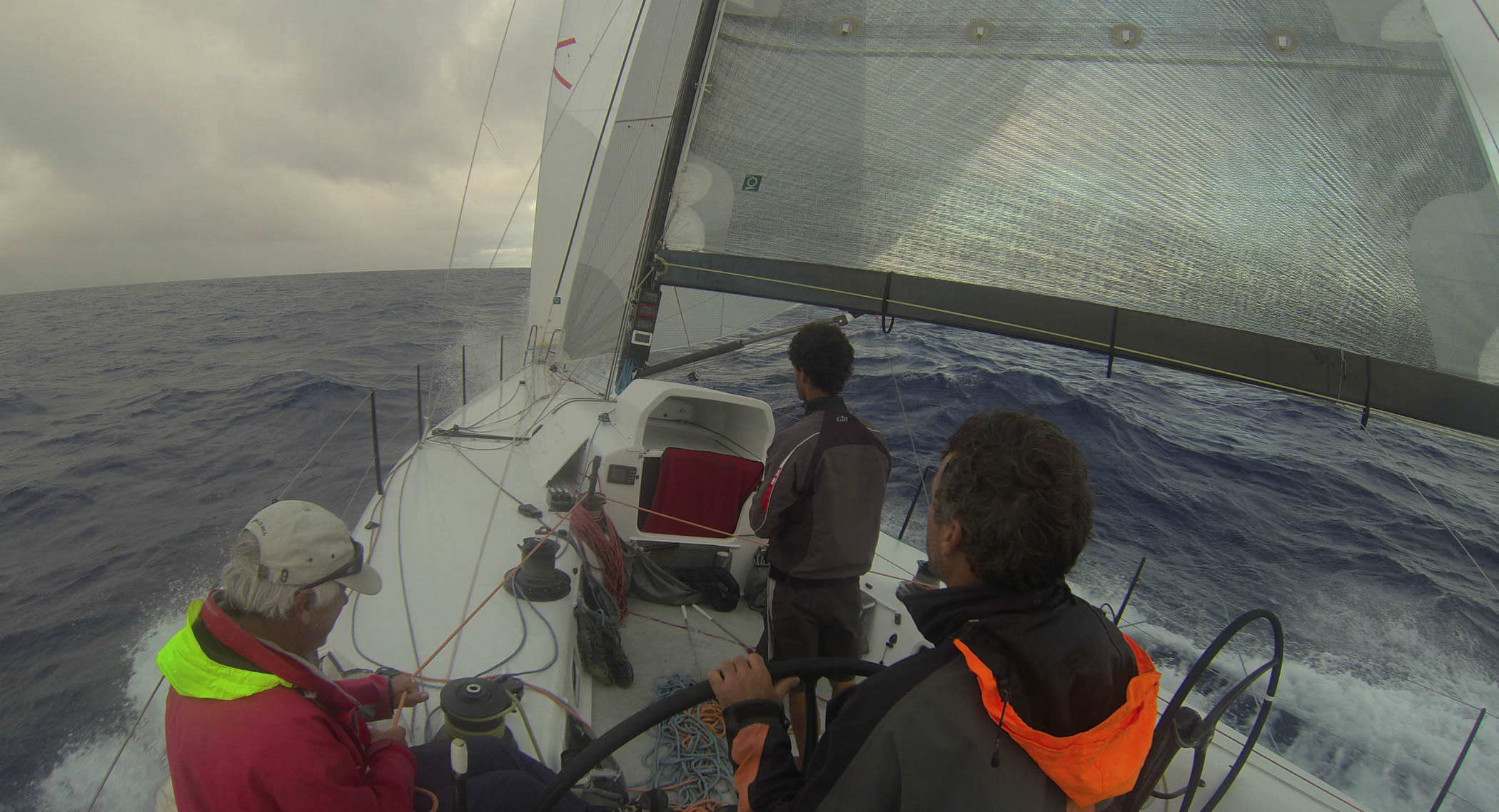 Our fractional heavy weather reaching kite, we can reach higher with it than our A3 or anything else in the inventory. With the A7 up and 13-15 knots of breeze we were making southing… in a hurry. Our decision had been made. We were taking the southerly route and it was now to be a navigator’s duel. South or North, which route would pay? The Aussie Open 50 Funnelweb followed us, but almost immediately into the race it was clear that we were racing the J/125’s and the Rodgers 46’s. The routing decision didn’t make us look too hot in the standings, but that’s often the case so everyone kept a cool head and “ruthlessly implemented the strategy”, ie- stick to the plan. We didn’t second guess ourselves and the right decisions were made. Major props to Chip and Andy, Brendan and Ian and really the whole crew for sticking to the game plan.

Faced with some tough decisions, we did the right things at the right times on the race course and it paid off. South of the fleet, we found ourselves in a puff header for more than a day which sent us rumbling straight to Hawaii. Taking huge gains on the fleet, our southerly route was beginning to look better and better. The Transpac standings and computer predicted routes of our competitors showed us virtually tied on corrected time.

The fleet consolidated a bit near the rhumbline close to the halfway point of the race. We had entered the dead downwind VMG running part of the race, gybing back and forth on shifts and playing squalls. And what a squally year it was… One morning, just after sunrise, a squall rolled over us and began a full-on downpour. As the breeze lightened, a column-shaped puff descended on the Criminal, wreaking absolute havoc to all aboard. A natural phenomena the likes that I have never seen in a squall, The breeze went from 8 to probably 24 when the puff hit, and the wind shifted more than 100 degrees. 2 seconds ago, we had been at a 140 true wind angle, and now we were head to wind. The boat never rounded up, we just went head to wind and began actually backing down with the kite plastered into the rigging. The kite, of course, was instantly reduced to shreds of sail material as a spreader tore it luff to leech. It took us a moment to get the bow down, and almost immediately we were back off to the races with a new kite up and the old one down. Total time: 3 minutes and 20 seconds for the maneuver. The good news is we didn’t lose much time, the bad news is that our new A2, (our only new kite for Transpac…) was dead. Add in two other sail issues and we were running with a couple of holes in our inventory.

Honing in on the islands, Brendan and Ian again dueled with the fleet on tactics. We made an investment to get back towards rhumbline and set up a port gybe northerly approach to the islands. Resolute followed, while the two Rodgers’ chose a more southerly approach with more time spent on starboard. The R/P 74 Wizard rolled right past us as we rolled a cruising boat from the Aloha division. Running down the coast of Molokai in up to 24 knots of breeze, (arguably the most we saw all race) we two-putted it into Diamond Head setting up a ripping reach to the line, doing 17 knots with the A7 up. Crossing the line at sunset on Saturday night, all we could do was head to the yacht club and wait it out. We owed the Rodgers’ 6 hours and the J/125’s a day. The next morning, we knew of the 3 minute and 47 second delta to the Bretwalda, but Resolute still presented a threat until that evening. Needless to say, after 9 days of racing and a day of waiting in port, it was quite a relief to know we had won! 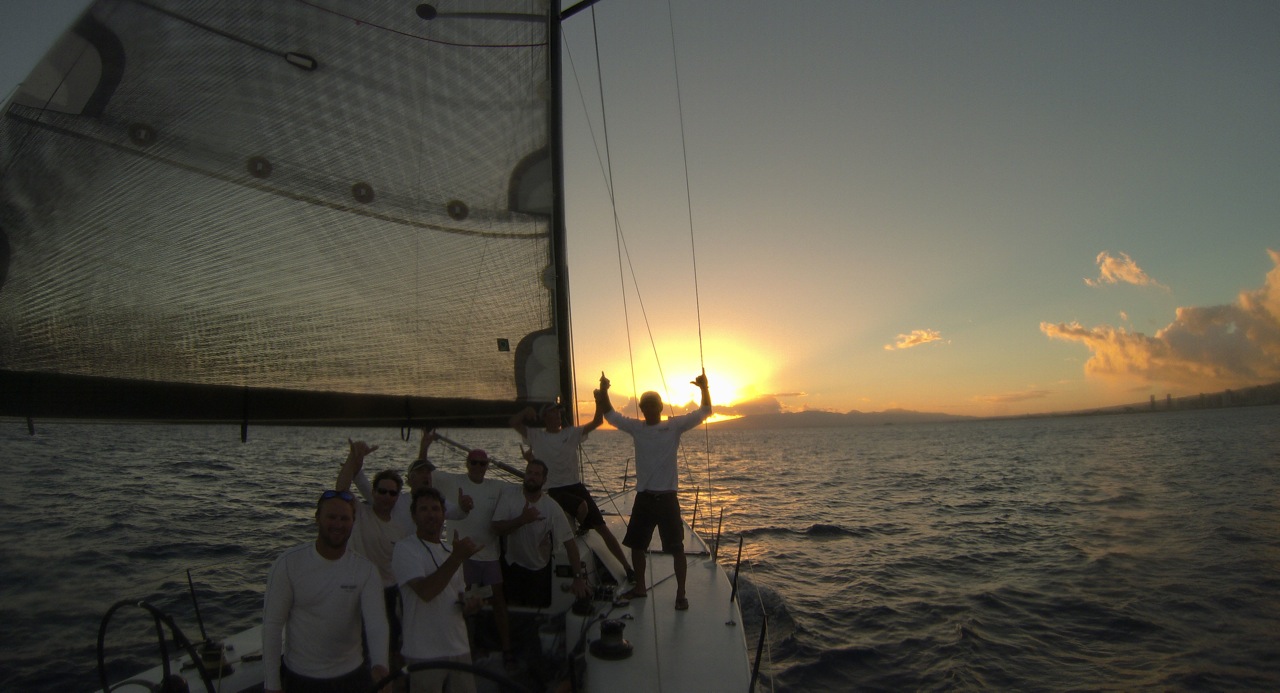 People always think the “hard part” of Transpac is going upwind for a day or three at the start, or fast-reaching in the middle, but a lot of time is won and lost by good downwind driving, spinnaker peels, gybes, crew work, constant spinnaker trim, playing squalls, packing kites… you get the idea. In a yacht race, there’s a lot more work going on sailing downwind than upwind. That “work” that I refer to; that was the moral of the “story” of Transpac 2013 on Criminal Mischief. Work. We worked hard and we did it as a team. 9 guys on one boat completely gelled and relied on our respective talents to work as a team and come out ahead. Everyone packed kites. everyone hit the grinder, everyone trimmed, guys made coffee for one another when getting off watch. Guys jumped out of bed to help with maneuvers during their off-watch. We had each other’s backs. For me, as a predominantly solo sailor, that was the most enjoyable part.