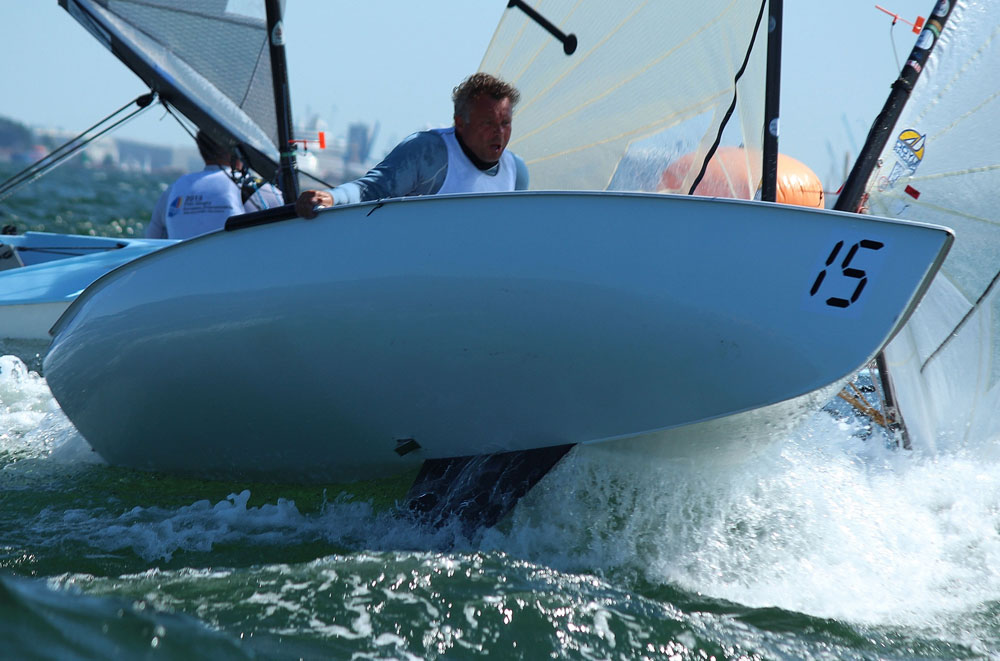 The race to be 2013 Finn European Champion has started to reach its closing stages in Warnemünde in Germany. The weather has caused significant problems with no racing on the first day and then threats of rainstorms and no wind towards the end of the week. However on Tuesday and Wednesday the 103 boat fleet (a record for the class) got in six fantastic races in near perfect Warnemünde conditions – sea breezes up to 15 knots, unbroken sunshine and fantastic surfing waves, plus a light wind tricky race on Thursday. There have also been seven different winners so far keeping it very tight at the top.

So far Vasilij Zbogar from Slovenia is leading the running with a pile of top scores despite two gear failures already this week. On Tuesday his halyard lock broke, dropping the sail at the windward mark and on Wednesday his mainsheet hanger broke, leaving him to sail the final beat with no purchase on the sail. He recovered to seventh and 13th in those two races, otherwise he would now have had a considerable lead on the fleet.

Unlike a lot of the sailors here he takes very few risks. He is always starting conservatively, always sailing the shifts up the middle and always in the first pack around the top mark. His downwind speed has also been key component of his armoury this week. Coached by Sydney silver medalist Luca Devoti you get the impression that he is here to win, and knows that he can. He won Thursday’s only race very convincingly.

The surprise of the week has been the under performance of the British sailors. Only Ed Wright, currently in second, has made any impression, while Mark Andrews, who has won the past three major events this year, and Andrew Mills, who won Hyeres, languish in 14th and 16th, 23 points outside the top 10 with one day to go before the medal race.

However the new kids on the block are having a good week with Kiwis Josh Junior and Andrew Murdoch pushing the front almost every race to sit in third and fifth. In addition, Max Salminen, Sweden’s Olympic Gold medal Star crew from 2012 is in ninth, clearly showing potential for the coming years.

Racing in Warnemünde continues to Saturday with three races Friday and then the final medal race, though the weather forecasts are not very encouraging. Extensive galleries are here and daily videos are here and here.

the guns of new york