one is the loneliest number 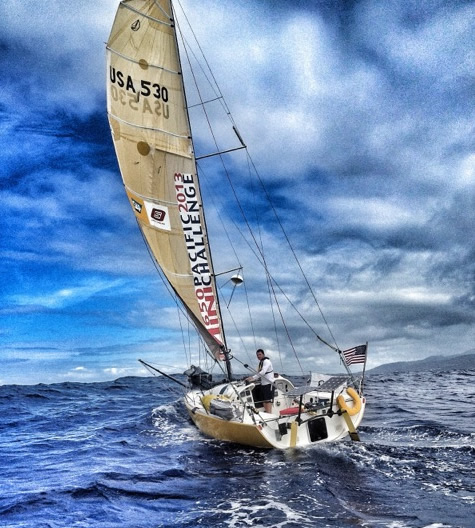 Sean McGinn sailed Daisy Cutter, his Mini Transat 6.50, across the finish line in Hawaii at 10:20am HST this morning to become the first ever winner of the Mini 650 Pacific Challenge. He has been at sea, sailing singlehanded, for 17 days, 1 hour, 20 minutes, and 58 seconds.

This inaugural race captured the imagination of all the Mini sailors in the US and had 7 registered entrants. Inspired by the popular, and very competitive, Mini Transat race in Europe this “mini-only” event was the first of it’s kind in the US and marks the beginning of an era for the North American Mini Class. In the end 3 boats made it to the start line but after an unfortunate case of “cold feet” and a “medical emergency” in the first few days, Sean McGinn became the only competitor.

Being the only boat in the race didn’t make it any less of a challenge and Sean has certainly been pushed mentally and physically as he sailed the 2,300 nautical miles single handed across the Pacific on a 21 foot boat. He has had to deal with all kinds of adversary – commercial traffic, debris in the water, breaking gear, periods of no wind, as well as violent squalls. Video recap here.

so near, and yet…