how the west was won

Paige Brooks takes us inside the Dorade Overall Transpac win! 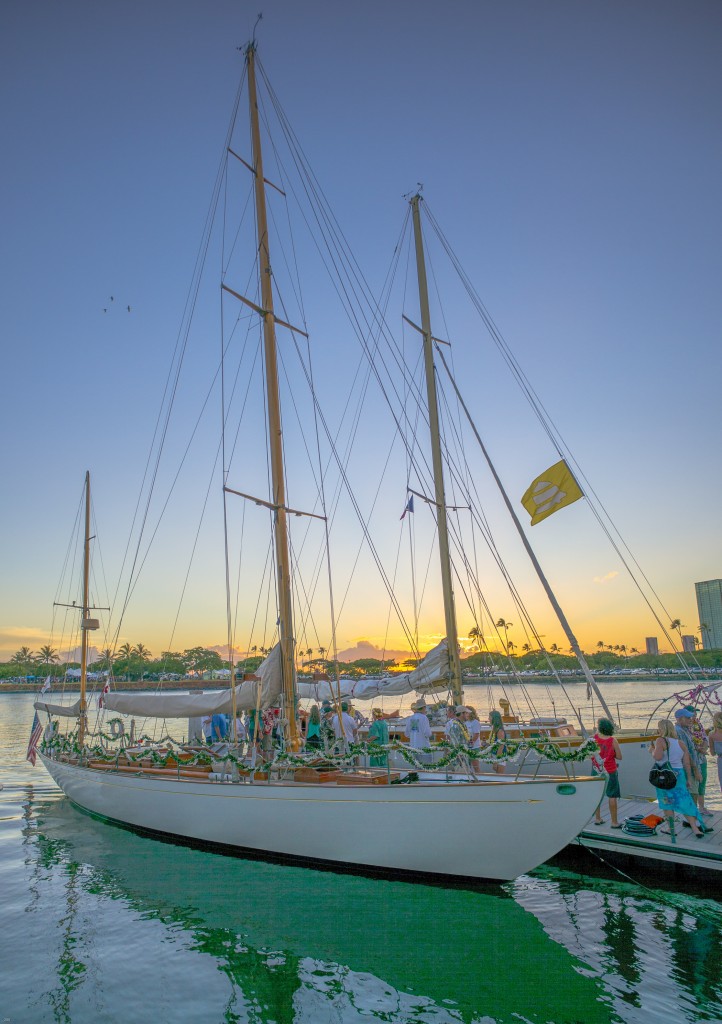 Dorade, the 1930 Sparkman & Stephens cutter rigged yawl – Olin Stephen’s first boat – is world renown for her early victories in the 1931 TranSat and Fastnet, for which the team received a ticker tape parade upon her return to New York. She is returning now to her roots of victory, winning again, first in class and first overall, the race she won way back in 1936. The TransPac. They may not get a ticker-tape parade when they return to San Francisco (wouldn’t that be nice?), but owners Matt Brooks and Pam Rorke Levy can certainly expect their fair share of heart felt accolades.

They and their crew deserve it. The boat after she was moved to San Francisco last fall, has been worked on day and night, put through her paces in all conditions, and sail tested by a number of crew. Dorade brings delight and a smile to each person who hops aboard her for a sail, and as a piece of sailing history, the 52′ wooden boat gets double takes where ever she goes. On every front, this boat is a classic winner, and a winning classic.

On July 8th with a crew who brought a great diversity of skills along with owner and avid outdoorsman Matt Brooks at the helm, Dorade set sail to win the TransPac. And they did it.

I chatted today with the Dorade Captain, Ben Galloway, who was just on his way to check out the surf on the North Shore in Hawaii.

Paige: Congrats Ben, I am really happy for you! So do you have stories to tell me?

Ben: Oh, you know I’m not that good of a talker, just ask me questions.

PB: What was the hardest part of the race?

Ben: The Hardest Part? Driving was a big thing, finding the balance between steering the course and keeping the boat moving at a good speed, and not getting too far away from the rhumb. The boat doesn’t go any faster trying to find weather. Going up the mast wasn’t easy either. We had to regularly check the rigging for chafe, cracks in the spectacles, the wood, but we never found anything. I’ve never sailed that far and not broken anything.

PB: What about the mizzen?

Ben: Oh yeah. The lashing on the mizzen mast block chaffed off and so I had to go up there early one morning, after my bowl of cereal. God the boat was rolling that day. I really didn’t want to go up there, I mean do you know how that thing is held up? So I had my bowl and thought I’ll just puke on them for sending me up if it gets bad. It’s this little mast and t the boat is just rolling and rolling, and I’m swinging out over the leeward side, then the windward side, I’m like get me down. We started trimming it in a bit more after that.

PB: How was the rolling?

Ben: We all have gotten used to that death roll sort of thing, you probably remember that from the delivery down the coast. You just gotta hold the tiller in the middle and she’ll sort herself out. Because of his work, Matt hadn’t been on the boat for a while and he did great offshore, really got dailed in. He did a lot of driving. I wouldn’t say it wasn’t easy, but it all worked out well.

PB: Did you have a lot of squalls?

Ben: Oh yeah we went through them. That was a hard thing too. When you do get a squall, you’re like how long is it going to last because it’s knocking you off course, maybe we’ll have to gybe, then you gybe and then the wind shifts and then you have to gybe again. You pretty much have to get everyone else up to gybe, you know there’s the head sail, the main, the mizzen spinnaker that has to be moved over, and the mizzen sail. Sometime’s we’d say, let’s wait five minutes, have a cup of tea and see how it is. Once we have 20 knots true, the boat just lights up and starts rolling. She hit 10’s and 11’s in that a lot.

PB: Did you see many other boats out there?

Ben: We saw Westward…on the tracker, even though it was delayed six hours, she looked to be next to us the whole race, but they were actually over the horizon. They owed us time so the fact that we were ahead of them didn’t worry us to much. We saw Ragamuffin one night on the horizon. They caught up to us so quickly, stuck by us for a bit and then disappeared into the night again. Some times it’s nice not to see any other boats as you lose focus on what you’re trying to do.

PB: So some phrase always comes out of the racing crew after a long race…what was yours?

Ben: We had a sun downer session every night, sort of a debrief on the day, where we were in the race. We’d have about 2 bottles of wine and some cheese. We did it in style. So we’d ask each other, you know what they say on Dorade? “More Canvas!,” and then answer, “No, more wine.” It doesn’t sound quite as funny now as it did then.

PB: You stayed pretty close to the rhumb for most of the race.

Ben: Towards the end of the race, team Sleeper became our hugest concern. We were slightly lower on the rhumb and they were highter. We got a shift near the end that allowed us to go a little north and get onto their rhumb line and then gybe back. When we saw the updated tracker we saw they hadn’t gybed and that secured our [good] fate. I think Sleeper ended up in 4th or 5th. We kinda had to wait a couple of days until we were sure we won the race as the sleds were coming in fast.

PB: How was the food on board?

Ben: Food was awesome. It was so good. We used this pro chef called Brenda Steele, she’s a friend of ours and runs Tererabite Kitchen. She did loads of frozen meals, as many as we could fit in the freezer and then Matt Smith made us freeze dried day bags with breakfast lunch and dinner in them which were great.

PB: I know you did a lot of brightwork down below before the race, how did it fare during the race?

Ben: I did a lot of protecting that before the race with birghtwork tape. All the tape got pretty messed up, so I guess it did a good job. Even the deck..it actually looked really good at the end. All the boys did a good job of being mindful of it because they knew how much work we’d put in before hand.

PB: What’s next for Dorade?

Ben: Back to SF, leave next week – we’re just waiting for this storm to go by -for arrival late August. We’ll do some AC watching, including on 9/13 we have a charity sail Matt and Pam had auctioned for the Leukemia Cup. As soon as that’s over, we will break down the boat and take her to RI and then sail her down to the Carribean for the winter. I haven’t confirmed yet but we’ll probably do Antigua Classic, the 600, and another race that Pam’s planning with JJ Isler that will have all girls team.

Ben: The crew turned out to be a really good mix, had the right skills and got along well. Even though they were fully professional crew it had a corinthian vibe.

PB: What about Matt Wachowitz will he get the Rudi Navigator Trophy?

Ben: Hmm, for all the celestial work with the sextant…I guess we’ll find out tomorrow!

Note: Check out the article that Anarchist Chris Museler just wrote on Dorade for the NY Times. – ed.