It’s all Hawaii, all the time here at SA…. Here  is the story on the lone boat left in the Mini  650 Pacific Challenge 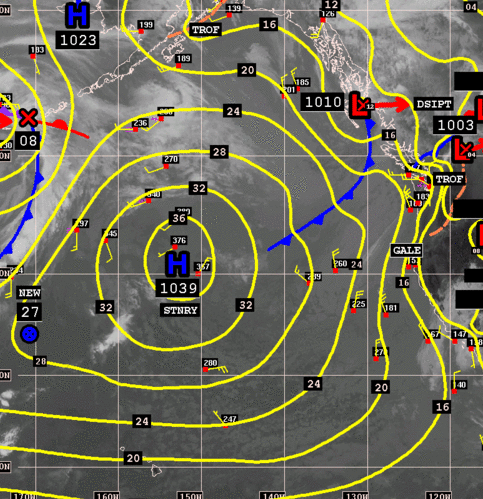 On July 18th it will have been 12 days since Sean McGinn set sail from Marina del Rey to Hawaii. In that time he has covered more than 1,600 nautical miles on his 21 foot Mini 6.50 TransAt sailboat and there are only a few more days until the finish line in Honolulu. It takes a lot of courage and determination to attempt this challenge and even more to do it singlehanded. With no one to keep you company, motivate you, or to help you sail the boat, the challenge is as much mental as it is physical.

Life on board is definitely a unique experience, a long way from the usual daily routine on land. The boat is sailing 24 hours a day and needs constant attention to keep on course. Even though there is an auto pilot which steers the boat while the sailor rests the amount of sleep is usually measured in minutes, not hours. The wind can change quickly requiring the sailor to hoist different sails to adapt to the new conditions. Sean is carrying a variety of sails to help maximize his boat speed in all different winds. His largest downwind spinnaker is more than 800 square feet which gives him plenty of power to catch waves and so far Sean has managed to push Daisy Cutter up to 14+ knots of boat speed – pretty fast for a 21 foot sail boat! Sailing offshore in the Pacific trades on the way to Hawaii is what every sailors dreams of experiencing – beautiful seas and skies, perfect wind and waves, and warm conditions. However, it’s not all smooth sailing so far Sean has experienced long periods of no wind as well as rain squalls where the wind can pick up suddenly and having the wrong sail up during a squall can make for an exciting ride.

The Mini 650 Pacific Challenge is a race of attrition. It’s tough on the boats, the sails, and on the sailors. Even though Sean is the only boat left in the race it doesn’t make it any easier. So far Daisy Cutter has been more than up to the task but there have been a few speed bumps along the way. A new and noisy squeak in the helm was recently added to the noises down below keep Sean awake more than he would like. Also a chaffing spinnaker halyard has meant Sean has been flying the larger spinnaker more often – which is good for boat speed but hard on the sailor as it requires more attention at night and especially during the squalls when the autopilot struggles to control the boat in the bigger breeze. Sean describes waking up after the boat gybed and how much work it was to clean up the mess and get the boat on course – fortunately nothing broke and sail was not torn! Sean has had to take care of a few other minor things on the boat as well as try to keep organized down below which is a never ending task.

The Pacific is not as isolated as it used to be. As well as the occasional squid and majestic bird, Sean has plenty of contact with civilization via his satellite phone. As well as the ability to talk to his friends and family and check in with the race committee, Sean has access to e-mail. The data connection is slow, worse than dialup slow, so Sean created a secret email that could be used to receive basic weather information, position reports, and occasional e-mails from close friends and family. That e-mail has become less secret as time passed and now Sean receives plenty of e-mails to keep him motivated as he approaches the finish.

It’s not all blue water sailing, a problem that has has gotten worse in recent years is debris in the water – especially since the tsunami in Japan. Sean, as well as racers in the Transpac, have reported debris as large as telephone poles floating in the water. A collision with an object this size or even something smaller while traveling at speed could do some significant damage to the boat.

Sailing to Hawaii is not as easy as pointing your boat west. The primary weather feature is the Pacific High. Typically, there is no wind in the center of the high, and increasing wind as you get farther south, up to a point. The polars of the Mini TransAt 6.50 favor the hotter angles in order to capitalize on the planing ability of the boat. Sean has to decide on a daily basis which direction to sail to maximize boat speed, minimize distance sailed, and maintain the right distance from the Pacific High which can move 100s of miles per day, sometimes in an unpredictable way. So far Sean has stayed fairly close to the rumb line, the shortest distance between the start and the finish. He has averaged a respectable 5.7 knot average and in his best 24 hours he was able to cover 162 nautical miles.  He has about 600 miles to go! Video here.

old but not in the way