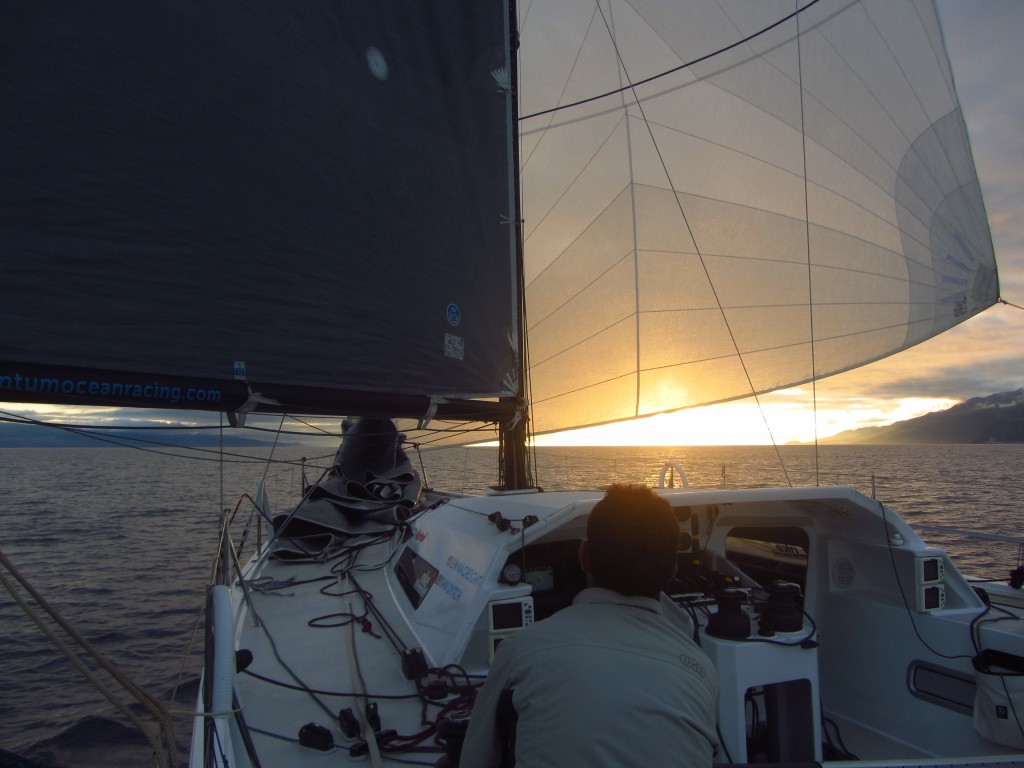 We’d stayed too far north at Finistere, so were already behind.   Rather than just following the rest, we took a bit of a gamble and went south afterwards.  Our weather forecasts showed more wind down there later on, plus a big left shift.     Neither of those things really happened, so by the time we got to the islands, we were still holding down 12th or 13th place, and had lost even more on the leaders.  Not great, but we knew where we’d gone wrong, and had come to terms with it.

Well, that’s that, we thought.  They’ll all be there by the morning report, we won’t, we’ve caught back up a bit, but not enough.

But at 0600, we were coming in south of Terciera (we’d decided to go south of the islands days before, as part of our setting up to the south plan, and thinking there might be more breeze down there, cause the forecasts said there might be), and there was a big pack parked north of the Island, and no one had finished yet.

We knew not to get our hopes up, but we did anyway.   No matter what, we’d compressed back on the fleet a lot, and as the overall race score is a combination of time from both legs, we thought maybe if we got a bit closer in finish times, we’d have a shot at the next leg….

And then we parked South of Terciera for a few hours. 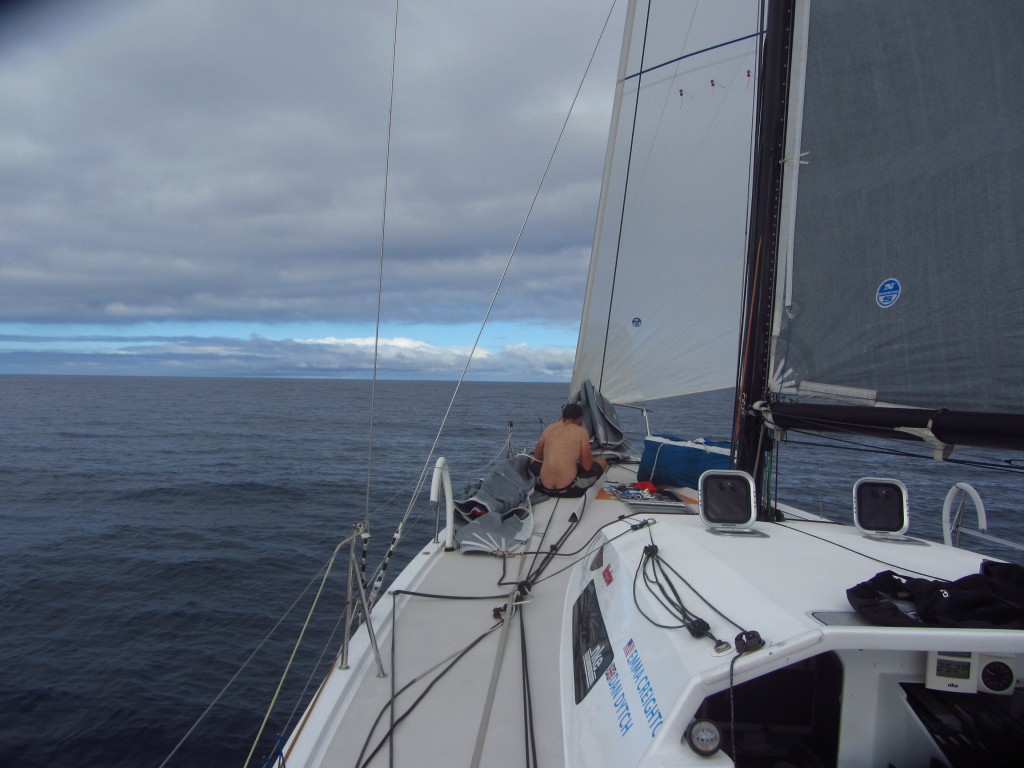 We finally got some breeze, and had a beautiful sunny upwind sail across to the gap between São GEorge and Pico, averaging 8 knots, feeling smug as we watched the AIS.   Strangely we could see boats 60 miles away (like Halvard and Miranda, Red, Jorg and Earwin), but closer boats that we could see with our eyes weren’t showing up on there.   Anyway, Seb finished at 10-something AM, and the other leaders were struggling, never doing more than 4 knots.

Earwin had gone between Pico and São George, and ended up third, so we had hopes that maybe, just maybe, we could get through there too, while the rest of the northern pack stayed parked north of São George…   but as soon as we got to the channel, the breeze shut off completely.   We had more than a knot of current against us, so slowly made our way to the cliffs of São George, where we found a little bit of breeze, and some pretty waterfalls.  These islands are amazingly beautiful, and sometimes I was able to appreciate that as we drifted along next to the black rocks and green cliffs, with dolphins all around.

At this point, the main battens started to be a problem.    In order to have any shape in the main at all, we have to have the top three battens tight enough that they don’t like light air jibes and tacks.   In the past, we’ve tried sending Dan up to kick them through, without a lot of success.   We’ve found more recently that the best method is to just drop the main, and then hoist it again, pushing the battens to the right side as it goes.   I’m just guessing, but I’d say we dropped and hoisted the main about 20 times in the final 24 hours.

At one point the breeze filled into the middle, and for a beautiful hour we were sailing absolutely in the right direction, with 5 knots of boat speed in 7 knots of wind, wing on wing with the code zero.

But that was only an hour. 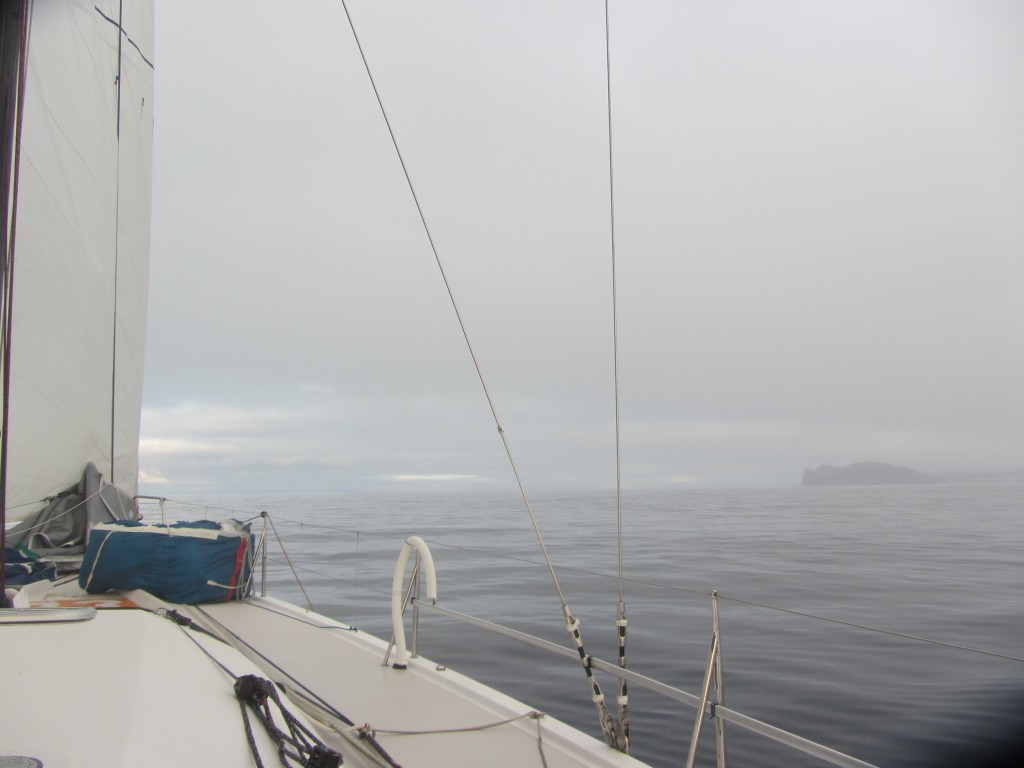 As it started to get dark, we made our way to the Pico shoreline, figuring thereºd be land breeze there, and watched sadly as most of the other boats arrived to the north west tip of são george and started turning the corner to Horta.  By the time we finished short tacking up the Pico coast in the tiny band of 6 knots of land breeze, we knew we hadn’t caught anyone, and were just getting on with it.

We had a nice little sail across from Pico to Horta, code zero in 7 knots of wind and the sun coming up, and finally finished in 13th at 0611, half an hour behind 12th.

So. onward.    We start tomorrow for the return leg to Les Sables.   It looks like light air, upwind.   It should be a real nailbiter to watch on the tracker… Not.   But it could be itneresting to see who goes right to the Portuguese coast for more wind, and who stays closer to rhumb line.    We hope to have a better second leg, and maybe finish a bit closer to the front of the pack…we’ll just see what happens and try to create our own luck!  Thanks for checking in.  – Emma.