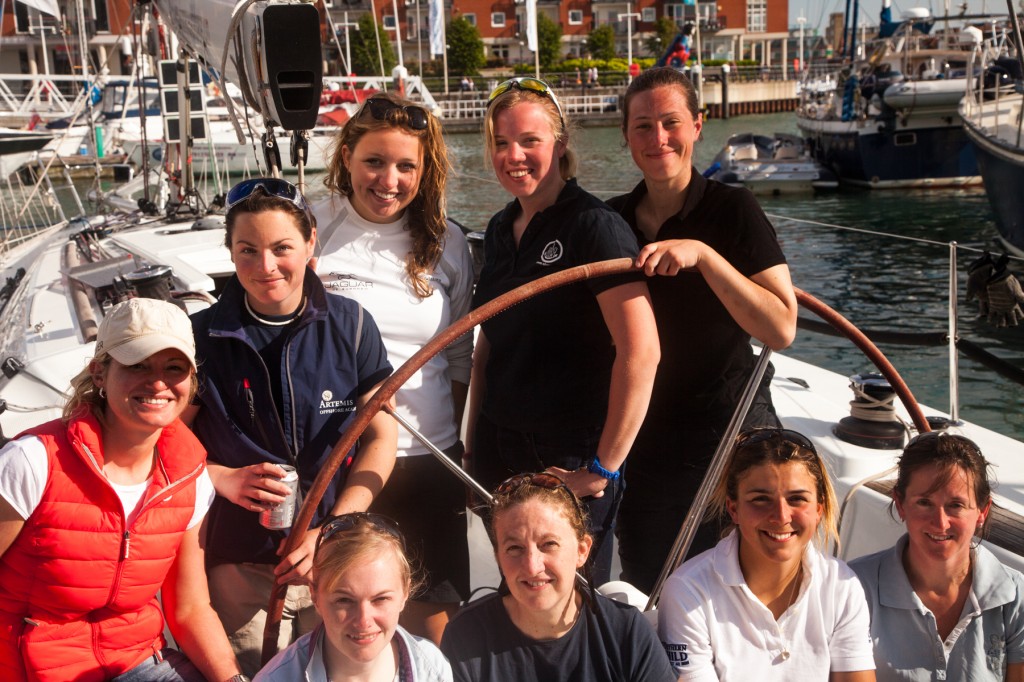 In the Spring of 2013, after the “Southern Child” (ex. “Smile and Wave”) program was up and running, Lucy Reynolds was approached by Louise Scanlon about doing an all girls campaign for the Fastnet. Louise completed the Fastnet in 2009. At the prize giving, Louise realized the girls’ teams had yet to finish the race and collect their trophies, including the Maite de Arambalza Trophy, awarded to the highest placed female skipper.

The chat with Lousie inspired Lucy to gather a team of women and enter “Southern Child” into the Fastnet, but with sights set higher than the Maite de Arambalza Trophy. Lucy said, “We are not campaigning [for the Fastnet] to [only] be an all women’s sailing team. We are here to say ‘why can’t there be a group of girls getting together to sail and win. Boys do it all the time.”

There’s not much stopping “Southern Child” from being a serious competitor. “Southern Child” is kitted out with the good stuff. On our first downwind leg, surrounded by the entire fleet, Lucy continuously giggled with joy as “Northern Child’s” (the boat Lucy’s husband was on) spinnaker got closer and closer. Every gust and lift was a valuable opportunity not to be missed. Soon, despite a hectic start, “Southern Child,” was picking boats off one by one.

The majority of the crew was not professional, and the Morgan’s Cup became a learning experience for the crew. Aside from Lucy, who has competitively sailed for over fourteen years, there were two to other professionals. First mate Debbi Smith, a retired British Marine, has sailed since she could remember, and this was most evident when she effortlessly helmed downwind using one hand. Katherine “Bertie” Whitley, who’s sailing CV includes multiple Caribbean 600s, 4 Atlantic Crossings, 3 Cape Horn roundings, and one summer in Antarctica.

At 10pm we rounded the downwind mark, along with the what felt like the rest of the fleet. Despite the excitement of catching up, dousing the spinnaker and becoming blinded by the flashing cardinal, everyone remained calm and the girls were focused on “Southern Child.”

Debbie reminded the crew be conscious of their actions to think forward and not go on auto pilot, “As the race progresses and confidence grows, remember to look up and see what you are doing. If what you’re pulling, does not work, then ask “why?” You might be pulling against someone on the foredeck and creating a dangerous situation.”

Debbie’s words of advice became particularly helpful when sailing at night. The majority of the crew was not trained to sail all night, so the girls did get very exhausted. Exhaustion can lead to laziness and fouled maneuvers. Nonetheless, each and everyone of the girls was incredibly keen to successfully sail. The biggest reason for such a successful race was the lack of egos on the boat. Jamie Evans said, “This is the calmest boat I’ve ever been on.” No one cried nor screamed– and if one of them broke a nail, the rest of the crew didn’t hear about it. 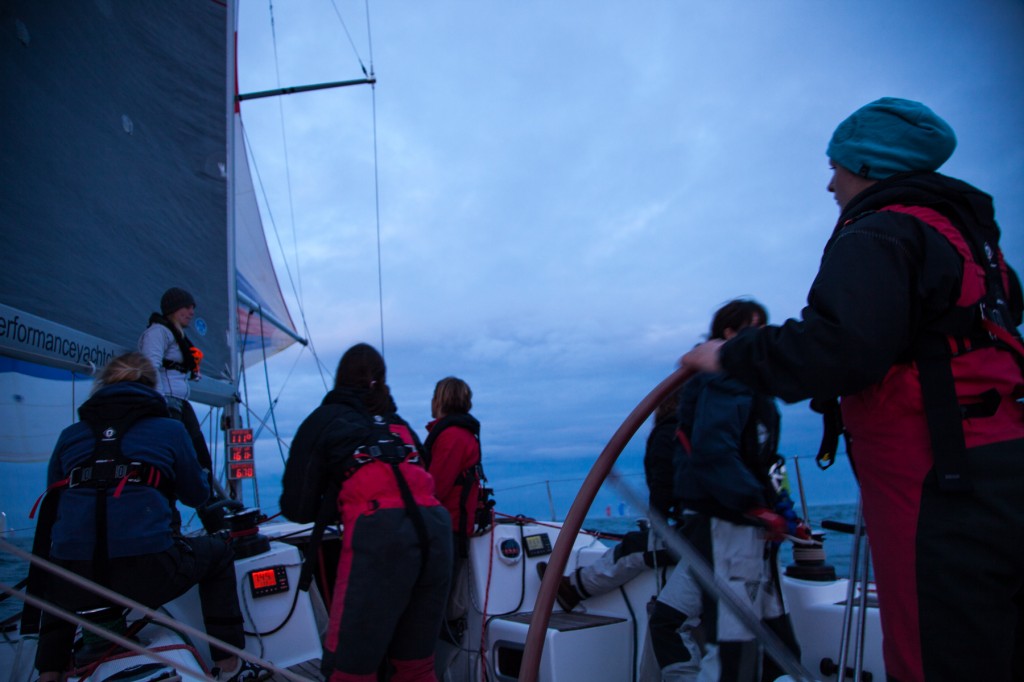 The race was a technical event as the girls battled variable winds, English channel traffic, and the infamous tides of the Channel– at night, of course. Yet, the vibe remained positive. The atmosphere allowed the team to enjoy surreal moments together. At 5am when the sun began to rise we cruised along at 7kts with the spinnaker. Bacon was sizzling in the pan. No other boats were in sight. The girls couldn’t help but giggle– where was everyone? Turned out, they were all behind “Southern Child.”

The girls had an unbelievably successful weekend. Not only did they beat Lucy’s husband and the boys on “Northern Child,” but they also beat the majority of the other boys in the fleet. The girls came 10th in class (out of 30) and 19th in fleet (out of 109). It goes without saying that the end of race rosé was well deserved.

This was certainly a humbling event for the men’s boats. In France, most of the men swallowed their pride, cheekily avoided eye contact, and hung their heads as they admitted defeat. Some men even spoke of their true jealousy; however, not in regards to losing to “Southern Child” but because Lucy “is a really cool girl” and they were jealous she will not be taking on any guys for the Fastnet. – Corina Halloran.