Our old friend Bruce Geffen may have gotten rid of Nice Pair – the sexy black cat that he sailed to multiple consecutive multihull victories in the Mackinac races – but he’s still a dark sider to the core.  This year, he’s aboard the rebuilt 50-foot “Lucky Strike” as they head up the lake this afternoon.  Track the race here and if you’ve got an IQ below 80 check this video to learn how.  Stick to the CYC Facebook Page for an ongoing stream of information.  With On-The-Water Anarchy missing their first CYC Mack in years, it’s good to see NBC Chicago filling in with live coverage for the Parade of Boats,. And of course go here for the latest weather and discussion.  The forecast is dire; we’ll have the best reports from the fleet right here. 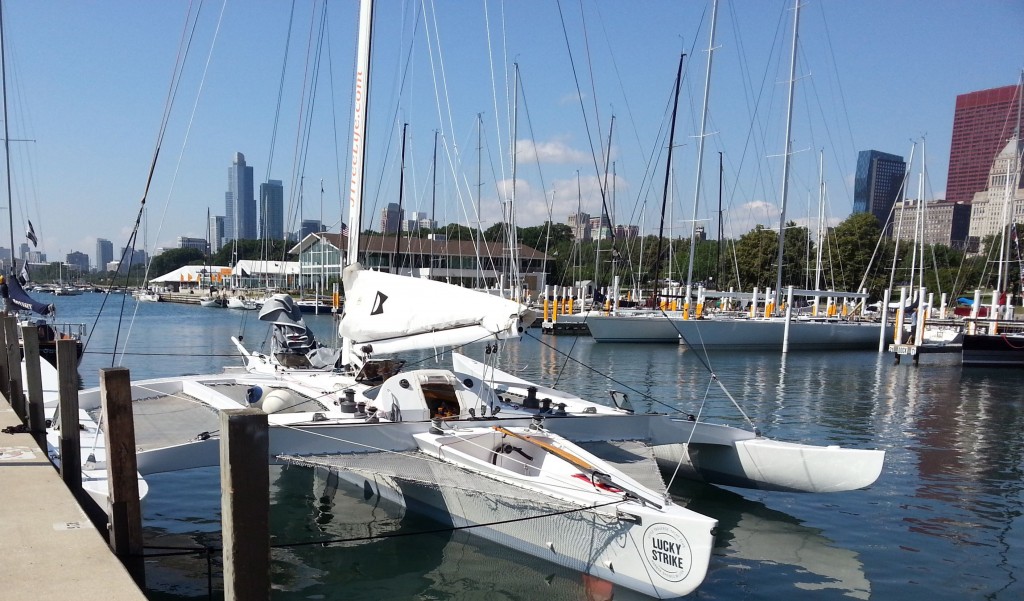 After having the aft crossbeam crack in the 2012 Bayview Mac Race, Manitou went through a complete refit and extensive rebuild.  Now named Lucky Strike, the 50′ Newick designed trimaran it’s back and better than ever.  New rigging, complete new crossbeam and deck area, rebuilt cockpit, a new self tacking jib, and the entire deck area it’s now clean and simple.  Her working area is user friendly, and the whole boat is stiffer than she ever was.  Freshly painted and the new press-and-stick non skid makes this cushy rocketship the prom queen of the multihull fleet as well as the Chi Mac fleet.  Fred Ball is the owner has brought together most of the crew from Nice Pair again due the third straight year.  On board is Jim Anderson, Kris Landman, father/son team of Earl and Hunter Lyden, and Bruce Geffen.  Looks to be an awesomely slow race this year, even by multihull standards.  Should be agonizing on a big yellow dump truck filled with lead!

Kiwis Andrew and Ken from Harbor Springs did the amazing rebuild of the boat.  Without their mastery and way over the top perfectionism, this would not have come to fruition so well.  These two are true craftsmen boat builders that are in a league of their own.