they are the jackals

If anyone deserves pity in the massive ‘ruddergate’ controversy, it’s Iain Murray.  We always suspected the salt-of-the-Earth boat builder and designer didn’t have what it took to navigate the minefield of modern America’s Cup politics, and sure enough (and regardless of the outcome of ETNZ and Luna Rossa’s protests) he’ll forever be known throughout the sailing world as the guy who tried to help Oracle change the design rules a week before the Louis Vuitton Cup.  It doesn’t matter whether he did or he didn’t, and frankly the guy’s reputation says he is honest and straight, but his lack of transparency combined with the timing of the rudder elevator issue makes him look to the world like he’s on the take.

We’re not going into the debate again – not yet, anyway – because it’s all here in the big Jury Notice thread.  We’ll just let Max Sirena tell it how he sees – from this Repubblica.IT story. 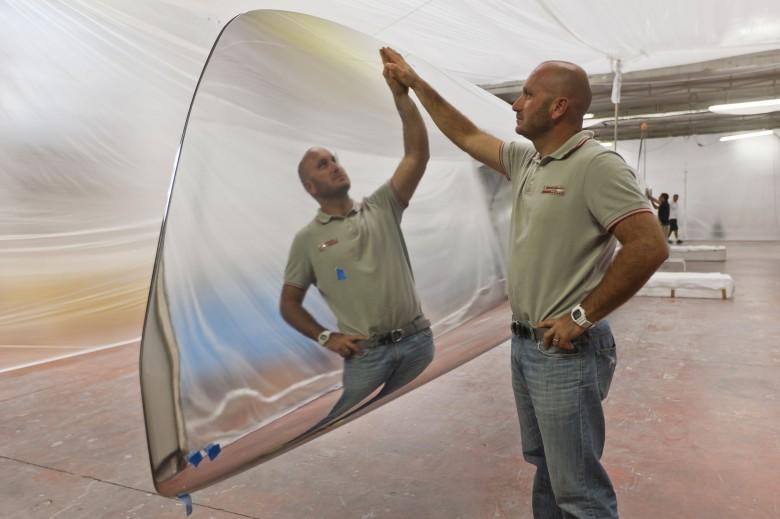 “Profiteering! That’s what it is.  Nothing else. Sorry to say because sailing is my life, my world, my sport. But we cannot continue to pretend that this is the America’s Cup of gentlemen, of fair play. It is not true at all. Oracle and Artemis are doing something illegal, shameful, and they are doing it by exploiting the death of ‘Bart’ Simpson, a sailor, a friend. And I am fed up of accepting everything in silence .”

Luna Rossa’s skipper, Max Sirena, is beside himself. Under the cloak of the usual silence that preceds the battle, incredible things are happening in offices that overlook the bay of San Francisco. And the man most representative of the Italian expedition in the Coppa America has decided not to remain silent anymore. To name names and surnames. Here they are: Paul Cayard, Russell Coutts, Artemis, Oracle: They are the jackals. The question is simple. On the eve of the America’s Cup Cup, Luna Rossa and Team New Zealand – the only two credible challengers to the Cup held by the Americans Oracle – have succeeded in three years of work to make fly their catamarans (called foiling, the boat is five feet from the water “supported” only by the centerboard, and it is much faster).

Oracle and the Swedes Artemis instead had judged it impossible to do from the beginning. So when they realized to be left behind, they began a frantic recovery.  Now Oracle is able to “fly” but not in a stable manner, needing to change the rudders in order to stabilize. The only problem is that you can not do that. To modify rudders as they want them, you have to change measurements rules. As if we were made to build a car with engine capacity 2000 and now a week before the race they want to run with a 2200. But the worst thing is that they want to pass this regulatory modification as a decision for reasons of safety. “

They are not for safety? “No there are not. They continue to use the term safety for changes that are only needed by them, and only for the performance.”

They are Oracle and Artemis?
“Well, there are four teams. We and Team New Zealand protested…. “

The rule amending the rudders is contained in the notice of race issued by the Director Ian Murray and on the basis of which the U.S. Coast Guard has given the go ahead.
” It ‘s clear that no one has evidence that behind this is the hand of Oracle. But Murray has no authority to change the rules of tonnage. For those it takes unanimity. Which there is not. “

The truth is that Oracle is in trouble …
“I am sure that in the end they will be very competitive. Now yes, they are a little back.”

The charge of profiteering is a serious charge .
“I know, I’m sorry. But it is so. They tell us that we are unsporting, a myth of sailing, Iain Percy (skipper of Artemis) has told that and it hurt me a lot. Actually it is them who are exploiting the incident of Artemis (the one in which on May 9 the sailor champion Olympic Andrew “Bart” Simpson lost his life, ed) to obtain advantages in water. By the way, Simpson died because he was unlucky, not because the class is wrong. The catamaran rolled over, anything can happen and will happen again. “

This does not cancel that there is a safety issue.
“And you say it to me? Of course it exists. I have been saying that since long before the accident. It was more than a year that I insisted with Murrey, with Coutts, Paul Cayard and they laughed in my face. Reduce wind limits – I said – enhance helmets, oxygen tanks, put straps on the hulls to held to in the event of capsize, prohibit the guest on board. They insisted, deaf. “

Until someone ended up dead.
“That, again, it was an accident. Anyway, it was right to intervene. They proposed 37 points to improve security: 35 were shared, while two were only needed to help Oracle and Artemis to regain lost ground . With New Zealand we have proposed: let’s pass now the 35 and we think about the other two. Cayard said, no, all or nothing. So I threatened to publish the response in the media. So you could tell who was trying to work for the safety and who for themselves. And we managed to have the 35 points passed. “

Then came the notice of Murray.
“Against which we did protest.”

It will be discussed on the eight of July. If they rule against you, up to what point are you willing to go?
“We may refuse to get in the water. It is a decision which may be taken only with the consent of Patrizio Bertelli, of course. But it is a matter of principle. Coppa America is a great game but also in games there are values to be respected.”

did they or didn’t they?