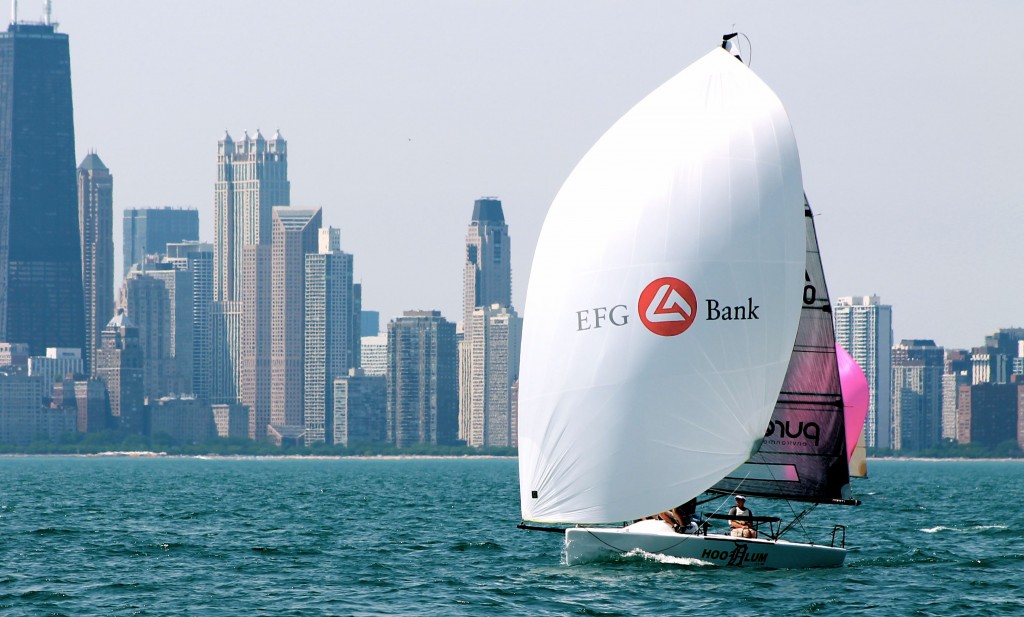 With Detroit’s Bora Gulari, Alec Cutler, Conor Clarke, Argyle Campbell, Bob Hughes, and Alan Field fully tricked out with top pros as they begin their run to the 2013 Worlds in SF, last weekend’s Gold Cup out of CYC Belmont in Chicago saw an unexpected player take one of the Melges 24 Class’s most coveted trophies.  The strange conditions weren’t the only weird thing about the weekend – a quick look at the results shows that 10 registered boats – including a bunch of locals as well as top-enders WTF and Black Seal — just didn’t show up, leaving just 14 competitors off of Belmont Harb “With a SW’ly gradient fighting a SE’ly seabreeze all weekend the wholes were huge, and we just kept grinding all weekend,” said new champ Paul Hulsey of Detroit’s Hoodlum Racing/EFG Bank.  It was Hulsey’s best result in years, thanks in part to the addition of Swizo-yank Chris and Dani Rast, who brings their massive talent as well as the EFG sponsorship to Hoodlum’s 2013 Worlds campaign; that, and an intense desire to win the Worlds.  Congrats to Hulsey and team (and to Hulsey’s week-old baby back home), and a big thanks to Alec Cutler for the report below; be sure to check out their Hedgehog Sailing page for more.  Oh – and Hoodlum’s for sale immediately after Worlds.  Ask the driver for more info.

UPDATE:  We’re told a smorgasbord of reasons kept those 10 boats from showing up.   A death in the family (condolences, brother A), an injured helm, an unexpected wedding, leaving a smaller group of unexplained.

Today rivaled yesterday in terms of weirdness, with a southeasterly thermal breeze fighting with a 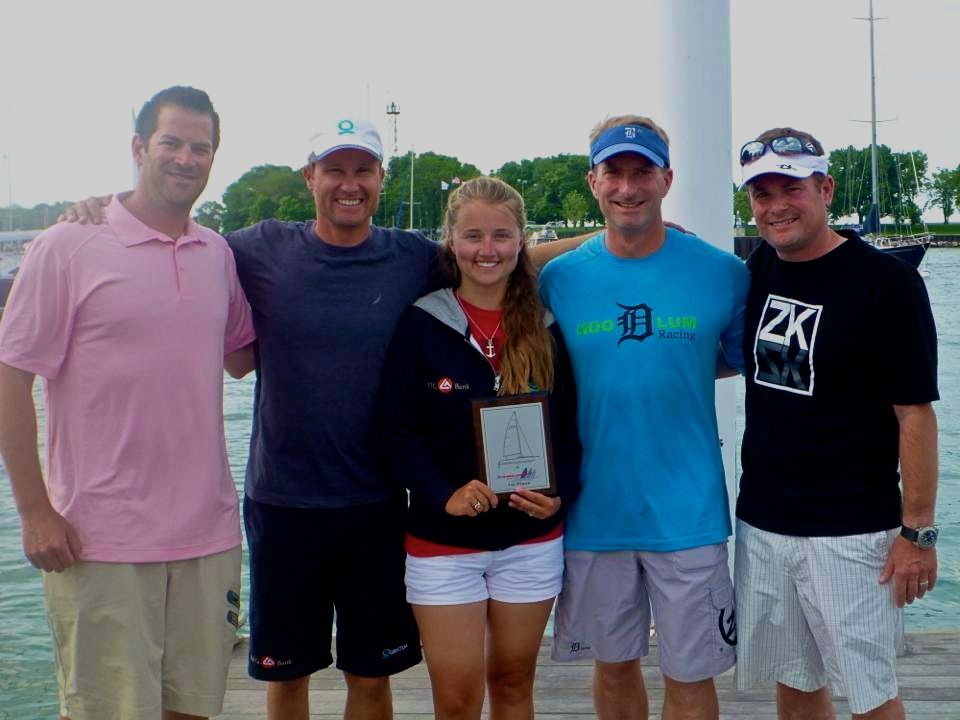 southwesterly gradient wind. The fight made for massive shifts and roving dead spots. As the windward mark was placed closer to the western shore and the gradient breeze, the fleet spent most of the time going up and down the right side of the course. However, that was also treacherous, as even when fully in the gradient wind, there were seemingly random patches of strong and very light winds. One minute we were fully hiked out ripping toward the mark, and the next we would be sitting in and watching helplessly as boats 20 meters to either side were sailing in 10 kts more wind. You didn’t sail into the holes or wind patches as much as they just appeared and disappeared. As best we can figure, the gradient wind was lifting off over the city, then touching down about 1/2 mile offshore, then lifting back off, coming down to the surface again, and repeat; sort of like millions of invisible bouncy balls being lobbed over Chicago towards our race course.

Hats off to the Hoodlum Racing and Rock N Roll teams for managing the minefields better than the rest of us. They finished tied with 26 pts. Hedgehog finished 2 pts back in third. It’s frustrating being so close and thinking about all of the shoulda, woulda, couldas, but that’s racing. Thank you Richard, Mike and Curtis for another leave-everything-on-the-racecourse effort. Also thanks to Max for your keen observations and special thanks today to Becky for patching up my head . Boom 1, Alec 0.

While we didn’t achieve our goal of winning, we did have a very successful week otherwise. We spent our training time working on our weaknesses – starts, light air speed, mode changes, and boat handling. The racing conditions gave us plenty of opportunity to test all of these, and all were much improved.

Next stop is the Pacific Coast Championships in San Francisco in August. Can’t wait!

Title inspiration thanks to Lumbajac.