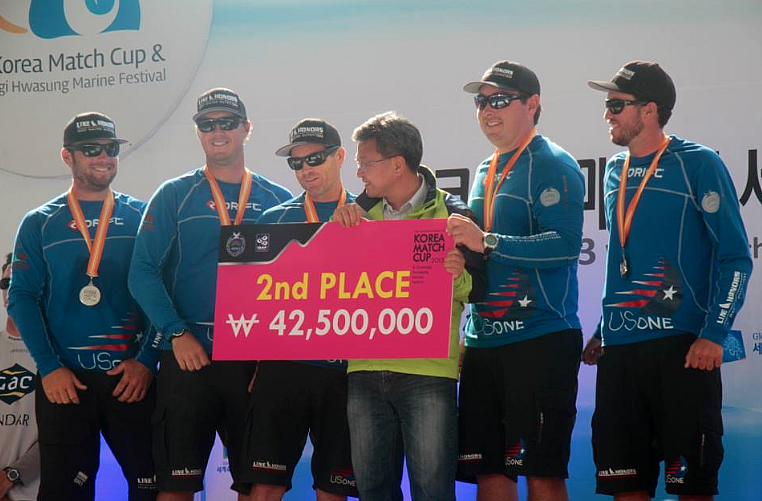 We’ve been following young US Virgin Islander Taylor Canfield for some time now; the talented, young Sailing Director of Chicago Match Race Center is clearly going places. But even Taylor fans are surprised at his meteoric rise in the World Match Racing rankings. With two strong regattas to open up his first year on the Tour, Canfield’s US-One team has vaulted into the number 2 spot in the world! We shot some questions off to Canfield – who’s off on yet another transoceanic flight for yet another big event – this time in Sweden.

TC: After competing in the first 2 events of the AWMRT this season US One is happily siting in 4th overall on the tour just 8 points out of the lead. With two strong finishes in both Germany (5th) and Korea (2nd), we could not be happier. So far, I am most happy about our teams ability to continue fighting through each individual race as well as the current round that we are sailing in. For example, while we did not end up making in through to the Semi-finals in Germany, we lost in an extremely hard fought series ending 3-2 after being up against the ropes down 2-0 in the quarter finals. The whole effort and positive morale of the team was awesome going into the third, fourth, and fifth race of the quarters.

On another note, the team showed great composure during several races in the semi finals in Korea where we were up against the ropes. In 2 of the 3 races we won, we were both behind and carrying a penalty. The ability for the team to overcome the tough situation at hand, pass the other boat, and shed our penalty on the finish line in both races shows that US One is here to win!

As far as what we are most unhappy about, I believe we need to keep working on our team communication. In high pressure situations, it is easy to place blame, use “colorful” language, and speak inefficiently to one another. As a team, we are working through how to better handle high tension moments and overcome them, rather than having them contribute to more mistakes.

SA: Are you surprised to be so consistently strong against the Minoprios and Williams’ of the world?

TC: Definitely not surprised. While both Williams’ and Minoprio’s teams are well oiled machines as well as both winning the tour, it is time for some new blood to take the reins. The drive and commitment level of US One is a force that allows us to compete at the top level and take wins from the best in the world. We go into every race the same no matter who we are racing; any team can take wins at the AWMRT level and it comes down to the focus and execution.

SA: We hear a lot of yelling out there; who holds grudges in match racing and who doesn’t? Do you have any true rivalries – guys you just want to stomp extra hard?

TC: Everyone competing on the AWMRT is our rival – all the teams have thee common goal of becoming the 2013 AWMRT Champion. But as you said, there is definitely some yelling out on the race course, especially in those high pressure situations when a penalty is going to be given, but you don’t know who it will go to. This intensity is one of the greatest reasons match racing is so much fun to watch.

I believe it is the intensity level of matches that will determine who your biggest rivals are. So based on intensity, I would have to say Robertson and Minoprio matches are always pretty intense and heated matches. For some reason there are always cameras on board and around when we are racing Minoprio…

SA: Where da chicks at in open Match Racing? WTF?

TC: Good Question. I’m not sure if it’s interest, or event availability. While I watch my crew exert every bit of muscle and energy each race, I would see it hard for a woman to match the force of one of my ~200lb trimmers. That being said, many events allow a women’s team sail with an extra person…is this fair? I personally think it is fine.

I believe that the Women’s Match Racing in the Olympics sparked great interest for women to get involved in match racing but unfortunately that was short-lived. There were challenges with it – the Elliot 6m kept them racing against only girls, minus the occasional training session. It’s great to see the WIMRA creating international events, but I’d love to see more women applying to the open events as well. Last week at CMRC we had the US Women’s Match Racing Championships– 8 teams out on the Tom 28s mixing it up. I coached a clinic to help them get up to speed on the boats. We had veteran match racers and quite a few first-timers trying their hand, which hopefully means we’ll start seeing more new female faces in the future.

SA: What will be your key to go from ‘solid’ to ‘winner’?

TC: As I said before, it’s all about the execution. Developing routines in every boat for every scenario at every venue will be the key to successful execution – especially in those high-intensity situations I mentioned before. Every team has the skills and drive to win the Tour, but the ability to consistently make the right decision and perfect maneuvers will allow a team to rise to the top.

Before the event, we will go back and watch video of ourselves and of previous years of the event we are going to sail. At the event, using our time efficiently during our limited practice time we have in the boat, and using the initial round-robin to sharpen our skills while hopefully putting some wins on the board. Our next stop is Stena Match Race Sweden on the 1st of July, and our overarching goal is to be completely on top of our game when the Tour comes to America at the Chicago Match Cup. We plan to represent on our home turf; after all, we’re “US One!”

I know how many readers Sailing Anarchy has in the Midwest, and I’d like to ask everyone to please come down to Navy Pier to cheer us on. With a real ‘stadium sailing’ atmosphere on hand, a cheering home crowd can provide as much advantage for us as it did for Lebron and the Heat. I guarantee we’ll deliver an amazing party, and hopefully we’ll bring home the silverware with your help!

is idiocy a crime?