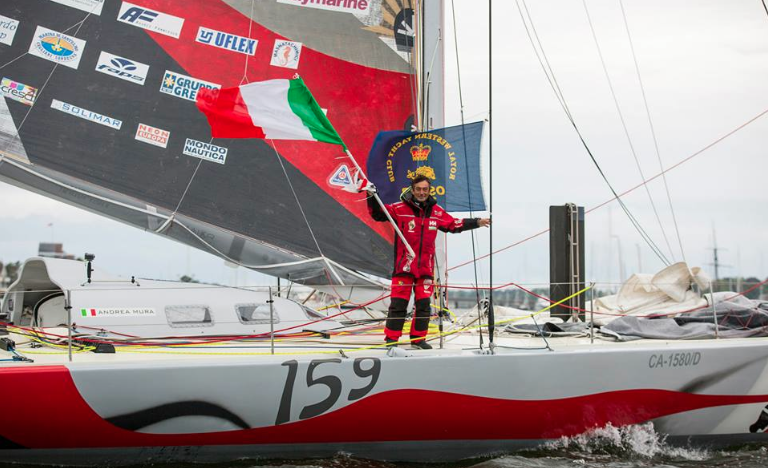 Just a couple of the OSTAR fleet have made it to Newport; Andrea Mura’s Open 50 Vento di Sardegna took line honors while  Roger Langevin was the first multihull home early this morning.  And while Jonathan Snodgrass literally just restarted from Wales after losing a mast two weeks ago, another Jonathan – SA’er Jonathan Green aboard Jeroboam –  is having the race of a lifetime; his Bennie 35 trails a racy Class 40 by just a hundred miles after 3000 odd miles…we’d say that’s pretty good!  Jonathan should have one more good night before a well deserved rest; here’s his latest report; follow along in the thread and track them here.

There’s been no rest for the weary managing through the breeze transition last night and today. Just when I think I’m pushing the spinnaker too much and switch to double headsail reaching, the breeze slacks or shifts or both so get up there and set the kite again. This happened six times today. I’ve been pretty aggressive about carrying sail so I’m happy with the performance through the transition.

Now we’re back to beating as two lows are forecasted to come rambling across the course. Both appear to be tracking way too far north to get on top of them for some downwind action so it will be a nice long beat all the way into the barn. 15-20 out of the SW is nothing to complain about though it will probably be lighter as we get in toward RI Sound. With less than 500 nm to go, this is the final push here at the end.

Earlier in the race, during some of the beating stretches, I noticed Pathways can hold a very tight angle, tighter than Spirit and certainly tighter than Jeroboam but I found that if I didn’t pinch up too much, I wasn’t keeping pace but I wasn’t getting slaughtered either. Anyway, I’ll do my best and see if I can at least stay in the same ballpark as these guys.

I got the boat all prepped for more beating: dried out the spin and staysails a little and stowed them, secured all the running rigging, aired out the cabin a little. I’ve been charging the batteries with the engine lately trying to run down some of this fuel on board to lighten up a little. I’ll also be making less water each day as I work through the reserves. This boat definitely performs better light so I think every bit counts.

The sun made a number of appearances today and I’m hoping that as this SW breeze settles in, we’ll have some milder temps. The fog just rolled back in but the sun is still shining. How does that work?

Ah, the old familiar sounds of beating up wind; the creeks and groans from the boat, the strain of the autopilot to keep a course, the pounding of the bow into waves, the flogging of sails as they’re reefed and unreefed, then reefed again, then unreefed, then reefed. Lots of intensity shifts last night and today have kept me hopping trying to keep the boat moving at max speed. There will be plenty more of that over the next couple days as the forecast has the wind strength constantly shifting along my route.

The 2000 UTC position report shows Pathways doing 7.5 knots! He’s over George’s Bank so I hope some of that is current. It’s been fun trying to keep up with those guys but I’m definitely out classed. The best I could do this afternoon was about 6 knots but I just found a little current myself so I’m getting another two or three tenths out of it. Who knows how long it will last.

Speaking of George’s Banks, I have all the tidal current charts out and am trying to see how my approach and timing will be impacted. There’s not a lot I can do up there except perhaps delay a tack by a couple hours to ride/avoid some current as I’m more restricted by winds shifts. As RM likes to say about the Bermuda race course: wind trumps stream.

I’ve been good about rationing my fresh fruit. I just ate my last orange and still have some apples kicking around. Amazing they lasted so long without refrigeration. On second thought, they had plenty of refrigeration.

Slimed ,From the NY Times: