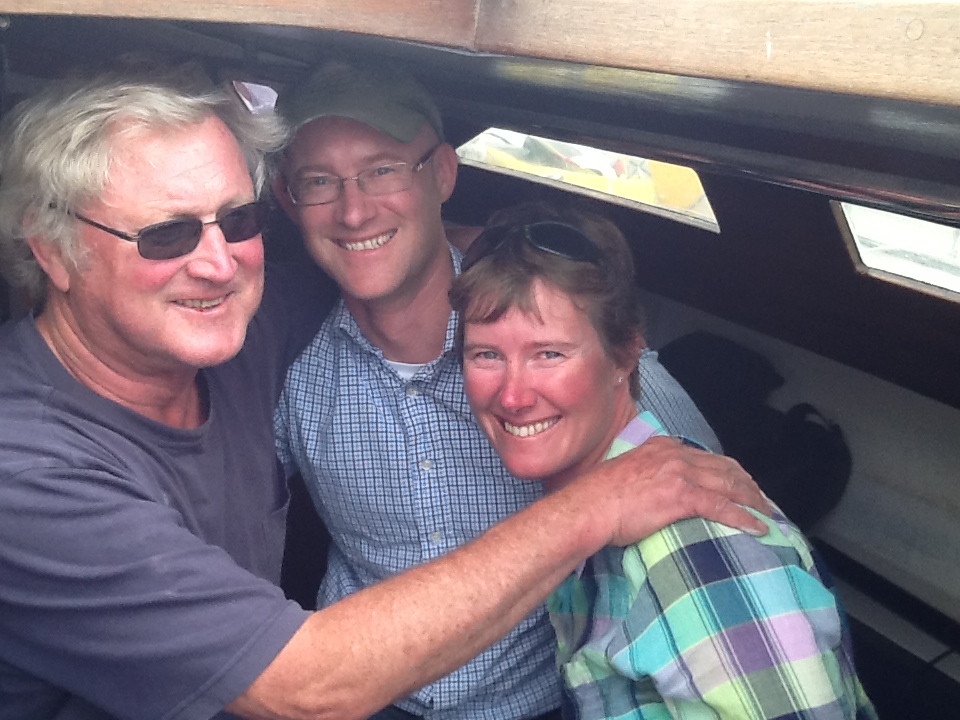 Ashley Perrin, one of our all-time favorite hard core sailors tells a story that we’d all like to tell…

It is Monday morning (Memorial Day) and I am off the Monterey and we are going in circles behind an ocean going tug because the weather window has closed to get around Deception. Our destination is Long Beach. Everything up until now has gone according to plan. Commanders is telling me there is now no window till Saturday morning and not to go south of 35 as there is a bad sea state and it blowing more than 20 knots which is our self imposed limit. I have a flight to catch Thursday night it has been planned for several months however, seamanship like decisions must come first. So I persuade the tug boat captain to take us to San Luis Obispo to make the next decision. The grib files are telling me it is a bad idea to hang out in our current location. Off we charge at 9 knots every three or four hours we stop and change out the chafing gear that is protecting the nicely varnished cap rails.

The sea state starts to build we are surfing into the towing hawser and the bridle is twisted so we are loading up on the starboard one more than the port. Time to stream out the handy truck tires on a 400 foot anchor line off our port stern. One is not enough – two works a treat and she tracks in a straight line and stop surfing into the hawsers. Life is good – we are moving South towards LAX.

Every thirty minutes we talk to the tug boat and 90% of the time all is well. It is now 2am and we are closing in on San Luis Obispo the wind has picked up and so have the seas. I am looking forward to anchoring as the ride has become a little more interesting. The maneuver we have to pull off has risks. The tug boat must slow down us and herself, we need to disconnect the bridle shackle, pull in our tyres, and side tie to the ocean tug. Then into the anchorage drop our anchor, set it using the tugs power and disconnect. All this with no steering or power of our own and add darkness.

I dial a bouy again on the mobile getting the wave data from Harvest and the wind data from Santa Barbara. The wind is hovering at 20 knots and the seas at 6-7 feet at 6 seconds. Back on the VHF to talk to JJ on the tug before we pull the plug and I miss my flight. Not only will I miss my flight but we are committing to $15k in costs to hold the tug in standby mode in San Luis Obispo plus another $5k in crew costs. The boat is still in great shape and she has coped well so far – the tyres are working a treat. The risk is being in conditions outside our insurance endorsement but do I fully trust the forecasts when real time is within the endorsement. Many decisions for 2am! I make a commitment. JJ can have us off Deception at 6am we are going for it.

The ride down the Santa Barbara channel was lively especially when we ended up side on to the swell to get into the traffic lane. I pulled rank on JJ and requested a change of course and to stay outside the lanes. We could do without waves breaking over the bimini. It was the right decision and we pulled it off arriving in Long Beach at 11pm Tuesday and were at the dock at midnight. Time to remove the insurance towing hawser, trash pumps and get our mast and boom cradles off of the tow vessel before they headed home.

Wednesday morning up bright and early to remove the boom and get the mast ready for removal. Thursday remove the mast at 110 feet she is a beast and it is much easier said than done. There is more hydraulic, electrical and electronics sprouting out the mast base than wiring in most people’s houses. Once it was out it became a bit of project to get her horizontal as she is so butt heavy but after a while she was in the cradle and we were stripping her halyards out. I had to leave the yard at 3pm my flight was at 5:45pm.

The week had flown by and I was on the plane bound for London to surprise my father. Every year for many years the five Perrin’s had sailed Santana (an Express 27) around the Isle Of Wight in the Round the Island Race. This tradition had fallen by the wayside when mum had a particularly bad bout of sea sickness and Daniel (my older brother) and I had moved to the US full time. Since then we had purchased a new Schumacher design a Capo 30 also called Santana. This year Dad’s health has been suffering and he now he only does one race a year on the boat – the Round the Island. So the idea took shape back in March – I called Daniel and asked him if he could take Friday off and fly from New Jersey to London.

Friday morning Dad still has no idea of our surprise. Myles (my little brother) is organizing the crew he told Dad he was bringing David (trim) and Anne (foredeck). Daniel and I are standing on the curbside at Heathrow and my mother arrives in her Fiat 500 to drive us down to Hamble. We get to the boat Dad is off somewhere and we hide down below. Dad’s rigger comes down below and is surprised by two random people sitting on the couch. Dad eventually gets to the boat we are covering our mouths from giggling so much. He walks into the companionway and looks down at us. Now if he had been a woman he would have screamed but Dad just got a big smile on his face and asked ‘what are you doing here?’. Well Dad this is David and I am Anne!

Needless to say we were jetlagged out of our mind. We had a 6am start so Daniel and I stayed on the boat and were still in our PJ’s as we came down Southampton water. Daniel did a great job seeing as he hasn’t sailed in 4 or 5 years on trim. Myles of course helmed superbly, Chris put us in the right place tactically, Dad continued to smile all day despite parental abuse from his kids, Neil did a great job trimming the main and I between sail changes had a nap behind my sunglasses. It was stunning weather for the UK with bright blue skis and sun and by 8:30am we were almost halfway through the race.

We took a pontoon in Cowes and met my mother for the obligatory fish and chips at Corrie’s cabin on Cowes High Street before loading the boat up and heading back to Hamble. Daniel and I retired for a nap below and did the clean up until 9pm. Up at 6:30am Sunday for a quick trip back to Heathrow and our flights back to the US for work on Monday. The result of 2nd in class and 51st out of 1459 was quite frankly icing on the cake. Dad’s email says it all

‘Thank You all so much for the greatest surprise! Starting with Friday night we had a great time and sat gave us a splendid result to share in my special year You are the greatest, I personally was so thrilled to be able to get around the island and with you all doing all the work I just needed to say I have a great family!’