Slowly but surely, a quiet Western Long Island Sound club has been filling in the gap left by another dead-and-buried Sailing World NOOD event; here’s a day one report from Anarchist “Left Hook” 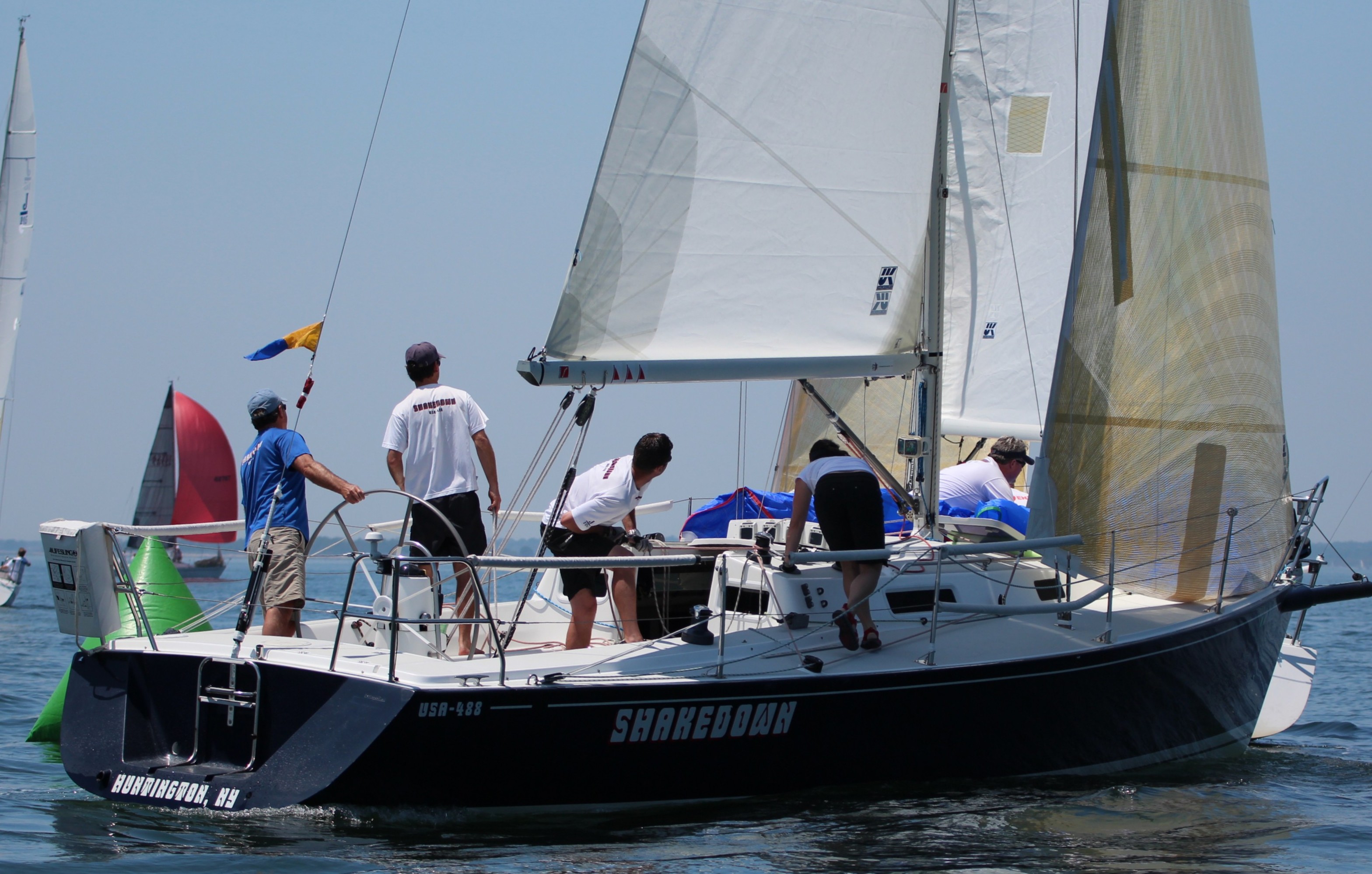 Take 10 racers who have done all of the major regattas on the Eastern Seaboard, put them in a room and ask them what they love the most about their favorite events. They’ll come up with loads of opinions ranging from professional race management, dependable breezes, strong competition and easy logistics to tent parties, music, hot food, beer(!!!), a central party atmosphere and a welcoming club. Then lock those 10 people into that room for 2-3 weeks and by the time they emerge they will have come up with the Cedar Point YC One Design Regatta.

That’s basically what Cedar Point’s organizing committee did a few years back; With the Larchmont NOOD dying off, the CPYCODR became the only dedicated one-design event on Western Long Island Sound, and we wanted to make it the best event we possibly could.  So we did.  Our formula? Take loads of different boats, give them a weekend of top-flight racing with generally glorious summer seabreezes, bring them all back to a welcoming club of die-hard racers and throw them nightly parties with mountains of chow, gear giveaways, music , flowing taps and NO expensive party passes.

Fast forward to this past weekend, which marked the fifth straight year of growth for the CP One Design Regatta. Despite the continually tough and uncertain economy we’ve managed to steadily grow entries; with over 90 boats on the line, we’re twice the size we were in 2010; much of the increase coming from our dedicated sportboat circle, where the Viper 640s raced for their Northeast Championship and the J/70s already have a ten-boat fleet.  On the big boat circle 50+ teams duked it out; the Soverel 33 for their National Champs, with the J/92 class sailing their first major one-design regatta in the better part of a decade. You could say that the formula appears to be working.

Today, the first day of the event, dawned warm and light but with the promise of great breeze everyone got off the dock at 0930 and out to their respective circles.  Following a period of waiting for the breeze to fill in and stabilize each course got off in a light breeze. The Viper 640s and J/109s were pushing very, very  hard and notched up a string of general recalls over the course of the day. After lunch the breeze filled in and solidified and by early afternoon each course was racing in glorious sunshine and a warm, puffy breeze of 12-18 knots which was more than enough to get the sporties planing and the big boats rumbling fast. Each fleet seemed to be enjoying pushing each other hard and stayed out racing until well after 5 PM.

But that doesn’t seem to be enough for the competitors who appear to be as intent on partying as hard as they raced. The kegs are tapped, the tent is filled and there’s a mysterious red gas can full of alcoholic jet fuel  being passed around from drinking team to drinking team. My view from this laptop sitting on the lawn next to the beer keg and the cornhole game while 200+ racers mingle about and shoot the shit about how their day went is about as good as they come; and the dinner buffet opens in 20 minutes.

You can check out all of our news and updates on our Facebook page, and of course we use Yachtscoring for results; check them here.