you fuck one sheep…

Michael Hennessy and Rob Windsor on Dragon went from heroes to zeroes on the first leg of the 2013 Atlantic Cup.  Here’s how it happened – from Mike’s keyboard: 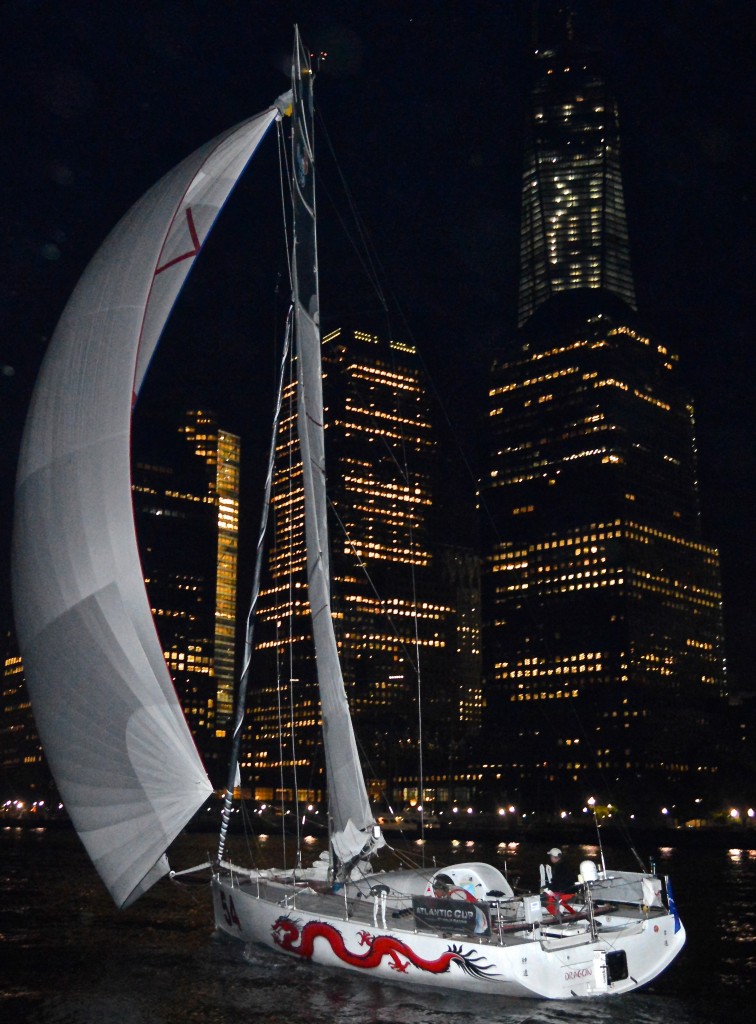 You might have heard the story:  You’re a good person.  Someone who loves his family and friends, who works hard, gives back, pets dogs and kisses babies.  A pillar of his community, with a reputation built through years of contribution.  But get caught just once behind one happy, good looking ewe and *poof*!  Just like that you are a sheep fucker forever. Or a Kiwi, as commonly known.  Or Aussie if you listen to the Kiwis.

My sheep fucking moment came at 3:00 on Monday, 25 hours into the race.  I had done pretty well up to that point, if I dare say.  I had timed the front an my arrival at the Gulf Stream perfectly, reaching the advantageous current just as the front moving over top the boat freed us to gybe right on to track for Hatteras.  Then we sailed with abandon and a dash of skill through the first night and next morning in blast reaching contions, allowing us to reach Hateras right at the front of the pack.

Then we managed the transition to lighter air as it clocked forward.  While we lost some ground to Bo Dream andd Le Coq who were deeper in the Stream and had better current, we were within spitting distance and even crossed within two boat lengths of Le Coq on Sunday night, and were making time on the boats inside of us.

Then Monday we were diving to the west, still looking good, and I got distracted by an ewe.  That damn sheep came in the form of gribs that showed a clock to the west. We were on split boards at the time, with no favored tack so when the shift came we made our move and went back east.  Bad, bad sheep fucker.  Had we only kept going we would have covered every one but Bo Dream.  But no…..we commited the cardinal sin and now we have paid a hefty price. Sheep fuckers.

At this point, all we have going for us (beyond charm, wit and dashing good looks) is that we are stubborn, won’t ever quit, and are east of the pack we chase. We have to sail fast, and hope the wind dies for them.  The 0600 report shows at least some of them sliding to the east, so some of that advantage may have been erased along with better boat speeds for them as they footed off, but I will remain optimistic and hope that we end up getting judged for more than that one cute, flirty sheep.

Update:  Mike and Rob didn’t get DFL, but close.  On to the next leg!

We finished leg one of the 2013 Atlantic Cup at around 11:00pm in New York City last night. It was very cool to come bombing in from offshore in a 25 knot breeze behind us and doing 15 right into Ambrose channel and the shipping lanes of one of the world’s busiest ports! We doused the kite and got out the jib as we approached the Verrazano Narrows Bridge and the wind went all squirrelly as the tides for different rivers came together. We then had to get the kite back up and were sailing rather leisurely to the finish line just opposite the Statue of Liberty when we heard our competitor Dragon call in to the race committee that they were right behind us! So Tristan and I got to work and gybed about 6 times in the light and flakey dead downwind conditions and finished in 5th place, about 5 minutes in front of Dragon after 650 miles. All seven boats finished within 3 hours of one another so it is clear the racing is very close. We were disappointed in not finishing on the podium for sure but are resolved to sail harder, faster and smarter in the next offshore leg to Newport and in the inshore series. We look forward to the pro-am race here in NYC on Friday and then for the next start on Saturday.

Thank you all for your ongoing support.